There are few differences between Oregon sprinters, and twin sisters, Venessa and Kerissa D’Arpino.

Growing up in Grants Pass, Oregon, they lived in the same room together for 18 years, shared the same friends and drove the same car. The similarities continued on the track, where they run with an almost identical stride, and together have 21 North Valley High School track and field school records.

“I think people are blown away that twins can be on the same team, that twins can do the same thing,” Venessa said. “For us to be pretty identical in everything we do, and what we look like, it’s just mind-blowing to some people.”

After sprinting for three years at Oregon State, where Venessa set three school records, Team D’Arpino (a nickname given by a meet announcer) brings its stride to Oregon, where the sisters hope to build on the Ducks’ sprinting legacy. 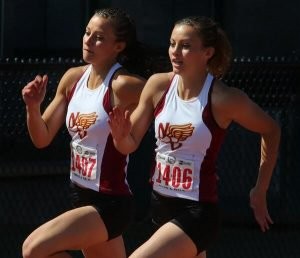 Twins Venessa and Kerissa D’Arpino race side by side in a high school meet. The sisters transferred from Oregon State to Oregon this season. (Photo courtesy of Aaron Samuelson)

“This team is home. Like everybody is very welcoming,” Venessa said. “This is the dream school and a lot of people wish they could be here.”

Growing up as twins — Kerissa two minutes older than Venessa — the sisters naturally competed in everything; from grades to friends, to who had more money in their bank account.

“Learning how to ride a bike first or learning how to do anything, one always had to do it better,” said Sherry D’Arpino, their mother. “It was always, ‘Who did something first?’”

Together, the D’Arpino twins started track and field in the seventh grade, but it wasn’t until the end of their sophomore year of high school their sibling-competition formed a backbone to their motivation.

“They had a drive I have yet to see in another athlete in my 10 years of coaching,” North Valley sprinting coach Terry Guthrie said. “It was one of those things that you could see it in their eyes and in their body language and the way they approached their competitions. They just had that thing that other athletes didn’t.”

At the 4A Oregon High School Track and Field State Championships their junior year, Venessa swept all three sprints with school-record times. It was the first time that someone from North Valley had swept all three races in the 4A state championships since 1998 when Guthrie did it.

The following year, Kerissa won the 100m and 200m while Venessa took the 400m-title in the state meet. The twins’ record times that year helped the North Valley women win their first ever 4A State Championship.

“They changed the face of North Valley,” said North Valley head coach Aaron Samuelson. “It almost seems unreal with some of the things that they were doing.”

As a Duck, Venessa set a personal record in the 60-meter dash at the UW Indoor Preview in January. Kerissa is out this indoor season but hopes to return after recovering from detached rectus femoris muscle surgery.

“With Kerissa being down, Venessa is all, ‘I have to be good, not for both of us, but for our name,’” said Brian D’Arpino, their father.

Even though they have trained and competed with each other their whole lives, the twins have learned that crossing the finish line is something they have to do separately.

“In high school, one time we actually tried to hold hands as we were finishing the 100-meter dash,” Venessa said. “We went to grab each other’s hand and one went backward and one went forward, it was like a slingshot. We almost got disqualified for crossing lanes and we ran really slow times, but it was worth the memory for us.”

In college football today we often expect our athletes to be involved with a second sport.

I would prefer that Oregon native, University of Oregon graduate and Eugene resident Ashton Eaton only break the decathlon world record at his home track, the University of Oregon’s Hayward Field, and maybe he would as well. But athletes can’t choose where and when they break a record. If they train and prepare well enough […]

The Oregon Women’s Track and Field team will enter next season missing a key piece. Former Oregon Athlete Jenna Prandini, who made a name for herself this summer at the NCAA and US Track and Field Championships made the decision earlier this week to hang up her Oregon Uniform and sign a professional contract with […]

Fomer Oregon Duck track and field standout Brianne Theisen-Eaton will one of the first athletes to compete at the 2015 Track and Field World Championships in Beijing this weekend. There’s some speculation that she and her husband, 2012 Olympic decathlon mold medalist and former Duck Ashton Eaton, will make history by achieving a “golden double” […]

In Track and Field, no individual award

When it comes to Tracktown USA, and Eugene, Oregon, former Head Coach Vin Lananna has put his own personal and professional stamp on the moniker. After coaching the Oregon Ducks for thirty-five years he has been an instrumental force in bringing elite Track and Field competitions to Historic Hayward Field, including the Olympic Trials and […]

Former Oregon Ducks Ashton Eaton and Brianne Theisen-Eaton recently launched a new website, WeAreEaton.com, to let people know what they’re up to as both try to win gold at the 2016 Rio Summer Olympics. The site is trying to increase the fanbase for Brianne and Ashton by drawing people together who follow one or the […]

The Oregon Ducks Track and Field teams ended their seasons on a high note. The Men’s team won back to back National Titles and the Oregon Women won their first team title in thirty years. Much of the success in the NCAA Championships this season went to Junior Jenna Prandini who participated and scored in […]

Oregon Ducks Junior Jenna Prandini has had a very special month of June, complete with NCAA Championships and National Championships. It all began just over two weeks ago for the multi-event student athlete. At the NCAA’s she earned points in all three events she participated in, the 100 meters, 200 meters, and the Long Jump. […]