The game against the Cal Poly Mustangs proved again what a great defensive effort can produce.  The girls came out with their full court hounding press and created numerous turnovers resulting in easy baskets.  In addition, the girls were hot from the three point line. They nailed several of them and I could sense the frustration from the Cal Poly bench.  Every time they made a move, Oregon would respond and add to their lead.  The game was soon out of reach.  Cal Poly settled down later in the third half and made more baskets but Oregon would answer right back.  I would imagine that if Oregon plays this way during league, the team should do quite well in the standings.  The Oregon team has some very good players.  I observed numerous passes to open player for easy baskets.  They are really beginning to play as a team.

I also want to comment on what a great image they are creating within the community.  The Pleasant Hill girls basketball team was at this game.  Bev Smith, an Oregon great, talked to the girls during halftime which was appreciated by the girls and their parents and coach.  After the game, numerous oregon players came back to the court to spend time with the Pleasant Hill team.  They were signing posters, posing for pictures, and just intermingling with the girls.  I have numerous photos of the interaction and will see about posting them soon. Great job Oregon players!  You are making a difference.

The Oregon Duck women’s basketball team battled the Southern Jaguars from Lafayette, Louisiana.  This was a pretty physical game where numerous players were on the floor.  Quite a number of fouls were called during the game and Oregon took full advantage of the opportunity.

The Ducks came out playing intense defense which set the tone of the game.  There were many opportunities for easy baskets.  Although, the girls missed several point blank layups.  That should be easy to rectify.  Once again, the girls scored over a hundred points.  The offense seems to be really clicking at this point in the season.  This bodes well for the start of the Pac 12 season.  If the girls can play with this intensity during league play, I have a feeling Oregon will surprise most of the teams.  Great hustle equals points and take-aways.

This game also welcomed Liz Brenner back on the basketball team.  She contributed on both ends of the court. She adds another dynamic to this already successful basketball team.

My reaction to the game against Portland State was WOW!!  The team came out and played hard from the onset of the game.  The defense was intense tonight.  They were in full court press most of the evening which is what allowed them to run away with the game from the tip off.  They created numerous turnovers which led to points.  The girls played an exceptional game tonight.

It was great to see some of the players that don’t get a lot of minutes during tight games get a chance to see the floor.  They continued the excellent play of the starters.  The bench enthusiastically cheered when one of the subs scored a basket.  That was great to see.

I do hope that the size of the Pit Crew expands in the upcoming games.  They provide a lot of spark for the girls.  Next Friday, the Pleasant Hill Middle School basketball players will be in attendance.  They will bond with the U of O players after the game.  I believe there will be a shoot around and intermingling with the Duck player.  Nice to see that kind of support for up and coming players.

If the Ducks play the remainder of their games with this fire and intensity, they will come away with some W’s.

Tonight’s UO women’s basketball game against the Princeton Tigers started off pretty good.  Both teams were shooting the ball well.  Oregon was hitting the three point shot to start the game but tapered off as the first half wound down. 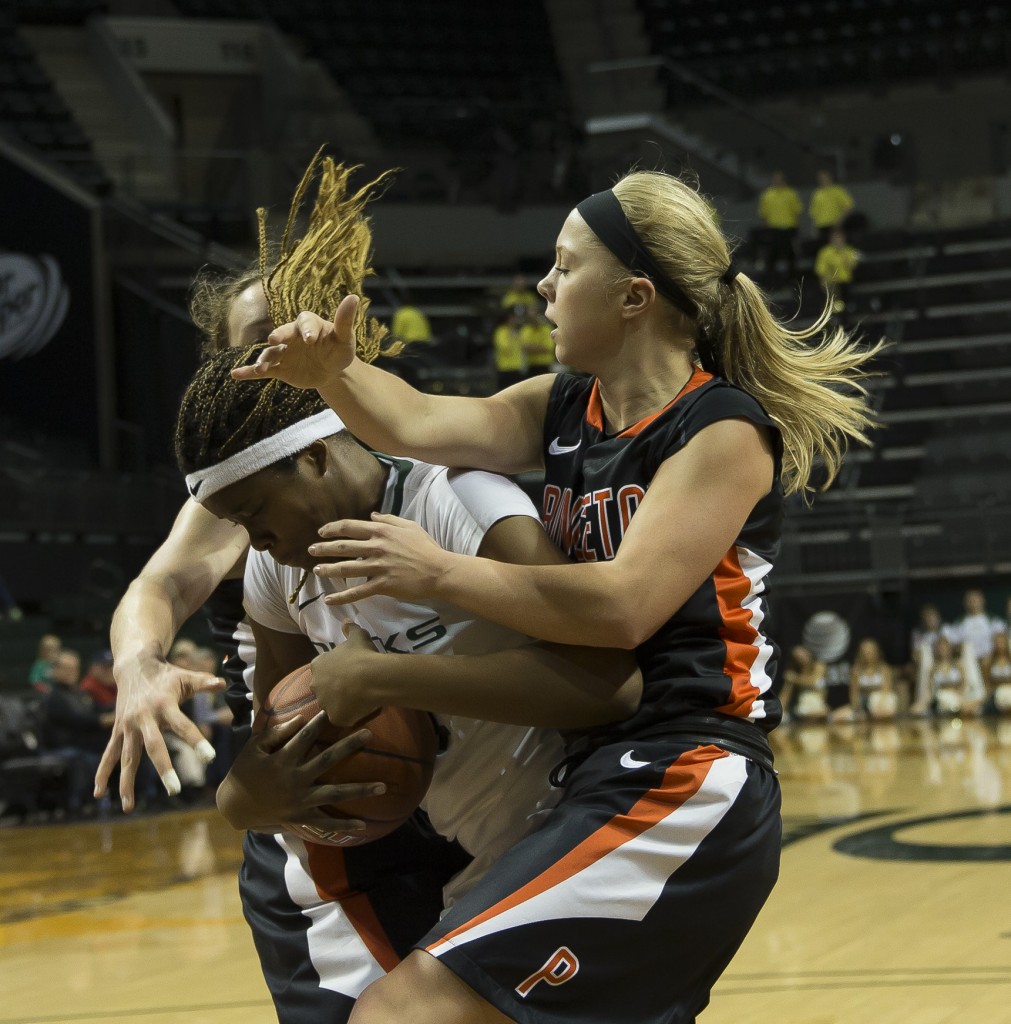 Oregon seemed to be trying to play at a pretty fast pace and as a result, turned the ball over on numerous errant passes.  Princeton made the Ducks pay by forging a double digit lead at half time. 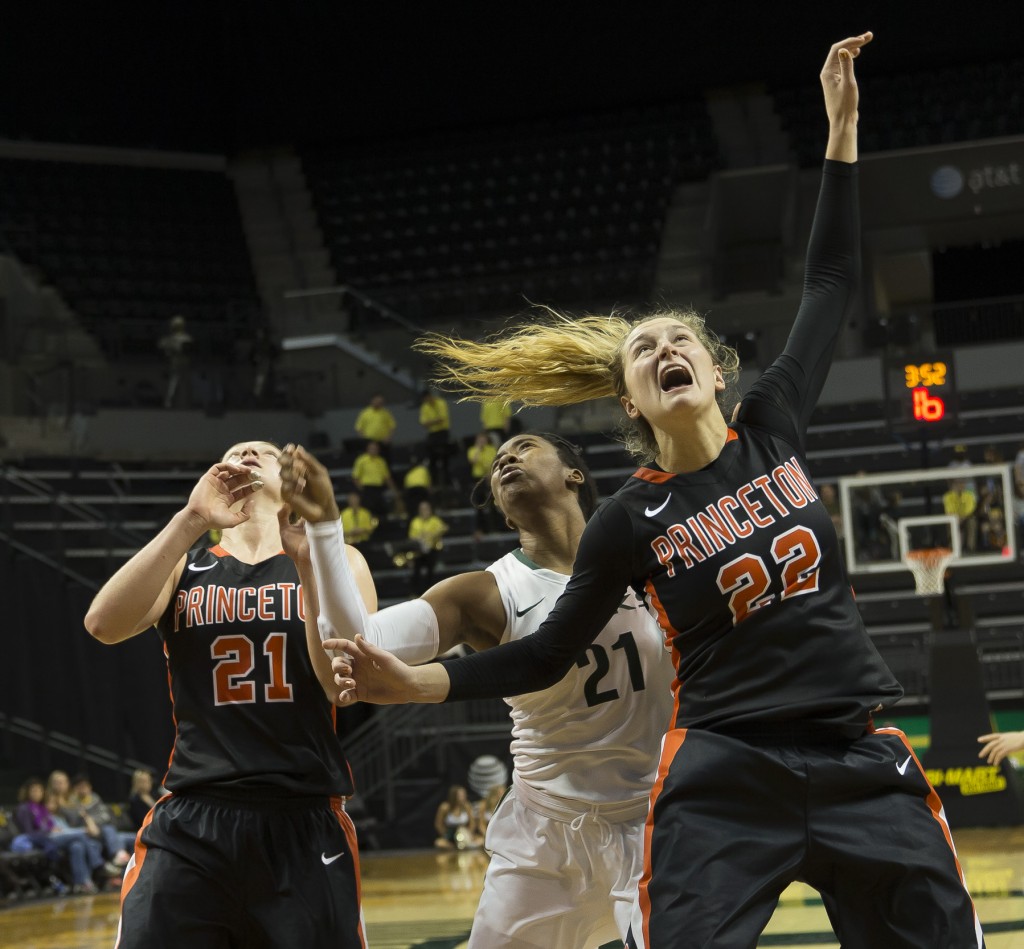 The coaches did a good job of getting the girls on the same page as they came out in the second half playing within themselves and the results showed it.  Oregon quickly caught up and overtook Princeton and eventually took a commanding lead.  Oregon made some key baskets down the stretch and the Tigers were not able to stay close to the Ducks.

Oregon should feel good about this victory.  They played a team that fought hard and had good shooters.  Hopefully, this bodes well for the next game. 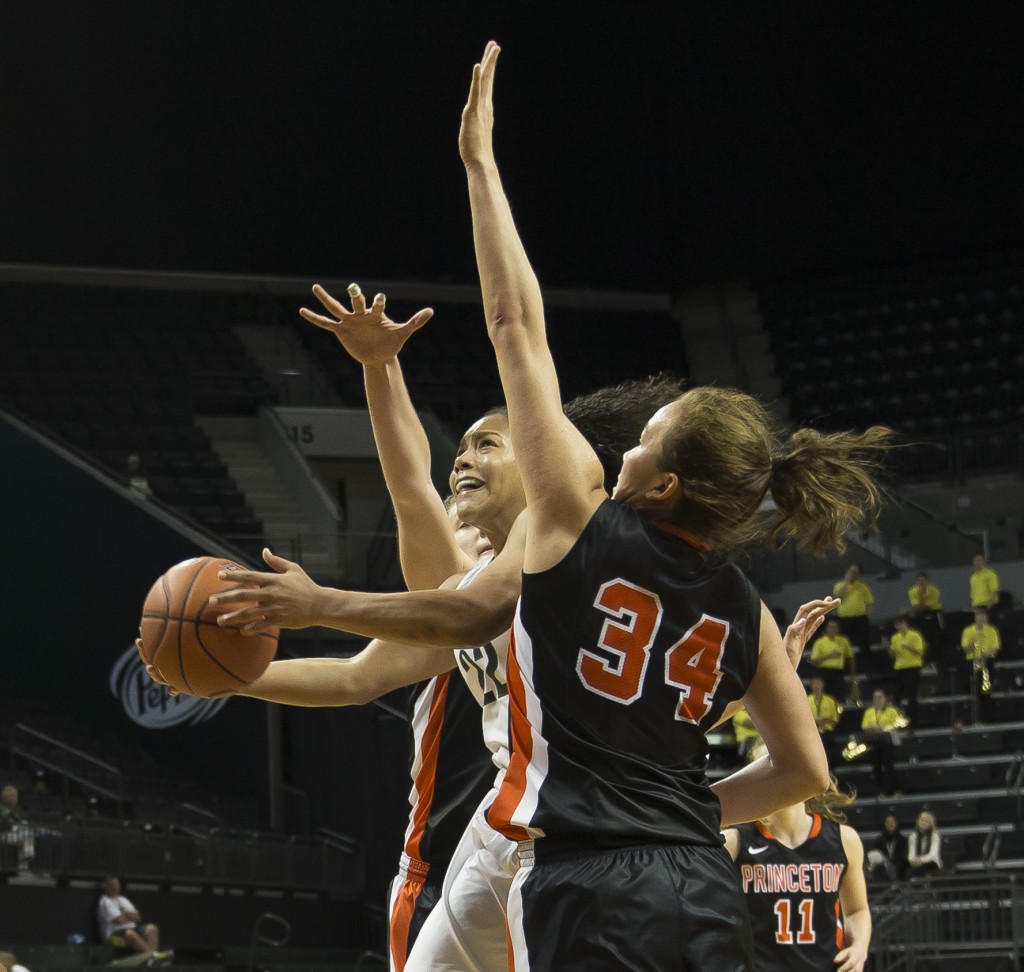 This was a fun game to shoot. Pepperdine looked like it would be a formidable opponent. Oregon always looks high energy and they definitely did tonight. The girls slowly built up a substantial lead through the first half and at one point led by 20 plus points. The Oregon shooters were on fire in the first half making numerous three point shots. Everyone was feeling pretty good at half time. In the second half of the game, the Oregon shooters went cold. Pepperdine started to play much better defense and caused the Oregon players to turn the ball over. That combined with hot shooting from in the paint and the three point range, Pepperdine slowly erased the Oregon lead. With .9 seconds left, Pepperdine was within one point. They fouled an Oregon player who successfully made the two free throws which provided the final score. Oregon survived a hard playing Pepperdine team. I look for Oregon to regain their shooting touch in the upcoming game.

The Oregon Ducks(9-1) defeated the Utah Utes(4-6) 44-21 at Autzen Stadium. Oregon quarterback Marcus Mariota got back to his Heisman winning level of play on Saturday afternoon, completing 19-26 passes for 288 yards and three touchdowns.

Oregon’s loss to Sacramento St. was made worse by an injury to Sophomore forward Jillian Alleyne. With Laura Stanulis and Lexi Peterson returning from serious knee injuries, the injury big continues to bite. Jordan Loera is already lost with a knee injury, the Ducks cannot afford more injuries. This was one of the most physical Womens basketball games I have seen in a long time. Sacramento St. came in to Matt Knight Arena with a plan to out hustle and out physical Oregon. They succeeded in nearly every aspect of the game. Oregon could not match their aggressiveness and quickness. Oregon made a run in the second half closing the gap to, 6 but that would be the closest they would get as they lost 97-85.

Oregon had their first loss this season to the Stanford Cardinals 26-20. All though they had a great comeback attempt in the second half of the fourth quarter, it fell short with Stanford recovering a second onside kick attempt and running the clock out. The Ducks looked flat and tentative in the first half and were victimized by some really bad calls on an Ifo Ekpre-Olomu interception and two pass interference calls in the endzone. Stanford stadium is a great venue with natural grass field, Superbowl like electricity and enthusiasm from the fans. Oregon had an army of loud and energetic fans in attendance.While the drive was long and lack of sleep made for a long couple of days, it was worth the experience. One of the things a photographer can check off of a bucket list.

Note: All photos are available for purchase