Mike Merrell’s Three-and-Out What an exciting era for college football! Globalization, which began with soccer-style place kickers, has taken the next step forward with rugby-style punters, and hurry-up spread offenses are producing basketball-esque scores. It seems a pity that the…

The quarterback battle going on in Eugene has certainly received its share of local and national press, and justifiably so. The Ducks are replacing the single greatest player in program history, who also happened to occupy the single most important…

The Oregon Ducks defense last season was very inconsistent, both dominating opponents and being dominated by opponents. The most obvious example is the juxtaposition between Oregon’s destruction of Jameis Winston and FSU and their own destruction at the hands of…

FishDuck.com sportswriter Austin Willhoft managed to catch up with linebacker Rodney Hardrick after Friday’s spring practice, coming away with the impression that this coming fall will be the defining season for Hardrick. After a disappointing defensive performance in the National Championship game...

Jordan Ingram reporting for FishDuck.com at the Hatfield-Dowlin Complex in Eugene, Ore. While the football forecast in Eugene seems a little cloudy at times, there is one position group that will give Duck fans a sunny outlook. The Oregon linebacker corps boasts the return of...

Football is a man’s game — those with the strength and mental fortitude to compete and win each down, survive; those who do not, will die. In the case of

It was March 2013 and new Philadelphia Eagles head coach Chip Kelly had a problem. The 3-4 defensive scheme he brought from Oregon needed a versatile left outside linebacker. In his search, Kelly found the man who would become the centerpiece of his defense: Connor Barwin. Meanwhile, in Eugene,... 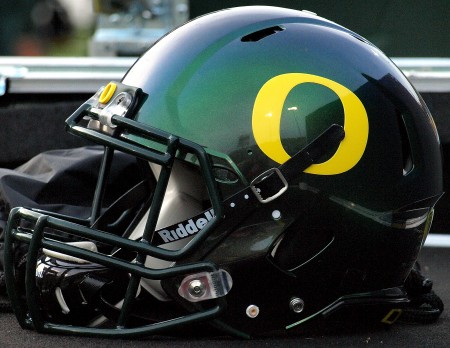 Oregon will be making its second national title appearance in four seasons with a 59-20 beat down of Florida State in the Rose Bowl Thursday night. The Ducks will take on Ohio State in Arlington, Texas. The Buckeyes upset No. 1 Alabama 42-35 in the other semifinal game in the Sugar Bowl.

But back to Pasadena. This was a game, really. For a half.

The Ducks led by just five points at halftime, 18-13, and the Seminoles had the momentum. But when Oregon came out for the third quarter, the Ducks turned on the jets and didn’t allow for another vaunted Florida State comeback.

Oregon outscored the Seminoles 27-7 in the next 15 minutes, taking a 45-20 lead into the fourth quarter, a quarter that turned out to be academic.

The 59 points were a Rose Bowl record, one of 14 records broken, and the most points the Seminoles have ever allowed. Quite stunning given the fact that this was the No. 3 team in the nation, winners of 29 straight and the defending national champions.

The Seminoles also had a Heisman Trophy winner in the backfield and while Jameis Winston had his moments, he didn’t have nearly enough of those moments that the Florida State faithful are use to.

Winston did have a moment in the third, but it wasn’t quite the moment he had hoped. Down 39-20, the Seminoles were driving towards the end of the third quarter when Winston went back to pass, scrambled, slipped and tried to throw. The ball went backwards, took one bounce into Tony Washington’s hands and 58 yards later, Oregon had a 45-20 lead and the game.

That was just one of four turnovers in that dreadful third quarter for the Seminoles. And Oregon took advantage of every single miscue.

Freshman Dalvin Cook, who has had a stellar season, fumbled the ball on FSU’s opening possession of the second half. It was more of Derrick Malone just taking the ball away rather than a fumble, but the result was the same.

Oregon just took 1:32 in five plays to go 69 yards for a Royce Freeman touchdown. Going up 25-13 was vastly different than going down 20-18. Although Florida State did score on its next possession, the Seminole defense was looking for answers.

The Ducks took just 1:24 to go 81 yards and scored on a Mariota pump fake in the flat to go long to Darren Carrington for 56 yards and the 32-20 lead. The touchdown marked the 40th straight game Mariota threw a touchdown pass.

Mariota quietly had a stellar game, if that’s possible. He was 26-of-36 for 338 yards and two touchdowns. He also had a rushing touchdown. Shockingly, Mariota threw an interception, just his third of the season, right before halftime.

Up 32-20, it was still very much a game. Florida State had been in this same position countless times and it had prevailed every single time. The Oregon defense just could not let up.

Even though Winston was gashing the Ducks with passes over the middle, it seemed like Oregon was waiting for the Seminoles to make a mistake. It was Cook again that coughed the ball up after a short pass over the middle. Reggie Daniels recovered, setting the offense up for another backbreaking touchdown.

Mariota found Charles Nelson for 13 yards and then Carrington for 30 and the score and the 39-20 lead.

Oregon and its fans could feel comfortable booking their tickets to Arlington after that.

Carrington has come on of late to become one of Mariota’s favorite targets. The freshman had seven catches for 156 yards and two touchdowns. This was coming off a Pac-12 title game where Carrington caught seven balls for 126 yards and a touchdown.

Although the game was well under control going into the fourth quarter, Oregon not only shut the coffin door on Florida State, they nailed it shut.

On a 4th-and-2 from the FSU 26, Mariota ran the option to the right, faked a pitch, went in between two Seminole defenders on his way to pay dirt.

If it wasn’t bad enough for the Seminoles, they still suffered a case of fumblitis when Jesus Wilson dropped the ball after a catch and Tyson Coleman recovered.

Thomas Tyner took advantage of a tired bunch to run 57 yards in four plays and one more touchdown. Having Tyner back in the fold is huge for the Oregon offense. He’s just one more weapon and will keep Freeman relatively fresh. Tyner led the Ducks with 13 carries for 124 yards and the score.

The second half was fun, but the first half was nerve-racking for Oregon.

The Ducks had trouble moving the ball at times, but they did get a drive going in the first quarter to get on the board. In their third possession, the Ducks finally figured the Seminole defense out.

Mariota marched his Ducks down 73 yards in just 2:11 where he found Charles Nelson on a third down and a first down play-action pass. The latter play was almost a score when Nelson did a Superman impression, flying through the air going for the pylon. He was short, but Freeman plunged in two plays later. In typical Oregon fashion, the Ducks went for two when Christian French caught the ball and bullied his way to the end zone and the 8-3 lead.

Oregon’s defense was stout in the red zone the entire day and when Winston’s lunge to the goal line was just short on a fourth down, the Seminoles should have figured then that they would be in for a long day.

Down on their own 1-yard line, Mariota orchestrated a memorable drive where the Ducks went 88 yards on a second-long 19 plays that ended with an Aiden Schneider field goal and the 11-3 lead.

Florida State’s Roberto Aguayo kicked his second field goal on the day to make it 11-6, but Oregon answered with a 10-play, 75-yard drive to make it 18-6 just 2:18 before halftime.

This was when the Seminoles put together their most impressive drive of the night, a six-play, 71-yard drive ending with Karlos Williams’10-yard touchdown run to make it 18-13.

The last 36 seconds of the half got weird as Mariota throw an interception and gave the Seminoles the ball on at midfield. Aguayo was in position to kick a 54-yard field goal, but it doinked on the left upright.

It was a sign to come as the entire second half was a doink for the Seminoles.

Having a Heisman-hopeful, such as quarterback Marcus Mariota, is always exciting for a team. However, the timeless saying “Defense wins Championships” has been proven correct time and time again. With that being said, the Duck defense — which is arguably the best it has been since the departure of Defensive Coordinator Nick Alliotti – is possibly what could finally land …

I am not a “professional,” per se, as I refuse to write the usual “blah-blah” that you’ll see from other media outlets, but then that is why this site began. I wanted more information, and to learn — and our readers have agreed. This Oregon Football Media day was like going down memory lane … in how similar it was to my …