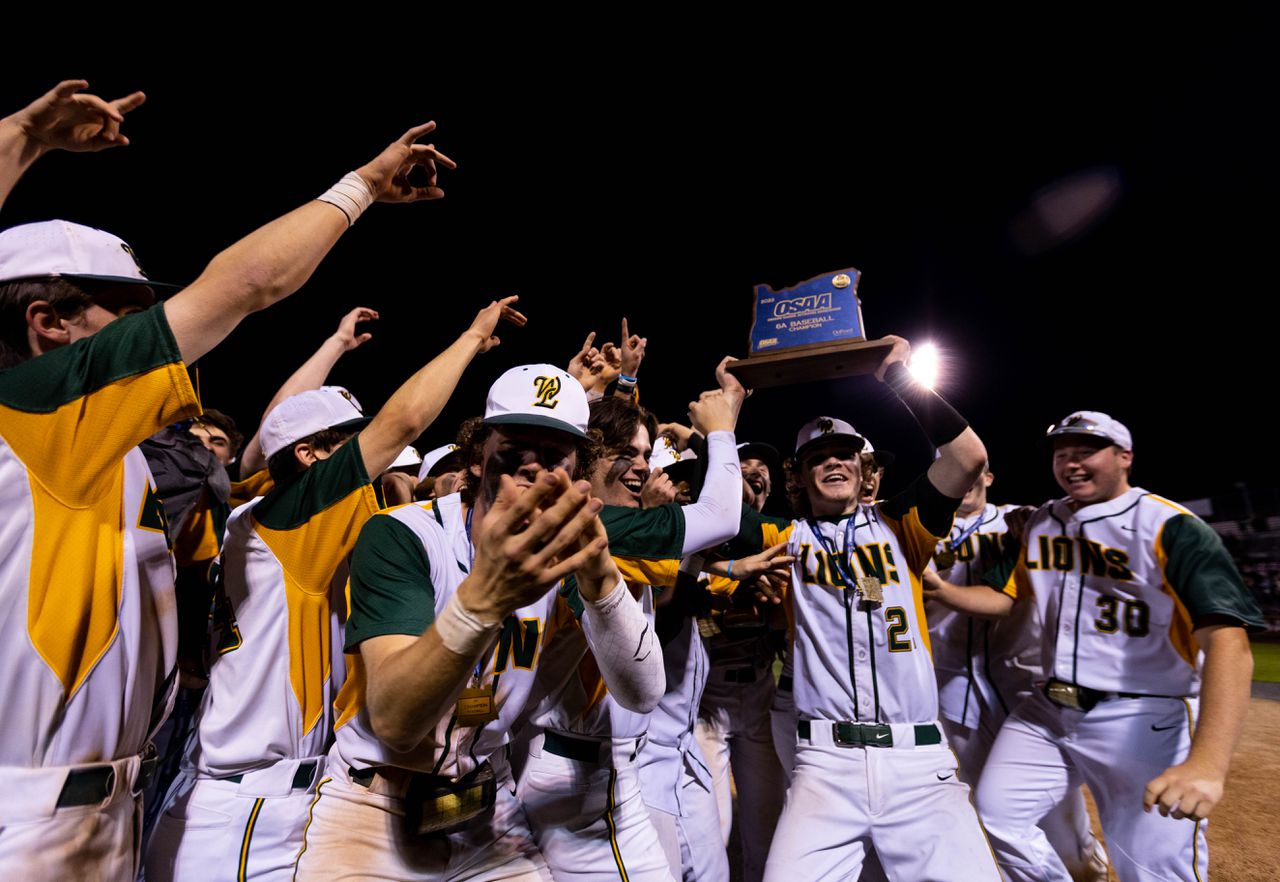 KEIZER — In 76 years of OSAA baseball, the big school state championship has never been so one-sided as it was on Tuesday.

West Linn came to Volcanoes Stadium in Keizer for the Class 6A title game against Canby, leaving with a 14-0 win in five innings.

“I’m just super happy, you know?” West Linn ace Drew Talavs said. “We knew this team was going to be special since the summer. It just feels good that we finally made it.”

The title is the first for Joe Monahan, who has been West Linn’s coach for nine season.

“I’m just so happy for these kids,” Monahan said. “We got it done. I’m so proud of these kids. They’re a joy to be around.”

The game also allowed West Linn to get a monkey off of its back. In 2015 and 2017, Monahan brought the Lions to the state championship game and left with silver medals. As these West Linn players didn’t know what it was like to lose in the title game, one of the biggest moments for the Lions this season came off the field.

After getting swept by Lakeridge in mid-May, Monahan threw West Linn’s players into the bus as they traveled down to Keizer and saw the stadium. He wanted them to know what it was like to be there at Volcanoes Stadium, and leave without the championship.

“We came here and sat in the dugout,” Monahan said. “I wanted them to understand that they’ve never experienced this loss and I didn’t want them to experience that this year.”

Since that excursion to Keizer in May, the Lions didn’t lose a single game.

The win is the first baseball state title for West Linn since 1982. That year, the Lions beat Newberg in six-innings, which is the last time a big school state title game was ended early because of a mercy rule.

The offensive flurry on Tuesday was a surprise, even to Monahan. The Lions have not been blowing out competition in the postseason. Their quarterfinal and semifinal games were both won by one point.

“Well, our bats haven’t been great,” Monahan relented. “We’ve had moments of greatness with the bats, but we haven’t really put it together. We’ve had a couple of guys get us through each game offensively. And we haven’t really had a whole bunch of them do it all at one time. We were due.”

Talavs said the Lions have been feeling good all postseason, and knew that they could be dangerous on Tuesday night.

“We just flipped a switch. We hit the ball hard and played great defense,” Talavs said.

West Linn didn’t waste any time getting on the scoreboard. With one out, Spencer Sullivan grounded one to shortstop, but the throw from Kellan Oakes missed the mark and two Lion runners scored on the error. Later in the inning, Maxwell Wright hit a two-RBI double. At the next at-bat, Jake Holmes sent a sacrifice groundout to score one more and make it a 5-0 lead.

The game was blown open with a lengthy two-out rally in the bottom of the third inning, starting with an RBI double by Holmes. Later in the inning, Barret Brundage hit a stand up triple two score two more, making it an 8-0 game.

In the bottom of the fourth inning, Jeremy Levasseur scored on an error. Maxwell Wright hit an RBI single to add another. Henry Popma came in to pinch hit, doubling to score three more. Then Jackson Curdy pinch hit and hit an RBI double to make it a 14-0 game.

Drew Talavs pitched all five innings for the Lions, allowing two hits, no walks and striking out 10 while keeping Canby from scoring any runs.

Canby’s Cinderella postseason run comes to an end at the state championship game. The Cougars came into the playoffs as the No. 14 seed, upsetting No. 3 South Medford, No. 6 Mountainside and No. 7 Clackamas in road games along the way. 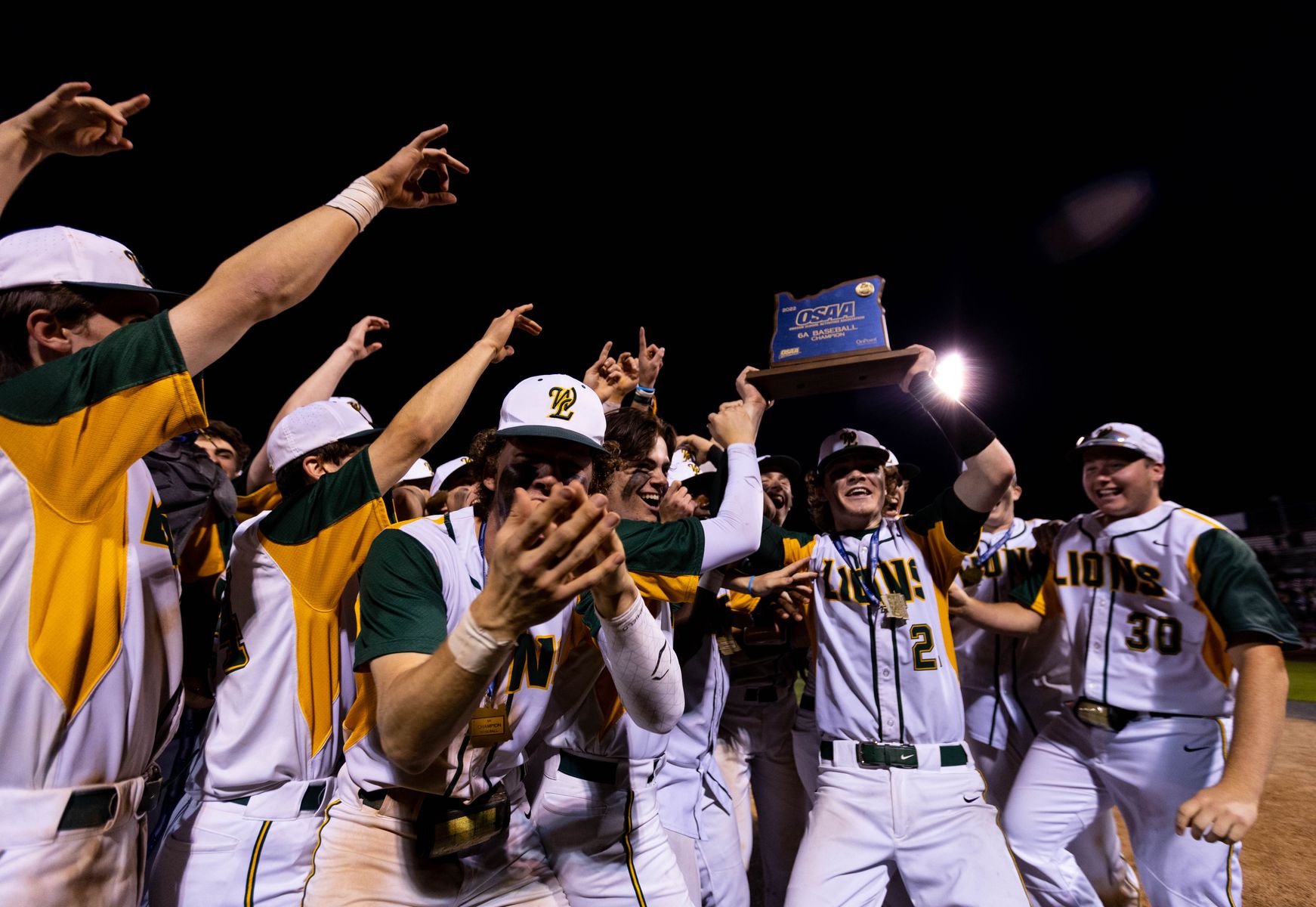