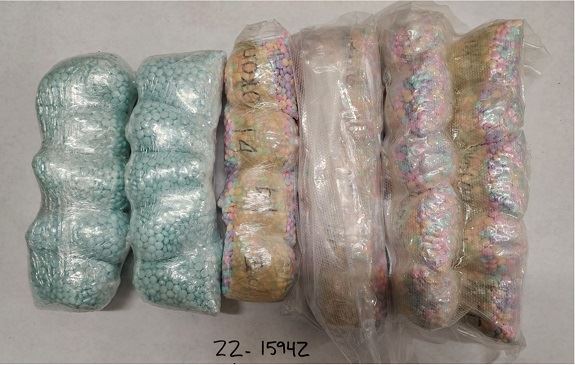 At around 10:49 p.m. on October 19, a Eugene Police officer was working impaired driver and traffic enforcement for his assigned shift and responded to the intersection of E. 11th Avenue and High Street for a welfare check on a driver slumped over the steering wheel at the stop light. The driver, Andre Lavell Johnson, age 42, of Portland, was found unconscious and police pinned the vehicle in before rousing him. When he woke up, Johnson attempted to start the vehicle and refused commands to stop. He was removed from the vehicle and during this officers spotted a firearm near his feet. Officers also saw bags containing pills, later determined to be fentanyl, matching the description of currently circulating counterfeit oxycodone pills containing fentanyl.

A search incident to arrest found Johnson had a large amount of cash, multiple phones. Street Crimes Unit drug detection K9 Jack alerted to the presence of controlled substances on the cash and the firearm, which was found to be stolen out of another jurisdiction. Johnson also had warrants for his arrest.

Johnson was lodged at Lane County Jail on his warrants as well as probable cause charges of DUII Felony, Driving While Suspended Felony, Felon in Possession of a Firearm, two counts of Unlawful Delivery of a Schedule 2 Controlled Substance and Eugene Police continued to investigate.

Over the next 28 hours officers and detectives conducted follow up search warrants on Johnson’s vehicles and residence where they seized approximately 18 pounds of suspected fentanyl in both powder and pill form, 12 firearms and over $47,000 in cash.  Of the firearms seized in this case 6 were confirmed to have been previously stolen.

This continues to be an active investigation and additional charges are pending. Case 22-15902