WALLA WALLA — As hundreds walked Saturday, Sept. 10, along Walla Walla’s Main Street to inspect the classic cars assembled there, around 75 people marched across the city as part of a protest organized by Rise Up 4 Abortion Rights.

Many were clad in green bandanas, first adopted decades ago by Argentinian abortion rights activists that became the symbol of a successful movement for expanded abortion access throughout Latin America. 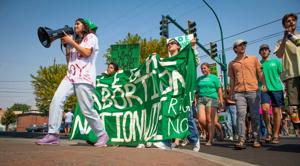