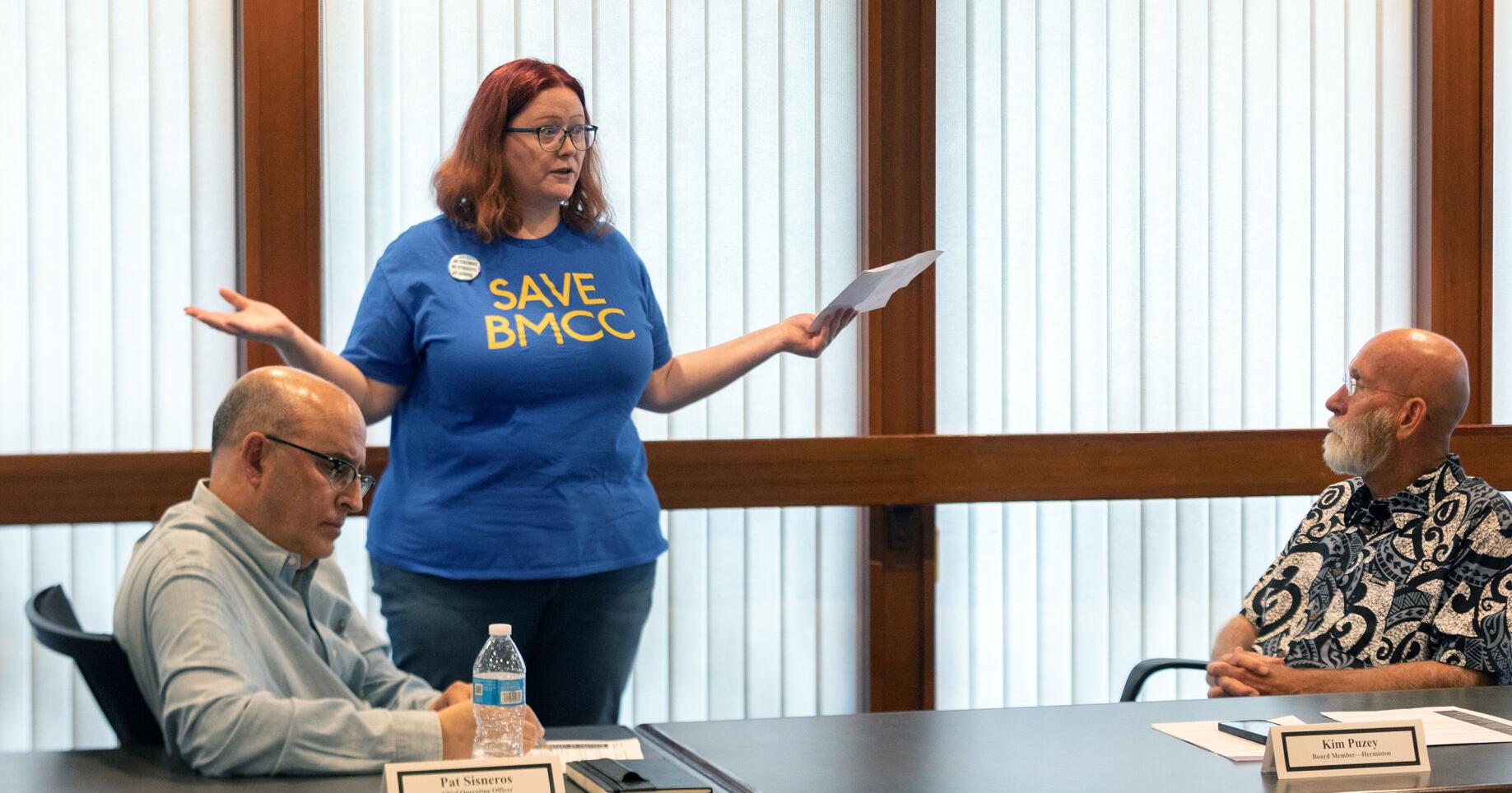 The board voted on the plan Monday night, June 6, in a special meeting.

The board also passed adjustments to its current budget and changes to the proposed 2022-23 budget, then adopted the new budget. Board member Kim Puzey of Hermiston voted against adoption. All other agenda items passed unanimously.

Six board members attended in person and Bill Markgraf of Baker City remotely.

The board had met in executive session at 5 p.m. to conduct deliberations with the college’s labor negotiations team.

BMCC administration met with the faculty union team for a final time June 3 to negotiate layoffs in the new budget.

“The meeting was short and not unexpected,” BMCC President Mark Browning said. “The union did not bring any new ideas. They just wanted to know who is on the layoff list.”

But it’s not the role of the union to notify employees, he said, but rather the college’s because it’s the employer.

“We need to move forward,” Browning concluded, “and address student needs. It’s time to wrap this up.”

McKeon regarded the meeting as an implementation session.

“We came to the table for a polite conversation on options to save jobs,” she said. “The administration didn’t act on them back when there was time.”

Faculty at risk of losing their jobs would have liked a timeline of what to expect, biology instructor McKeon added.

“The administration gave us reason after reason for not taking our suggestions to save money elsewhere, without providing any ideas themselves,” she continued. “We tried to maintain a relationship. We could have had three days of turnaround, but the administration said there were lots of moving parts.”

The union’s collective bargaining agreement with the college requires meetings to discuss alternatives, but also for implementation, McKeon explained. No implementation meeting had been held, so the June 3 session satisfied that contract requirement.

With the board’s approval of the budget, she said the faculty association could file grievances.

“It’s frustrating to do good faith bargaining when we don’t have the full picture,” she said. “For whatever reason, the administration couldn’t or wouldn’t share their plans with us.”

Most of the 11 speakers during the 30 minute public comment period June 6 were full or part time Blue Mountain faculty members.

McKeon was the final speaker. She noted other schools dedicate 40% of their budgets to full-time instruction, but BMCC administration thinks 12% is sufficient.

“Our greatest asset is high-quality instructors who have honed their craft here,” she said, “which makes them uniquely suited to serve our students’ needs.”

Board Chair Don Rice of Hermiston recognized Browning after the public comment period.

“This has been a journey and process no one has enjoyed,” Browning said. “Reducing faculty is not something anyone wanted to do. But we have to face economic reality. We have significantly lower enrollment, and a fiduciary responsibility to craft a budget that reflects that fact.”

Browning explained why increased expenses in some line items were justified, and why other apparent hikes were just warranted accounting changes. For instance, even before $5 gas, the administration knew travel expenses would increase, as athletic teams would travel more than during the pandemic years.

“We started with a $2 million hole,” he added, “of which $1.3 million was faculty. It’s difficult to overcome. We need to offer students what they need. The world is changing. We need to change with it.”

Browning stated the Amazon gift in lieu of Morrow County property taxes helped to reduce proposed layoffs from 10 to five.

“This proposed budget was not drafted in isolation,” he said. “The budget committee met three times, rather than the usual once, and with citizen and faculty involvement. It was forthright fact-seeking. I believe that our students are our greatest resource.”

Puzey noted actual cuts don’t have to go through until 120 days after notifications. He suggested selling or leasing buildings, seeking scholarships from business partners, county governments and the ports of Umatilla and Morrow. He also urged faculty members to leverage the channels to the community that they’ve developed to help increase enrollment.

Kent Madison of Echo stressed the importance of outreach to high school juniors and seniors, who might not even know that their parents taxes support the college.

“BMCC is not for profit,” he said. “The layoffs aren’t to provide dividends to shareholders. We just don’t have the money. Enrollment has dropped 65% in 10 years.”

Vice Chair Jane Hill of Pendleton also held out hope that more money could be found and enrollment increased before classes start in September.

“Every faculty member is important,” she said. “I hope we can all come to the same table.”

Hill noted that adjustments up to 10% can be made to an adopted budget. She asked Browning if the faculty cuts would fit under that share. He said they would.

“At least having the names will help with our grievance cases,” McKeon said in the hall outside the conference room after the meeting.

She lamented the revised fall schedule and need to notify students who signed up for classes, which now may have to be cancelled.

“Now there is more pressure on teachers,” she concluded, “if we’re going to be recruiters as well, and fill in until the marketer in the budget is hired.” 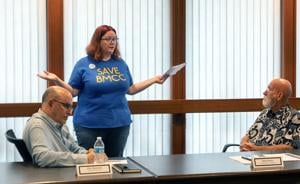