PENDLETON — The Blue Mountain Community College Faculty Association is individually grieving the five full-time teachers the college laid off in the June 6 retrenchment, according to its president, Sascha McKeon, in an email. She said five part-time positions also were lost in the new budget.

“We filed the grievances because we believe the college violated the provision in our contract related to layoffs,” she wrote. “The college president and the board chair signed the collective bargaining agreement. So they should see that our contract is followed just like any contract they have with any entity. It’s a legally binding agreement.”

The college administration has argued the actions are justified due to decreasing enrollment and to help close a $2 million budget gap. But McKeon said that while the college laid off faculty it also was posting new positions with a total expense of $250,000. She said these were a director of Student Success and Services and a director of Recruitment and Retention.

McKeon contented the board needs to address these issues if there is to be accountability.

“There are not two new positions. No new (full-time equivalents),” he said. “One replacement was our registrar. It’s a reallocation of duties, split with some other offices. We’re taking a better approach to serve our students, so we can go out to recruit more. Why hire more faculty without more students.”

The college has hired a labor law attorney to handle the grievance process.

“BMCC has an attorney but I felt, and the board agreed, that we needed representation by a specialist in that field,” Browning said. “In a legal matter, that’s the best way to do business. We could save the taxpayers money if the faculty union pulled back its grievances.”

Cost of living increases are back on the table, as a result of the grievances.

“During the 17-day negotiations ‘cease fire’ in May, the union offered to take out cost of living increases, but now they’re demanding them again,” Browning said. “I know there’s inflation, but they’re already getting an average step up of 4.5%.”

No funding is specifically allocated within the 2022-23 fiscal year budget for cost of living increases for faculty or classified staff, Browning noted.

“Where will the money come from?” he asked. “Students’ tuition? The taxpayers? They’re suffering from high prices, too.” 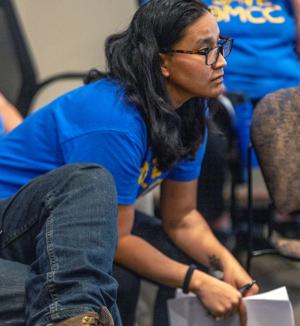