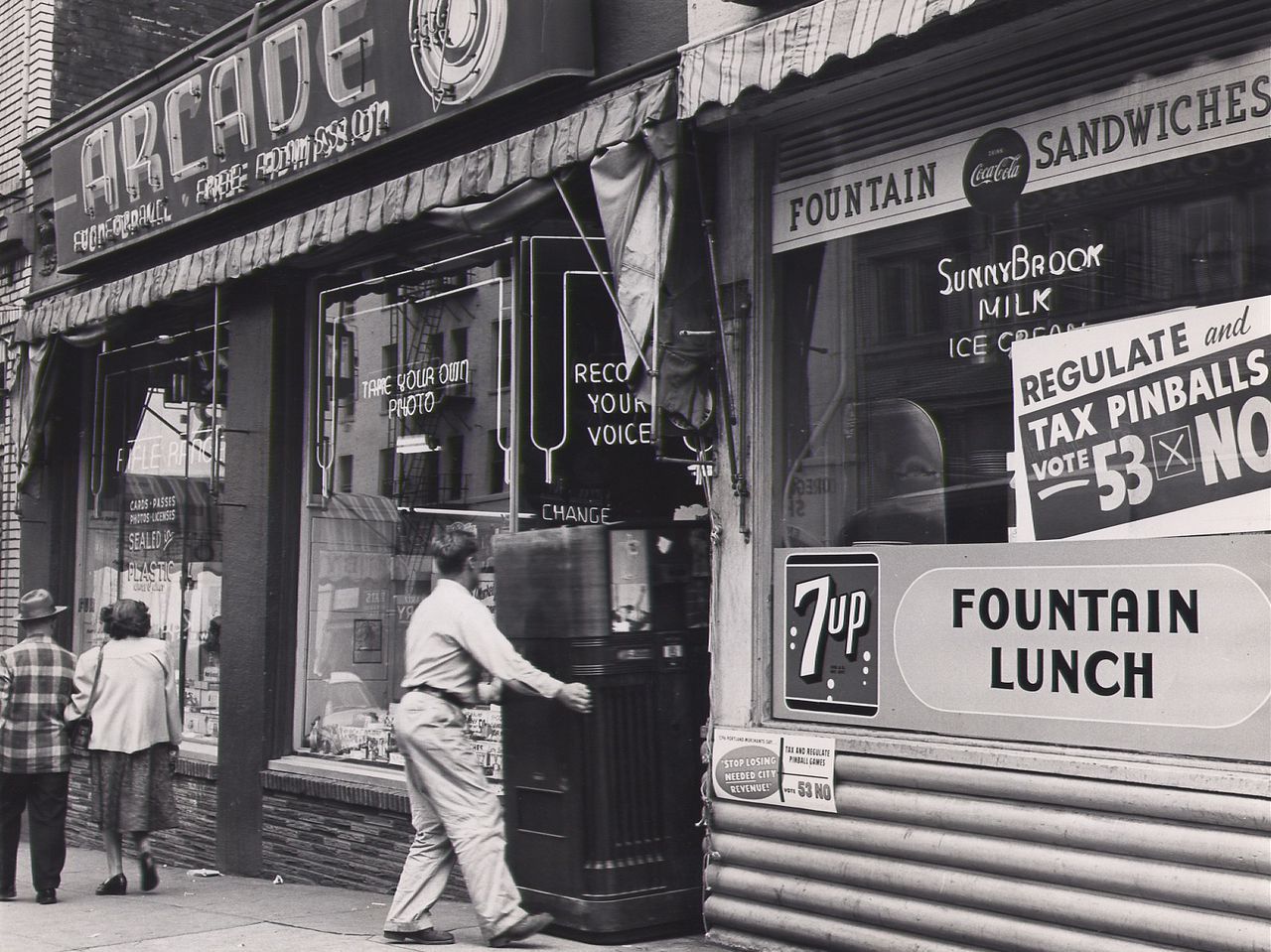 Before the war, Portlanders strolled along Southwest Broadway in the evenings. Dressed to the nines, they’d pop in here for a drink, stop off there for a meal, then move on to a show.

In the years that followed the defeat of fascism, the downtown street started to skew younger, with teens blasting the devil’s music as they inched tail-finned cars down to Main Street, then back on Sixth Avenue so they could start over again.

The chief boulevard cutting through Portland’s business district always has told the tale of the city’s mood and health.

“It is not New York’s Great White Way, or even San Francisco’s street of girlie bars and jazz clubs, but it is what Portland has in the way of a Broadway,” local writer Rick Rubin pointed out in 1966.

Maybe it was the arrival of television that changed the grand street from an adult playground to one for adolescents. Certainly the packing of the average teenager’s wallet – the postwar affluence being so strong that it put many kids behind the wheel of their own vehicles – helped bring about the shift.

In the 1950s, the grown-ups held on for a while as best they could, cramming into theaters featuring “exotic dancers” like Tempest Storm. The kids on the scene tended to be troublemakers, hanging out at Jolly Joan’s, posing like Marlon Brando in “The Wild One.”

City leaders who enjoyed the gambling and girls provided by Broadway’s grizzled gangsters worried loudly about a teenaged “Broadway Gang.” The teens didn’t appreciate it.

“Let’s get one thing straight,” 18-year-old William Dean Morris, pinched for a string of burglaries, told a reporter in 1952. “So far as I know there’s no such thing as an organized Broadway gang. It’s just newspaper talk.”

He continued, in between sips of black coffee at the county jail:

“It’s natural for young guys to flock to Broadway, because that’s where the shows and eateries are. But I don’t know of a Broadway gang in existence.”

“Broadway is where many of the youth drinking and ‘reefer’ parties originate,” The Oregon Journal insisted, quoting one teen as saying: “Curfews are for sissies.”

The police presence increased with the news coverage, leading to a 27-year-old named Joseph Garza becoming a “sidewalk lawyer” for teens facing off with officers. Garza, as it happened, was awaiting trial on a charge of contributing to the delinquency of minors.

By the end of the ‘50s, Portland’s movers and shakers were brainstorming ways to revive Broadway for the swank set. They zeroed in on one problem: its surrounding streets, as the city pointed out, had been “laid out for mass transportation in the streetcar’s heyday before autos took over the landscape.”

The politicians and business captains didn’t come up with a solution to the congestion issue, but the following decade proved to be a new high point anyway. The Hilton Hotel, backing onto Broadway, opened in 1963, the new tallest building in the city. Standard Insurance Co. president Garnett Cannon said the fancy high-rise hotel put Portland “on the map as a convention city.”

The city’s boosters once again started calling brightly lit Broadway their “great white way,” and they could sell it.

On any summer night, young women wearing short skirts and boys sporting Beatles cuts sauntered down the street. The grown-ups were around too, window-shopping at Ungar’s, Bergs and Meier & Frank.

Broadway was for everyone, and everyone was out walking, “as though it were a natural thing to do, like Seaside on the Fourth of July,” Rubin wrote: “sweet-faced kids and hipsters in dark shades, properly dressed couples and mysterious girls with tight pants and inward turning eyes, chubby chicklets and young kids with skin trouble, and blond-haired beauties and high-school athletes and tired old men.”

Morrow’s Nut House filled up every night, even though it didn’t offer all the sweets available at its Lloyd Center store.

Just off Broadway, teens piled into the underage nightspot The Headless Horseman, where a pleasant cop named Jack stood outside the door.

Movie fans queued at the Paramount and the Fox and the Broadway.

But this renewed heyday didn’t last long. The power of the internal-combustion engine could not be denied.

Year by year, walking increasingly became a novelty. So much so that the city decided to shut off most of the streetlights after midnight, even on Saturdays, “leaving just two at each intersection, counting on the omnipresent cars for light and action and background sounds on Broadway.”

If you wanted to be part of Broadway’s nighttime world now, you needed a vehicle – and you had to be a teenager.

“[M]ostly there were cars, solid from stoplight to stoplight, pipes rapping, rubber burning, motors roaring,” The Oregonian wrote. “They were cruising Broadway in search of a dream, but they were not meeting her, and what remained was screech and ROAR and purr and screech, an inadequate expression of frustration, but the only one available.”

By the 1970s, downtown Portland was unmistakably in decline, much more so than the subtle turn toward grittiness 20 years before. Suburban flight really took hold; workers streamed out of downtown at 5 p.m., abandoning the restaurants, bars and shops. Rhodes department store, formerly Olds Wortman & King, suddenly closed.

“It is a sad thing when 240,000 square feet of retailing goes out of downtown,” former Meier & Frank CEO Jack L. Meier said, referring to Rhodes’ demise.

City leaders flailed about in search of answers.

The city launched construction of a tree-lined “transit mall” on Fifth and Sixth avenues, parallel to Broadway. Developers began to reimagine abandoned and underused property.

The effort and investment ultimately worked.

Broadway thrived throughout the early years of the 21st century, once again a prime stretch for shopping, eating and seeing a show.

Of course, the thoroughfare has been here before, staring into darkness. This time, at least, the streetlights are staying on all night.