This week the Lane County Sheriff’s Office and Mohawk Valley Rural Fire Department will be hosting the Every 15 Minutes program at Mohawk High School.

challenges teens to think before drinking and operating any type of motor vehicle, riding in one after the operator has been drinking, or engaging in activities that cause them to become distracted such as cell phone usage. It also focuses on the impacts those decisions have on family, friends, and the people you leave behind when someone is killed as a result of an alcohol or distracted driving related crash.

Scheduled activities include student education and awareness, a mock crash scene, and school-wide assembly including a guest speaker.

Videographer Michael Sherman of @SpringFedMedia created the linked video during the 2019 Every 15 Minutes program hosted at Elmira High School.

Just prior to 9:00pm last night, deputies responded with fire personnel to the report of a house fire in the 36000blk of Stacey-Gateway Rd. in Pleasant Hill.  Much of the house had burned before the fire could be contained.

A single deceased person was located inside.  Although not officially identified at this point, authorities believe that the deceased is likely the 86 year old male resident.

The cause of the fire remains under investigation.  Additional details will be released when available.

The Lane County Sheriff’s Office is advising the public of a water obstruction on the McKenzie River approximately 2.2 miles downstream from Paradise Campground.  This is near milepost 52 on the McKenzie Hwy.

Due to a tree down across the river, the channel is completely blocked and  not safely navigable.

For the most current information on water obstructions and safety tips, please review the information provided by the Oregon State Marine Board at www.oregon.gov/osmb

On 09/08/22 the Lane County Sheriff’s Office received a burglary report at a residence in the Veneta area. During the burglary, a suspect entered the residence when no one was home and stole numerous items of personal property.  Deputies contracted by the City of Veneta to provide law enforcement services were assigned to investigate.

Deputies learned that a suspect used one of the victim’s stolen credit cards to make multiple purchases following the burglary.  They identified the suspect and tracked her to a residence in the 1400blk of Bramblewood Ln. in Eugene.

Deputies applied for and were granted a search warrant for the suspect’s residence which was executed yesterday afternoon at about 3:45pm.  Deputies recovered several items from the burglary, including the victim’s identification, passport, checkbook, and some jewelry.  Deputies located additional evidence from at least two other burglaries.  The suspect was not at the residence and remains outstanding.

Deputies are continuing to investigate this case.

A 72 year old hunter was found by Sheriff Search and Rescue crews Monday afternoon after spending nearly two and a half days lost in the wilderness.

The 72 year old Eugene man left on foot to go hunting in the area south of Hill’s Creek Reservoir at about 8:00am on Saturday. He did not bring food, water, lighting or other survival supplies with him.  He was expected to return to camp before dark, however he never arrived. Authorities were not notified that he was missing until about 10:00am on Sunday.

Lane County Sheriff Search and Rescue Crews quickly mobilized and began searching the area.  Given the expansive wilderness area and its close proximity to two other counties, numerous additional resources were summoned to assist in the search.

Search crews located the missing hunter on Monday afternoon shortly after 12:00pm.  He was alive, but in immediate need of medical attention.  A helicopter, dispatched by the Oregon Army National Guard responded and transported the man to a hospital in the Eugene/Springfield area.

The Lane County Sheriff’s Office would like to remind you to be prepared whenever you will be recreating outdoors.  ALWAYS take proper supplies including but not limited to: water, food, proper clothing, lighting, shelter, navigation equipment, and the ability to provide yourself with warmth.  Formulate a travel plan highlighting locations and expected departure and arrival times.  Be sure to share this plan with people that are familiar with the area.

On September 30, 2022 at approximately 23:11pm the Lane County Sheriff’s Office responded to the report of a single vehicle crash on Parkway Road near Valley Road in Pleasant Hill.  A white Chevrolet S10 was traveling northbound when it left the roadway for an unknown reason and rolled.

The driver of the involved vehicle, a 41 year old male, did not survive the crash and was pronounced deceased on scene.

36 year old David Roy Keefaver of Junction City has been identified as the victim in this case. While the exact series of events leading up to Keefaver’s death are still not entirely clear, investigators have not uncovered any evidence to indicate that his death was the result of a criminal act.  Investigators do not believe there is any ongoing threat to the public.

This morning at approximately 4:32am, the Lane County Sheriff’s Office received a call of suspicious circumstances at a residence in the 30300blk of Lassen Ln. north of Eugene. An area resident called 911 to report that an adult male was throwing himself against the caller’s door.  As deputies responded the caller advised that the male had laid down on the porch and lost consciousness.

Deputies arrived on scene to find the male to be injured and not breathing.  The deputies attempted to perform life-saving measures including CPR.  Medics additionally responded to assist but the male did not survive.  His identity is being withheld at this time.  He is believed to be a resident of another location on Lassen Ln.

Detectives are actively working to determine the circumstances surrounding the male’s death.  His death is being investigated as suspicious at this time.

On September 24, 2022 at approximately 1:27pm, the Lane County Sheriff’s Office received the report of a serious motor vehicle crash on Camp Creek Rd. near milepost 2.  Milepost 2 is in the general area of the Easy Ln. intersection.

Deputies responded and learned that a black Toyota Tacoma driven by 26 year old Austin McKee of Springfield had been driving westbound on Camp Creek Rd. when it crossed over into the eastbound lane for an unknown reason and struck an eastbound Chevrolet Silverado pickup head-on. McKee was transported by paramedics to an area hospital in critical condition.

The driver of the Silverado, 70 year old Larry Sidwell of Springfield, was transported to an area hospital with non-life-threatening injuries.

The reason that McKee crossed in the oncoming lane remains under investigation.  Evidence of drug use was located at the scene.

McKee died at the hospital over the weekend as a result of his injuries. 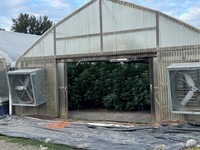 Authorities executed the warrant on 09/15/22 and seized approximately 8,000 illegal marijuana plants, 4,822 pounds of dried marijuana, processed concentrated marijuana products known as ‘BHO’ or ‘Butane Honey Oil’, nearly $50,000 in cash and $32,000 in silver.  Authorities also seized a luxury vehicle that was believed to have been purchased using funds from the illegal operation.

This illegal operation was located directly adjacent to the Willamette River. Included in the operation were numerous unpermitted structures, a swimming pool, and two separate unpermitted wells, all within the flood plain,  which can have negative impacts on the environment when water levels rise.

The extent of the environmental impact from this illegal operation remains under investigation by Lane County Code Compliance officials and the Oregon State Watermaster’s Office, who were present during the execution of the search warrant.

This investigation was conducted by personnel funded through a grant from the Oregon Criminal Justice Commission.  In 2018 and again in 2022, the Oregon State Legislature made funds available to local law enforcement agencies for the specific purpose of investigating these large-scale illegal marijuana manufacturing operations, including the health and safety impacts on the community.  These include unsafe, unregulated working conditions, water stolen from the community, trash dumped on public lands, and dangerous chemicals used improperly. Butane Hash Oil (BHO) labs use volatile chemicals that create a significant explosion and fire hazard to anyone in the vicinity. Dangerous wiring and overloaded electrical systems also pose a significant fire risk..

Without this funding, the Lane County Sheriff’s Office would not have the resources needed to investigate and stop these operations, including the resulting serious impact on our environment and communities.