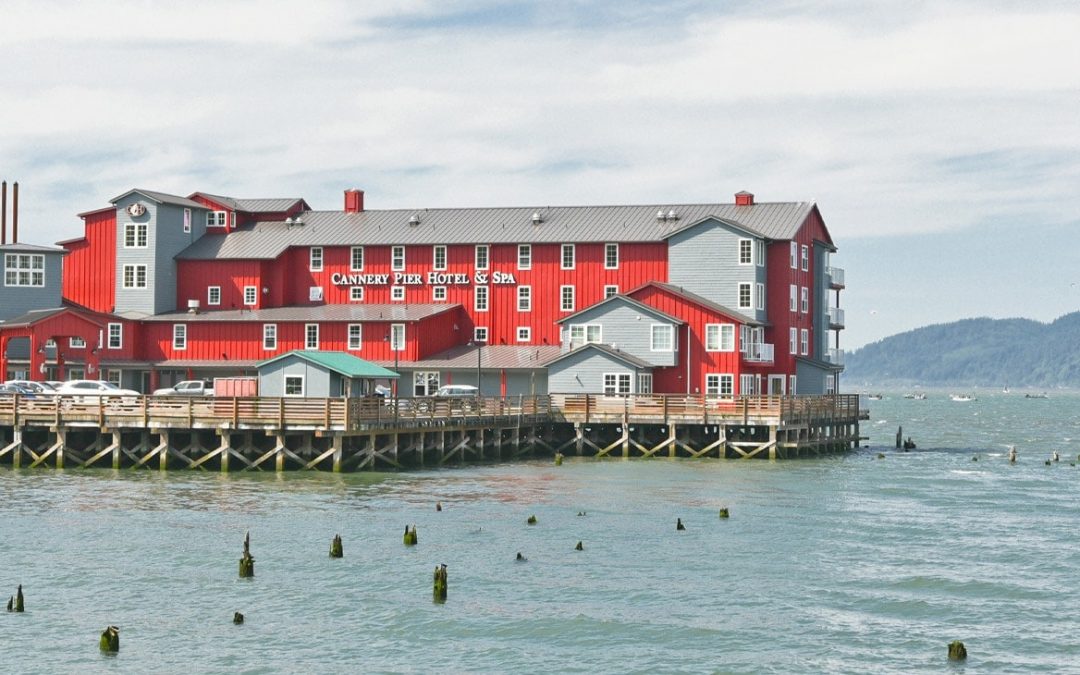 Stay in luxury, perched directly over the Columbia River.

With its grand Victorian houses perched on cascading hillsides overlooking the Columbia River, Astoria welcomes you to the oldest city in Oregon. But have you ever wondered what made this port town flourish in the wild Pacific Northwest? Find out more by exploring Uniontown, Astoria’s historic cannery neighborhood, where you can still experience the spirit of yesteryear.

Uniontown, which stretches about 10 blocks east from the Astoria-Megler Bridge on the southeastern side of town, is a neighborhood once central to the fishing fleets and residences of Finnish, Chinese and other immigrants who worked on the boats and in the canneries. With its restaurants and shops right on the Columbia River, and many historic houses perched on the steep hills above, you’ll immediately get a sense of how important the water was to their way of life.

Nowadays, you’ll be able to stay in grander fashion. The best place to base your Uniontown exploration is at Cannery Pier Hotel & Spa. The modern hotel was built on historic pier pilings that go 600 feet into the Columbia River. It was once home to the neighborhood’s namesake, the Union Fishermen’s Cooperative Packing Company. During daily happy hour or breakfast in the open lobby area, imagine you’re seated in the 1897 cannery that once occupied the site.

With guestrooms and public spaces renovated in 2022, every sparkling new room in this luxury boutique hotel has an unparalleled view of the river, and you’ll love the gas fireplaces and deep clawfoot or jetted bathtubs. Newly updated amenities include spa-like rain shower systems and 55″ flat-screen TVs, as well as reclaimed wood accents and soft bamboo-blend sheets. Even the pour-over coffee service features local touches, including made custom blends of coffee or tea. And stay tuned: later in 2022 the hotel will be adding a full bar with craft cocktails and small plates to enjoy as you watch ships glide by.

Now guests can also explore the hotel’s new Hall of History — photographs and ephemera with interpretive placards that tell the story of Astoria — in one wing you won’t want to miss. Created in partnership with the Clatsop County Historical Society in downtown Astoria, the exhibit shares the glory and challenges of salmon fishing, the immigrant experience, and constructing the Astoria-Megler bridge to Washington. It also features a new exhibit on historic fires that destroyed so much of Astoria.

Hotel guest can opt to take a complimentary chauffeured ride downtown in a rotating selection of vintage cars and also have access to complimentary bike rentals for pedaling along the river.

Before going any farther, you’ll really want to explore the neighborhood. A cute set of historic buildings under the Astoria-Megler bridge, just a quick walk from the hotel, now house shops and eateries. Visitors with a green thumb will want to make a stop at Variegata Exotic Plants to peruse the unique houseplants, and anyone who likes great coffee will want to buy beans and an afternoon pick-me-up at Columbia River Coffee Roaster, a wholesale coffee roaster and coffeehouse.

Locals love the patty melts and fish ’n’ chips at the oldest tavern in town, Astoria’s Portway, which began service in 1925 with a legendary past that some say involved kidnapping sailors and shipping them off into servitude. Don’t worry, you’ll be safe, and you’ll love the authentic feel of this lively gathering spot. Also historic, the nearby Workers Tavern has prime rib dinners on Friday and Saturday nights and a fire pit out back.

For more upscale fare and a robust Northwest wine list that’s just down the pier from the hotel, Bridgewater Bistro offers excellent riverfront views and Pacific Northwest casual dishes for lunch and dinner in a beautifully renovated warehouse-style building that once was associated with the cannery.

Every trip to Uniontown must include a view of the seafoam-green Astoria-Megler bridge from directly underneath it. This point of pride, the longest continuous truss bridge in North America, was opened in 1966. Adjacent to the bridge, shop for fishing boots or a flannel shirt at M&N Workwear in the historic white and blue Suomi Hall, a building that also has housed Astoria’s Lodge No. 2, informally known as the The Finnish Brotherhood, for over 100 years. In the late 1800, the Finnish immigrants who settled in Uniontown flocked to Astoria to escape famine and economic instability, and the organization aims to preserve the town’s Finnish roots. Plaques nearby explain its historic significance.

You can pay your respects to the maritime community at the nearby pocket park that houses the Maritime Memorial, a wall engraved with the names of those who died at sea and others with ties to the fishing industry.

Trolleys, Bikes and Strolls Along the Columbia

Whether on two wheels or two feet, the Astoria Riverwalk is one of the finest experiences in town. Beginning in Uniontown, you can take the walk for miles eastward along the Columbia River, appreciating the waterfront and taking time to shop downtown.

Another fun and unique way to go car-free from Uniontown is to take a ride on the vintage restored wooden Astoria Riverfront Trolley, which stops alongside the Riverwalk near the Maritime Memorial. It provides hop-on/hop-off service for a nominal fee on weekend afternoons from late March through early September, with interruptions in service on rainy days and in spring when necessary. Stops include the Columbia River Maritime Museum, a great place to take in even more history of the area. Or just sit a spell and watch the water from the Astoria Nordic Heritage Park, a park that honors the Scandinavian history of the town and is due to be completed in June 2022. You’ll enjoy it even more with a cone filled with homemade ice cream from Frite & Scoop.

Want to get out on the water? Book a salmon-fishing charter when the fish are in season in July and August, or a tour of the historic Astoria working waterfront on a fully restored and repurposed tugboat with Arrow Tugboat & Tour Company. The company guides groups of up to six people, and you can learn about the canneries and mills that once lined the river, all aboard a retired pilot boat that saw 50 years of service.

With all these fun things to see and do in Uniontown, you’ll soon discover why it’s been a neighborhood favorite in Astoria for well over a hundred years.

Emily Gillespie is a travel writer whose work has appeared in the Washington Post, CNN Travel and Afar magazine. She’s lived in three of Oregon’s seven regions, currently calling Portland home. She and her husband look for every opportunity to hike to a view, bike through wine country and eat their way through a new city.