How To Roast And Freeze Beets (Picture Tutorial)

Yes, you CAN freeze beets – and after thawing these roasted beets taste just like you cooked them fresh! They are perfect for salads, sides, and other recipes. Freezing beets is a great storage solution for when you have a lot to take care of at once.

For some reason beets seem to be a pretty divisive vegetable- you either like them or you think they taste like “dirt.”

Personally, I don’t get it. I mean, beets are so sweet you can buy beet sugar.*

*Note: I know that sugar beets are white and different from what we eat. What I mean is that there is enough natural sugar in beets (similar to corn, too) that scientists could create beet varieties that produce more.

But I’m the lone beet-liker (beet-liker? Well, you know what I mean…) in my family. The kids won’t touch them and Brian merely puts up with them.

So I don’t serve them very often and I don’t grow a ton of them in our garden, just a couple of rows for me.

But you know what happens with even a few rows, right?

Most of the beets are all ready to be harvested at once. I have problem of too many beets for just me but then none for the future.

Can beets be frozen successfully?

Pickling seems to be the most popular way to preserve beets, but my few small rows never made enough to pickle, so I decided to try freezing some that I had oven roasted–even though I had never heard or read of it being done.

(Seems like I’m a rebel like that – see my non-blanched frozen green beans, corn freezing experiments, and best ways to freeze basil.)

I roasted them in the oven, in their skins to preserve moisture, then chopped and added them to freezer baggies in small portions.

Surprisingly, the beets tasted just as good after a couple months in the freezer as they did the day I roasted them.

So I made my favorite salad with them, Roasted Beet Salad with Goat Cheese, and served it to company.

Um, didn’t I just say beets are divisive…and I served a salad with beets to company?

I guess I didn’t get it- but in my defense, I thought I was safe because our company were gardeners, and don’t most gardeners grow beets?

Well, not the one sitting at my table. He promptly said, “Beets are the one vegetable I don’t eat” and proceeded to give me the dirt comparison.

Great – of all the vegetables on the planet I pick the one he didn’t eat.

Of course I said he didn’t have to eat them, but he decided to try them anyway. The verdict?

“These are the best beets I’ve ever eaten. They don’t taste like beets!”

Whatever that means, ha! I’ll take the vote of confidence anyway.

Now I make sure to grow enough rows to be able to freeze beets in small packages to last me through the winter.

Though I only serve them to people I know will enjoy them – I don’t want to waste them.

How to Prepare, Oven Roast and Freeze Beets

I’m providing a step-by-step tutorial to prepare, cook, and freeze beets because I didn’t know how to prepare them when I first started growing beets and I’m pretty sure that there are people out there who may be as clueless as I was.

Of course, this is just one method for cooking beets, but many of these steps are the same no matter how you decide cook them.

1. Wash the beets thoroughly with a vegetable brush in order to get all the dirt off. (Speaking of dirt, one of the reasons I don’t get the dirt comment about beets is because there are lots of other vegetables like carrots and potatoes that grow in the dirt too, and they aren’t described that way…).

2. Trim the greens off, leaving about an inch of the tops. Trim the roots as well.

3. Place the beets in a shallow baking dish and pour in about 1/4 cup of water.

I suppose this isn’t true “roasting” like when we toss vegetables with olive oil (which you can do with beets, by the way… they get nice crispy edges which is great for that application, but not what I want on a salad…), but it’s like roasting meat, I guess.

Or is it oven braising? We’ll just stick with roasting for now.

4. Cover well with foil and bake at 400 degrees for up to an hour, depending on the size of the beets.

5. Check doneness by inserting a small knife into the thickest parts of the beets.

The beets pictured were fairly large so I cut them in half to speed the cooking time (small to medium beets can be left whole). They were done in about 45 minutes.

6. Let cool until you can comfortably handle them.

7. Cut the rest of the tops and bottoms off and skin the beets by pulling with a small knife.

Some directions say to put gloves on and “rub the skins off” but that hasn’t worked well for me, but you do what works for you. And I don’t wear gloves- I just wash my hands afterwards and don’t have a problem with staining.

8. Cut the beets into chunks or slices- however you want to serve them later. I like chunks that are easy to add to a salad.

9. Place them in a freezer container, label, and freeze.

I remove the air from my freezer baggies with a straw and it keeps most of the frost out of the packages.

Try to use the frozen beets within 6-9 months for best flavor.

One time, though, a few baggies got shoved in the back of my freezer and I found them a year later. I served them anyway and was shocked that they were still pretty tasty.

However, a baggie I found after 1-1/2 years didn’t fare as well and the beets were shriveled and soggy.

Of course this was before I had the chalkboard freezer organizer which helps me keep better track of what we have for planning menus and using up food.

Can you freeze raw beets?

Yes, but they will not be as convenient as already cooked. Cut the raw peeled beets into small dices, transfer them into a freezer bag, label and freeze. Any beet variety can be frozen like this.

If you’d like grated beets, you can freeze them raw – grate and lay out on a cookie sheet to flash freeze before transferring to freezer containers.

Can I put beets in the freezer without blanching?

Yes, if the beets are peeled and cut into smaller pieces first (or grated like above).

What is the best way to freeze beets?

It depends on how you want to use them – grated raw or diced beets are good for using raw in salads or adding to soups. Roasted beets can be used to top salads or heated as a side dish with butter that only has to be thawed and warmed.

How long do beets last in the freezer?

Beets store in the freezer about 12-18 months. 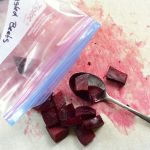 How To Roast And Freeze Beets

Oven-cooked beets freeze beautifully and after thawing taste just like cooked fresh, making them perfect for salads, sides and other recipes.

*You can use any amount of beets you want – for smaller amounts use a smaller pan, for larger a larger pan or two pans.
Note: While you could dry roast the beets by peeling while raw and roasting on a baking sheet like potatoes, that tends to dry them out more and they don’t freeze as well.

Other Vegetables You Can Easily Freeze

How to Freeze Green Beans without Blanching

How to Freeze Snap Peas Without Blanching

This article has been updated – it was originally published in June of 2010.