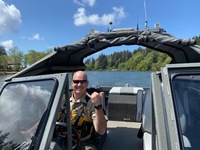 Deputies responded to the area of Territorial Hwy. near Demming Rd. just after 1:00am this morning after receiving reports of a vehicle vs. pedestrian crash.  Upon arrival they learned that a person assisting someone jumpstart a car was struck by a passing vehicle.  The victim was transported to an area hospital with serious injuries, but is expected to survive.  After the crash, the vehicle fled the scene southbound towards Veneta.

The suspect vehicle is believed to be a pickup, possibly a Chevrolet Silverado.  It is likely to have damage to the front and/or passenger side.  Broken pieces of dark green painted plastic were left behind by the suspect vehicle.

On 05/26/2022 Lane County Sheriff’s Deputies responded to a residence in the 3500blk of Valentine Ct. in Springfield regarding an in-progress burglary.  Neighbors of the involved residence called 911 to report that three unknown people were stealing property from within the location.

When confronted by a bystander, one of the suspects shoved the bystander to the ground.  The bystander struck his head on the pavement and was rendered unconscious. The suspect also placed another bystander in a headlock and threw her to the ground before rummaging through her purse. The suspect, later identified as 28 year old Tanner Glen Mace, fled the location on foot.  Mace was located hiding in a nearby yard and taken into custody. The injured bystander was transported to an area hospital for treatment.

Two other suspects involved in the burglary had been able to flee the location in a U-Haul pickup.  They are described as a white male adult wearing a gray hooded sweatshirt and baseball hat and a white female adult with brown hair and a short, thin build.

Anyone with information about this case is asked to contact the Lane County Sheriff’s Office at 541-682-4150 opt. 1.

The Lane County Sheriff’s Office is partnering with Bi-Mart again this year to offer free boat inspections to help you get on the water safely! We can help you make sure you have everything you need.

Bring your boat (any kind) to the below listed Bi-Marts on the scheduled date/time and a Lane County Sheriff’s Office Marine Patrol Deputy will inspect your boat for free!

Investigators were able to determine that 26 year old Denver Timothy Bell was the outstanding suspect in this case.  Deputies located him at a residence in the Florence area yesterday afternoon and he was taken into custody without incident.

*UPDATE* Investigators have determined that 48 year old Denver Vollie Bell is NOT a suspect in this case. Other investigative leads are still being followed.

Thanks to the watchful eye of some citizens the stolen side-by-side has been recovered.

Yesterday LCSO received a call from a citizen indicating that they had observed two males attempting to use a Can-Am side-by-side ATV to get a suspicious truck unstuck from the sand near the Chapman sand road south of Florence.  The caller texted a picture of the side-by-side to LCSO dispatch at which time it was believed that it was the stolen side-by-side from earlier in the weekend.  Law enforcement personnel converged on the area and located the involved truck and one of the involved males, 29 year old Jessy Anthony Robles.  The truck was confirmed to be stolen and this male was taken into custody.  Around this time, another citizen called to report that they had seen someone driving the stolen ATV in the area.

The US Coast Guard Sector North Bend, with a helicopter in the area, spotted the stolen ATV in a brushy area nearby.  It was abandoned by this time.  Law enforcement attempted a K9 track from the ATV but were unable to locate the second suspect.

The second suspect is believed to be 48 year old Denver Vollie Bell.  Bell is described as a white male adult with brown hair and green eyes.  He stands approximately 5’06” and weighs approximately 150lbs.

Roble was transported to the Lane County Jail and lodged on charges including: 2nd Degree Burglary, 2nd Degree Theft, Unauthorized Use of a Motor Vehicle (x2), and 1st Degree Criminal Mischief.  He was also lodged on an unrelated warrant out of Utah.

The Lane County Sheriff’s Office is particularly thankful for the citizens and responding agencies that aided in this case. In addition to our watchful citizens, success in this case was made possible by the assistance of outside agencies including the Oregon State Police, Douglas County Sheriff’s Office, and US Coast Guard Sector North Bend.  Employees with Torex ATV Rentals and Oregon State Parks also assisted with retrieving the recovered ATV off of the sand.

Deputies and Troopers responded to an alarm at the US Forest Service work center in Siltcoos.  Upon arrival they discovered someone entered the building and stole a side by side ATV. The stolen side by side is a 2021 Can-Am Maverick 4-seater ATV.  It is black and tan in color.  This ATV belongs to the Lane County Sheriff’s Office and was being stored at the work center at the time of the burglary.  The burglary was believed to have occurred just prior to 1:00am.

Funding for this equipment is provided through Oregon Parks and Recreation.  The Sheriff’s Office relies on this equipment for dune safety patrols, crash response, and search and rescue operations.

Anyone who may have information about this case is asked to contact the Lane County Sheriff’s Office at 541-682-4150 opt. 1.

Tom served the citizens of Lane County as a public safety officer for over 40 years.  He started his career as a Lane County Sheriff’s deputy assigned to the Florence area in the early 1980’s.  He began employment with the Eugene Police Department shortly thereafter, where he continued to serve for over 20 years.  In 2006, Tom returned to the Sheriff’s Office where he went on to become the Lane County Sheriff.  He retired from the Sheriff’s Office in 2015 and accepted the position of Chief of Police at the Florence Police Department until his passing.

Tom served in a multitude of assignments throughout his career.  These assignments included police patrol, detectives, and SWAT commander.  Tom was an excellent leader and well-known for his cheerful personality.  He was rarely observed without a smile on his face.

Tom’s family have asked that in lieu of sending flowers, those wishing to donate consider offering contributions to local charity. Non-profit organizations that meant a lot to Tom include: Siuslaw Outreach Services, The Jazz Station, and National Night Out | City of Florence Oregon.

The service will take place at 1:00PM at First Baptist Church located at 3550 Fox Meadow Rd. Eugene, OR 97408.  The service will include various police honors and will be open to the public dependent upon available seating.

At approximately 2:45pm today LCSO deputies and EPD officers responded to Spencer Butte Park on S. Willamette St. regarding the report of an armed subject.  A caller had advised that a female was in the park waving a gun around and pointing it at her head.

Upon arrival officers and deputies began searching for the female.  She was seen near the parking lot and retreated into the brush when contacted by authorities.  As officers and deputies closed in on her, she continued to try and walk away from them. She was taken into custody and a bb-gun was found in her possession.

The female was identified as 39 year old Shelly Ann Reed. Reed had a confirmed warrant for her arrest from an unrelated case.  She was lodged at the Lane County Jail on the warrant and a new charge of Disorderly Conduct. 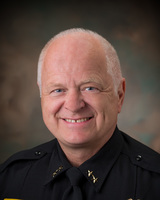 Please see the attached files for a News Release that is being sent on behalf of the Florence Police Department.

On 05/11/22 just after 9:00pm, the Lane County Sheriff’s Office received a call from a homeowner in the 3500blk of Hayden Bridge Rd. The homeowner stated he was hearing sounds coming from his attic and that he thought someone might be up there. The homeowner said he heard thumping sounds and possibly someone coughing.

Deputies responded and determined that someone unknown to the household was likely in the attic.  With the assistance of a Springfield Police Department K9 Officer, 43 year old Nicholas Rollin Tirapelli, was found hiding in the attic. Tirapelli was uncooperative and refused to be taken into custody.  Even after being bit by the K9, Tirapelli continued trying to kick and spit on deputies. He was taken into custody and lodged at the Lane County Jail after being treated at a local hospital.

There had been a burglary in the same area the night prior.  Further conversation with the homeowner revealed that Tirapelli had likely been hiding in the attic since the previous night.  Deputies are investigating to determine if Tirapelli had been involved in this burglary as well.

On Saturday, May 7th, 2022 rescuers from Eugene/Springfield Fire and the Lane County Sheriff’s Office responded to the report of a capsized canoe in the Willamette River.  Just prior to 3:30pm a citizen called to report that a canoe being operated by a male had capsized near the Owosso Footbridge.  The male had been seen struggling in the water before slipping beneath the surface.  Searchers saturated the area but were unable to find him.

Investigators from the Lane County Sheriff’s Office believe the involved male to be 36 year old Justin Leroy Grossman of the Eugene area.  Grossman had reportedly been camping on an island in the river and was using the canoe to commute to and from it when the boat capsized.

Searchers have continued to search the area.  Anyone with any information about this case is asked to contact the Lane County Sheriff’s Office at 541-682-4150 opt. 1.

19 year old William Vaughn has been identified as the deceased person located in the water near Lowell on Saturday.  There are no obvious signs of foul play at this time.

19 year old William Robert Henry Vaughn was last seen at approximately 1:00am this morning near the Lowell covered bridge.  He was separated from his group and did not return home. He was last believed to be walking westbound on Hwy. 58.

Vaughn is described as a white male adult standing approximately 5’09” to 5’10”.  He weighs about 140lbs and has brown curly hair and hazel eyes.  Vaughn was last seen wearing a high visibility hooded sweatshirt and jeans.

Anyone with information regarding Vaughn’s whereabouts are asked to contact the Lane County Sheriff’s Office at 541-682-4150 opt. 1.