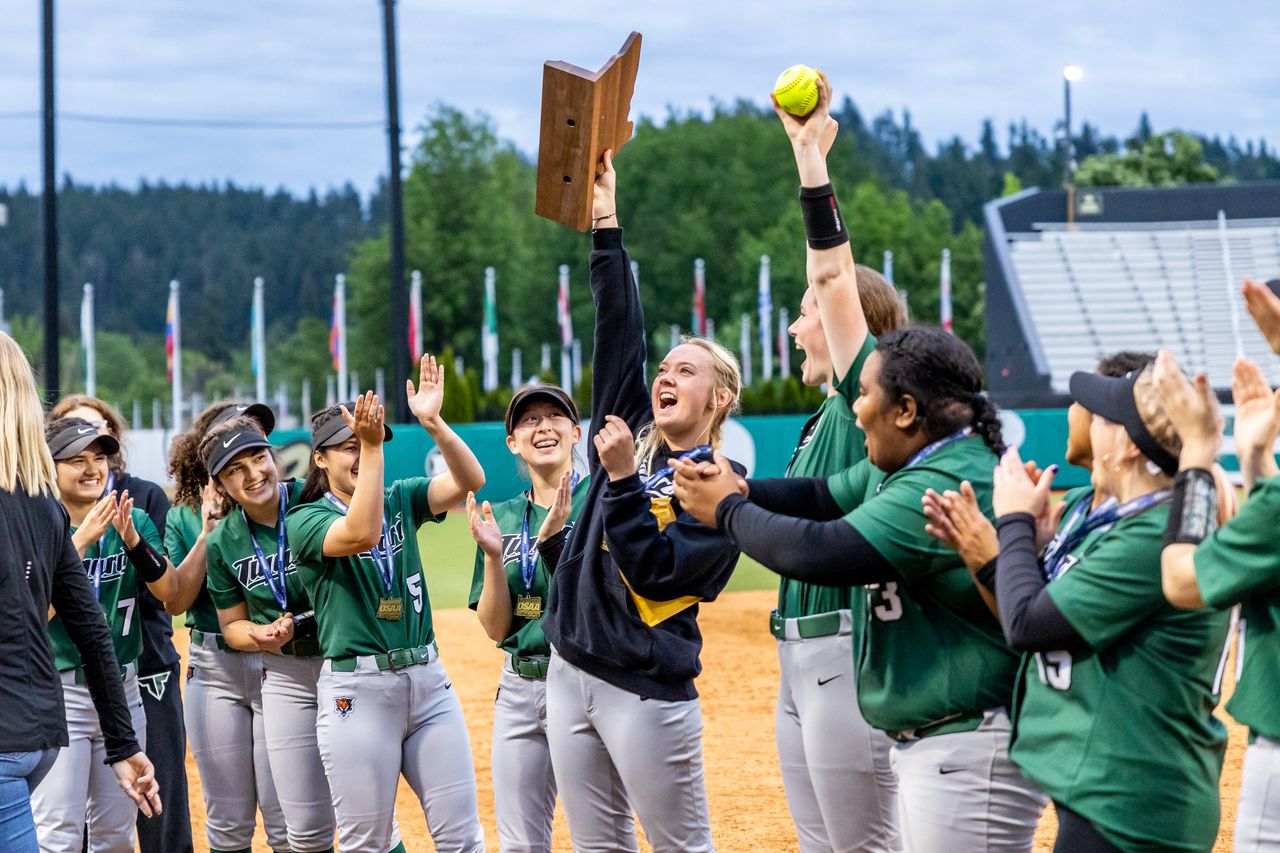 EUGENE — Up until the last at-bat, Saturday’s Class 6A softball championship game was all about pitching. Oregon City’s Lily Riley dueled with Tigard’s Makenna Reid, who struck out an OSAA championship game-record 21 batters over 10 intense innings. Riley was impressive in her own right, striking out 14 without allowing an earned run in nine innings.

At the end of the night, someone had to lose. It was catcher Karen Spadafora who played hero, ripping a walk-off single to send the Tigard fans home happy with a 1-0 victory at Jane Sanders Stadium. It took until the 20th frame of softball for a team to score a run.

Reid, the Florida State-bound left-hander, brought the heat from the beginning. She consistently pounded it by the Pioneers batters, striking out the first nine she faced.

“The first three innings, I felt really good,” Reid said. “I felt like I was throwing hard. Especially when you’re tired, you’re just running adrenaline and you’re trying to get through it.”

Oregon City’s Riley nearly matched Reid. She set down the first nine batters, striking out seven of them.

After three innings of play, all 18 batters had been retired, 16 via strikeout. Only one ball had been hit into fair territory.

The Tigers finally hit one in play against Reid in the fourth inning, as Ellie Joseph popped out to first base. Gina Allen then reached on a dropped putout by second baseman Kali Kisor, but it didn’t phase Reid. She struck out the next two, bringing her total to 11 through four no-hit innings.

The second baserunner of the game came on another error by Kisor in the fifth inning. Reid then issued a walk, which was the first real blemish against either pitcher. She buckled down once again, recording her 12th strikeout and inducing a groundout to short.

Riley kept her perfect game going through four innings, retiring the first 12 with eight strikeouts. Kani Korok broke it up with a leadoff single in the bottom of the fifth, the first hit for either team.

After center fielder Chloe Grimmer made a running catch, she was able to double off Korok, who touched second base and then tried to run back. The umpires initially missed the call, but insistence from the fans and an umpires meeting got them to overturn it.

Tensions increased as the game went on. Fans were on their feet, cheering, chanting and stomping passionately with every pitch as the Three Rivers League rivals dueled. Tigard had a full-on student section by the third base line, which would occasionally shout at the umpires or lead organized cheers.

“I didn’t really let the people in the stands and the shouting and all that get to me,” Reid said.

Riley struck out the side in the bottom of the sixth, sending the game to the seventh with it still knotted up at zero.

Allyson Nording broke up Reid’s no-hitter with one out in the top of the seventh. The Tigers immediately erased her on a double play, keeping the game scoreless.

Riley worked around a two-out walk to throw a scoreless bottom of the inning, which sent the fast-moving game to extras.

“I was sitting on the bench, just warming up my arm,” Reid said. “I just didn’t want to lose, so I was going to do everything it took.”

Reid struck out the side in the eighth, bringing her total to 17 on the evening. The Tigers also went down in order as neither team threatened.

Oregon City’s Gina Allen had the first extra-base hit of the game, a one-out double in the ninth. Reid struck out the next two, tying the championship game record of 19.

Once the game got to the 10th inning, the offense started with a runner on second. In the top of the 10th, an infield single put runners on the corners with one out for Oregon City. Reid collected her record-setting 20th and 21st strikeouts to miraculously keep the Pioneers off the board. She screamed as she sprinted off the field and into the dugout.

“I was thinking, ‘Just hit my spots,’” Reid said. “They weren’t really hitting the outside pitch… When she tried to bunt that last out, that was just great. Like, let’s go. Come on. Especially when you have a 0-0 and runners on second and third and you get out of it, it’s amazing.”

With the momentum swaying in Tigard’s direction, catcher Karen Spadafora wasted no time in walking it off with a leadoff single. The dark green sea of students chanted “SPADAFORA!” as she cried tears of joy on the sideline.

“It’s everything, really,” Spadafora said. “There was a lot of pressure obviously, but I think that we just got it done. It was a really cool experience because we did it as a team and we did it all together, and it’s a team victory.”

Reid shared a hug with her dad after the game. She said she’s leaving for college on Sunday, so the moment was meaningful to her. She ended her high school career on quite a high note as she transitions to a new career at Florida State.

“It feels weird knowing that we’re not gonna have practice tomorrow,” Reid said. 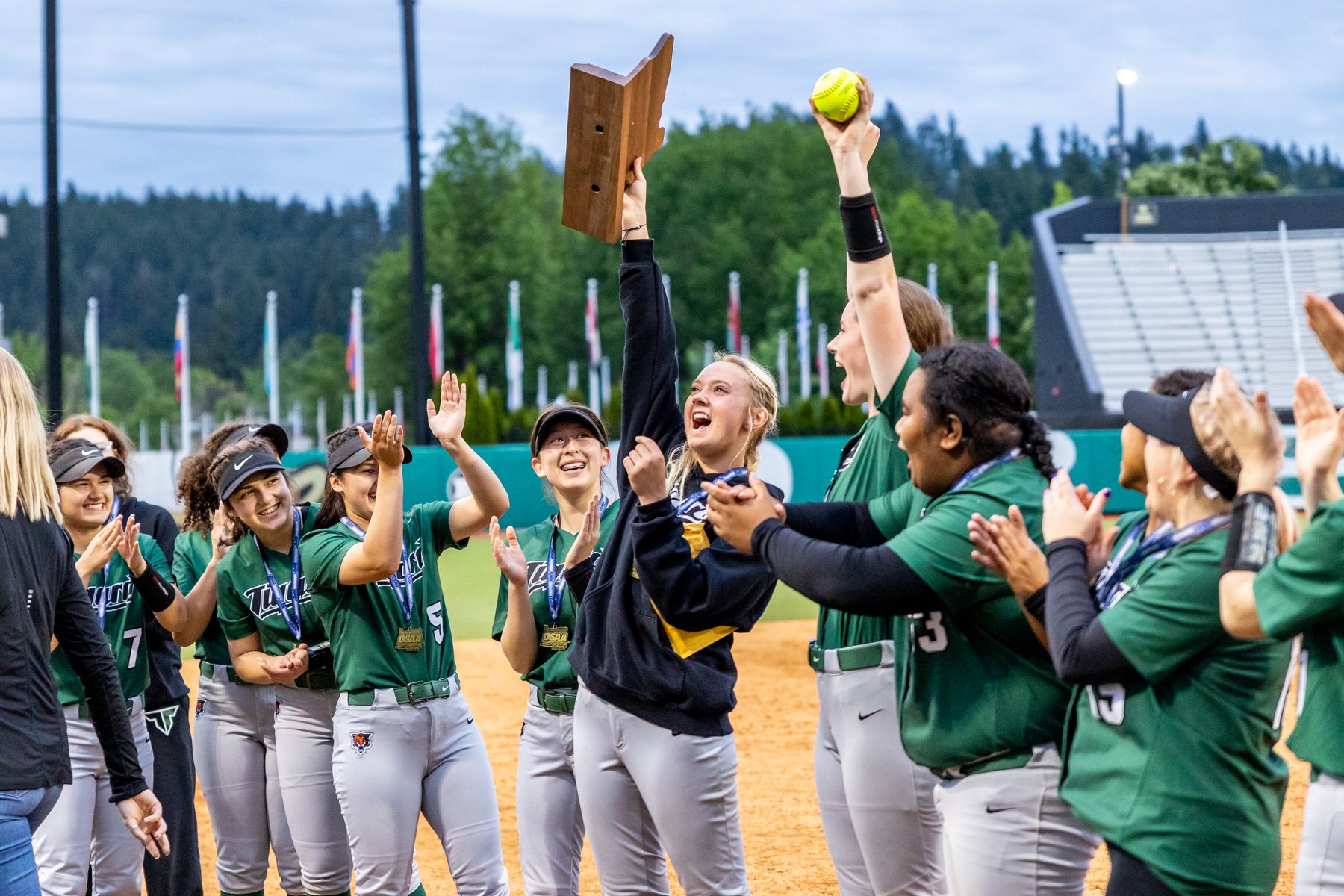