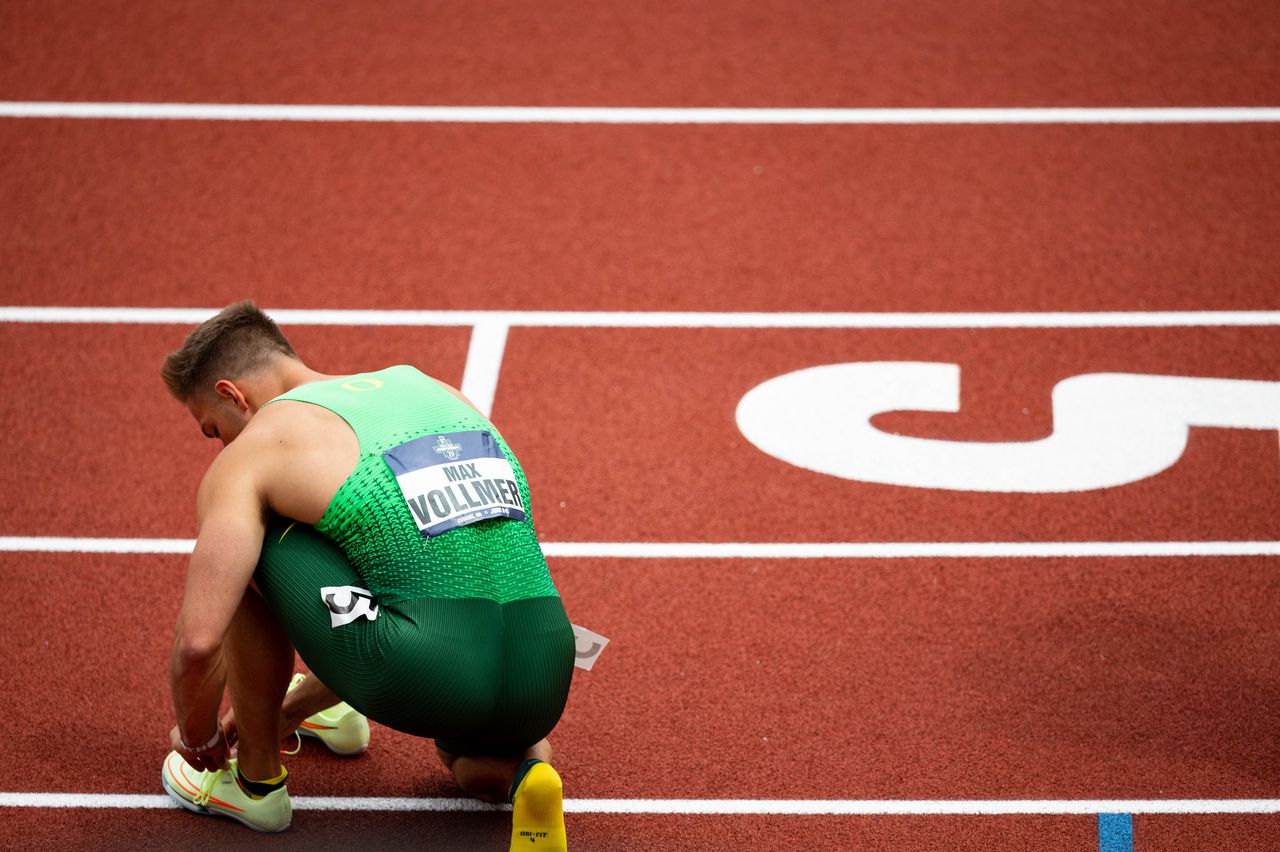 EUGENE — Oregon Ducks sprinter Micah Williams blazed to the day’s fastest qualifying time in the 100 meters Wednesday to get the NCAA Outdoor Track & Field Championships off to a flying start at Hayward field.

In a loaded heat that included Olympic 200 finalist Joseph Fahnbulleh of Florida and Matthew Boling of Georgia, Williams started well and was never challenged en route to a time of 10.03 seconds.

The race was run into a slight headwind, but Williams was undeterred. Fahnbulleh and Boling also advanced to Friday’s final. The other two heats were contested with a tailwind.

The 100 was the best 10 seconds of Oregon’s day. The Ducks picked up an unexpected eighth-place finish from Aaron Bienenfeld in the final of the 10,000. UO decathlete Max Vollmer had a good Day 1.

But elsewhere the Duck came up empty before a crowd of 8,466. Their long-shot bid for a top-four finish and a team trophy now seems out of reach.

Florida and Texas had perhaps the best Day 1 of what was expected to be a four-way tussle with North Carolina A&T and Georgia for the men’s team title.

The fight continues on Friday, when the men’s competition wraps up.

The most exciting individual event on the track on Wednesday was the unevenly run men’s 10,000.

Campbell’s Athanas Kioko set a rocket pace early, but nobody went with him. The pack stayed patient, convinced Kioko couldn’t sustain it.

“I think that’s something comes with experience,” Bienenfeld said. “In a race like this you just stay calm. I saw the 1k split. I was like ‘Nobody on earth is going to run that.’ Or this guy is going straight to the worlds and probably headed for the podium.”

Sure enough, Kioko came back. By the last lap, pre-race favorite Abdihamid Nur of Northern Arizona seemed to have things in hand.

But Notre Dame’s Dylan Jacobs challenged Nur on the last lap’s back straight, passed him on the turn and claimed the race in 28 minutes, 12.32 seconds. Jacobs covered the last lap in 55.45.

Bienenfeld at least put up a point for his team on the scoreboard.

“It was a weird competition today,” he said. “I really wanted to score here. That was the minimum goal.”

Vollmer set himself up for Day 2 of the decathlon, which will be the only men’s event on Thursday. He ended Day 1 in fifth place with 4,215 points.

He didn’t like the way the competition opened in the 100 meters. He tied his shoes so tight, he lost feeling.

But he bounced back in the long jump and shot, and set a personal record in the high jump with a clearance of 6 feet, 6 inches.

“I’m confident for tomorrow,” Vollmer said. “I think I have lots in the tank. The second day is usually my strong day, and the last couple weeks of training have been really good.”

Ayden Owens-Delerme of Arkansas leads the decathlon after five events with 4,490 points. Collegiate record-holder Kyle Garland of Georgia is lurking in second with 4,441.

If Wednesday’s prelim is any indication, Williams looks like he is ready to rumble in Friday’s 100 final.

The sophomore from Portland’s Benson High School, declined interview requests, keeping his thoughts to himself.

Here are results from the NCAA Outdoor Track & Field Championships.

— Ken Goe for The Oregonian/OregonLive 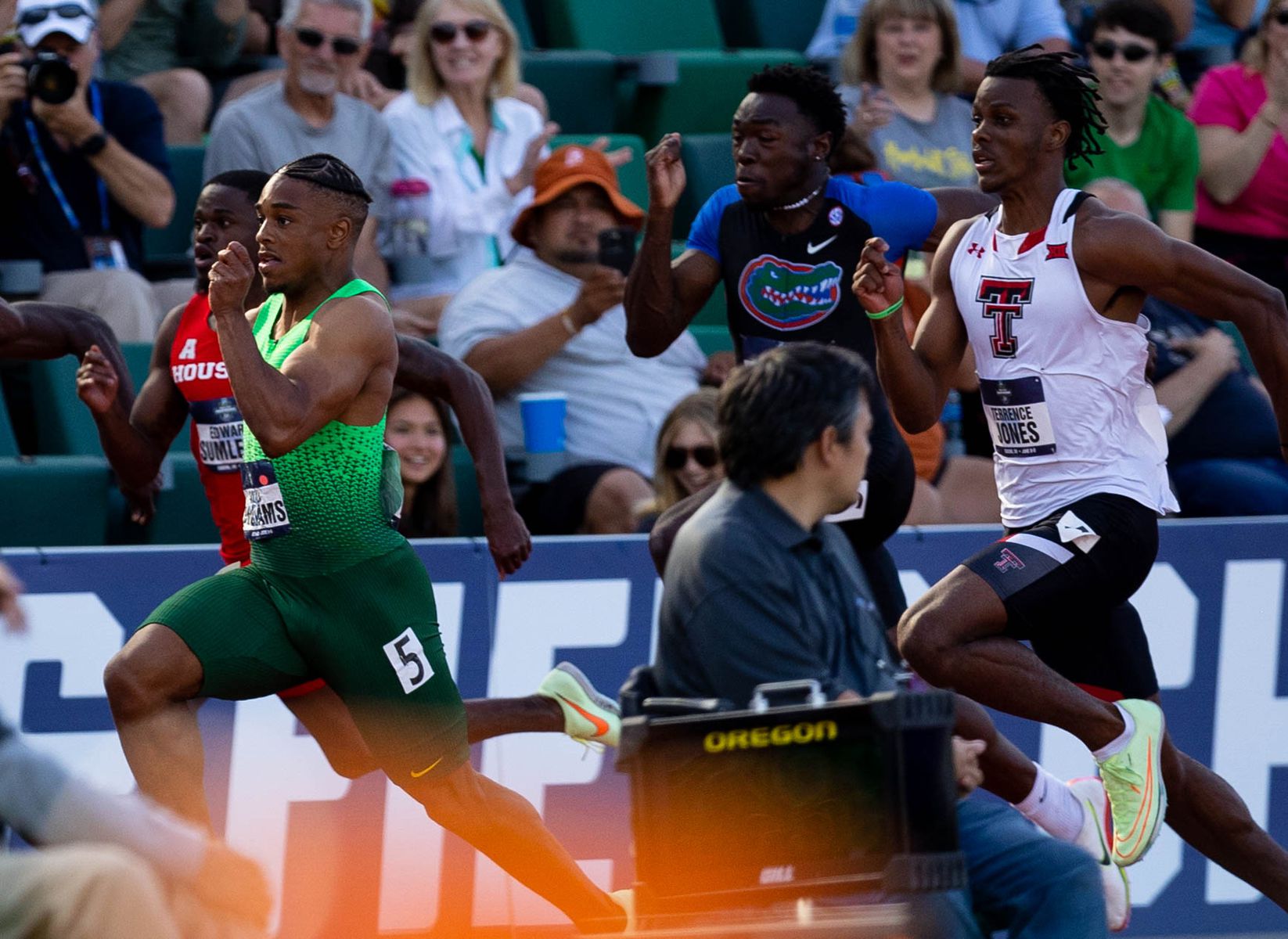