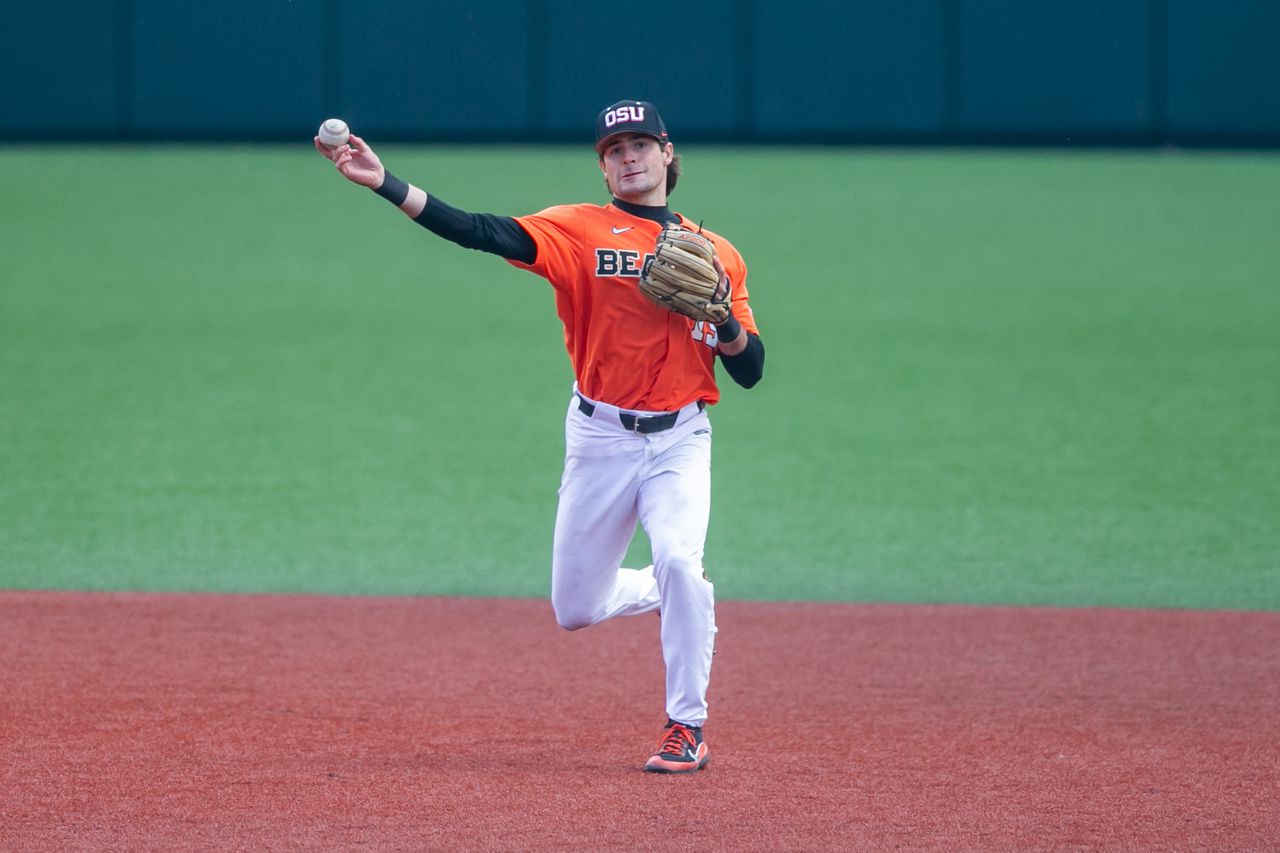 CORVALLIS — It was, in almost every conceivable way, a cleaner, crisper and much more comforting performance.

Or, as Oregon State baseball coach Mitch Canham put it: “It was a much better day.”

The Beavers responded from their shaky opener of the Corvallis Regional with a performance befitting a No. 3 national seed, flexing both depth and dominance in a 12-3 victory over the San Diego Toreros Saturday night at Goss Stadium.

With the win, Oregon State (46-15) advanced to Sunday’s regional final, where it will play the winner of an afternoon losers’ bracket matchup between Vanderbilt and San Diego (37-19) at 6 p.m.

And if the Beavers play anything like they did Saturday, a trip to the super regionals is on the horizon.

It was clear from the first inning that things would be different for the Beavers on Saturday. Justin Boyd opened the game with an infield single, Wade Meckler followed with a first-pitch rope to right and Garret Forrester walked, loading the bases before some in the crowd of 3,973 had time to find their seats. By the time the inning was over, a two-run triple by Jake Dukart and a two-run error by Toreros third baseman Jack Costello delivered the Beavers a 4-0 lead and they were off.

By the fourth, after Oregon State added runs in each of the next three innings, they led 9-0 and the rout was on.

The Beavers went on to smash 13 hits as five different players finished with multi-hit games. Meckler went 3 for 4 with a double and three runs. Matthew Gretler and Kyle Dernedde each added two hits and a double. Travis Bazzana hit a solo home run and scored three runs. And Forrester continued his prodigious postseason, finishing 2 for 4 with a two-run home run, three RBIs and two runs scored.

All the while, the Beavers’ defense was exceptional, resembling the team that led the nation in fielding percentage most of the season rather than the one that committed an alarming 13 errors in the previous five games.

Oregon State turned three double plays, including a 3-6-3 beauty in the sixth. That same inning, catcher Gavin Logan threw out a would-be base stealer at second base, picking a ball out of the dirt and firing a bullet across the diamond. And in the eighth, reliever Brock Townsend turned in the highlight of the night on a dribbler to the right side. He sprinted to collect the slow-roller, fumbled the ball to the ground, then scooped it up with his glove and, in one motion, flipped it with a backhand to first.

The crowd erupted and Forrester screamed and pumped his fist after making the put-out at first.

“That’s what we expect all the time,” Canham said of OSU’s defense. “Today, the confidence they were playing with was at a much higher level, as opposed to worrying or thinking or trying. We were just going out there and doing today. But that’s, again, what we expect every day because they are highly capable.”

As the offense cracked six extra-base hits, including two home runs, and the defense put together multiple web gems, the Beavers’ pitching sparkled, too.

Right-hander Jake Pfennigs bounced back from a shaky outing in the Pac-12 Baseball tournament with a solid 5 1/3 innings, allowing six hits and three runs to improve to 4-0 this season. And Townsend was dominant in relief, retiring the first 11 batters he faced over 3 2/3 scoreless innings. He allowed just one hit and finished with five strikeouts to earn his first save of the season.

After a sloppy debut, during which Oregon State had multiple base-running blunders, committed two ninth-inning errors, went just 2 for 14 with runners in scoring position and issued seven free bases against an inferior team, the complete and dominant performance was reassuring for the OSU faithful.

“Yesterday, I feel like we played tight as a group,” Meckler said. “I felt we felt the pressure of the postseason a little bit. But we came back, played loose today, played free, played the way we can. That’s extremely important, just sets a lot of momentum, playing loose in the postseason and not playing tight two games in a row.”

And now, the Beavers find themselves in an enviable position in the regional. They’re 2-0, playing at home, feature a mostly rested pitching staff and will face an opponent playing the second game of a do-or-die double-header.

This time last year, it was Oregon State — after losing its regional opener — needing to win a Sunday double-header to force a win-or-go-home finale. It didn’t end well.

“I think we learned the hard way last year, losing that first game and having to win, what, five in a row,” Dukart said. “It’s like Wade said, we’re in the driver’s seat now. The teams have to come out and win tomorrow morning. And then we’ve got fresh pitching. We’ve got (Jacob) Kmatz ready to go tomorrow and (we’re going) to come out with the same energy and confidence like we did today.”

— Joe Freeman | jfreeman@oregonian.com | 503-294-5183 | @BlazerFreeman | Subscribe to The Oregonian/OregonLive newsletters and podcasts for the latest news and top stories. 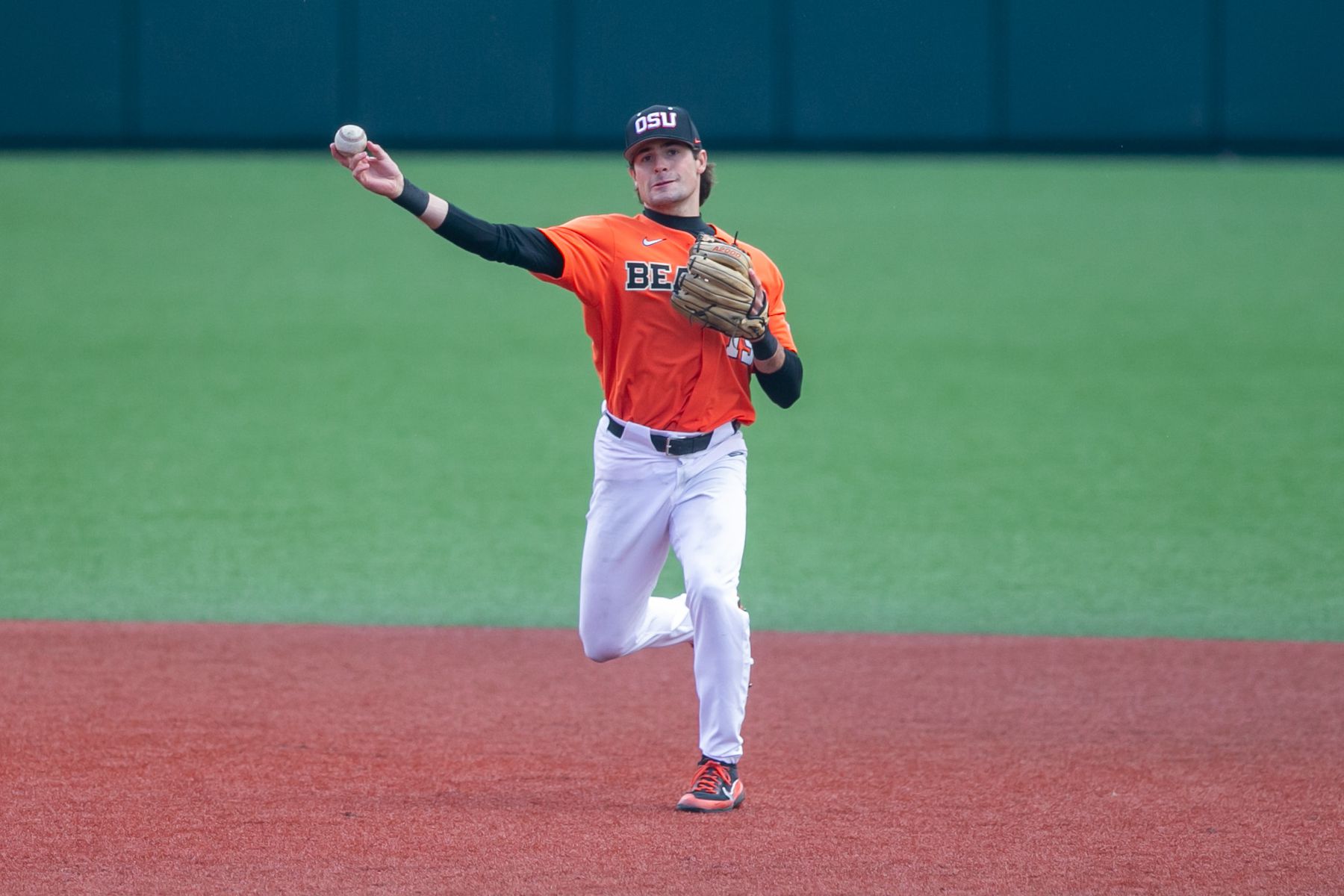