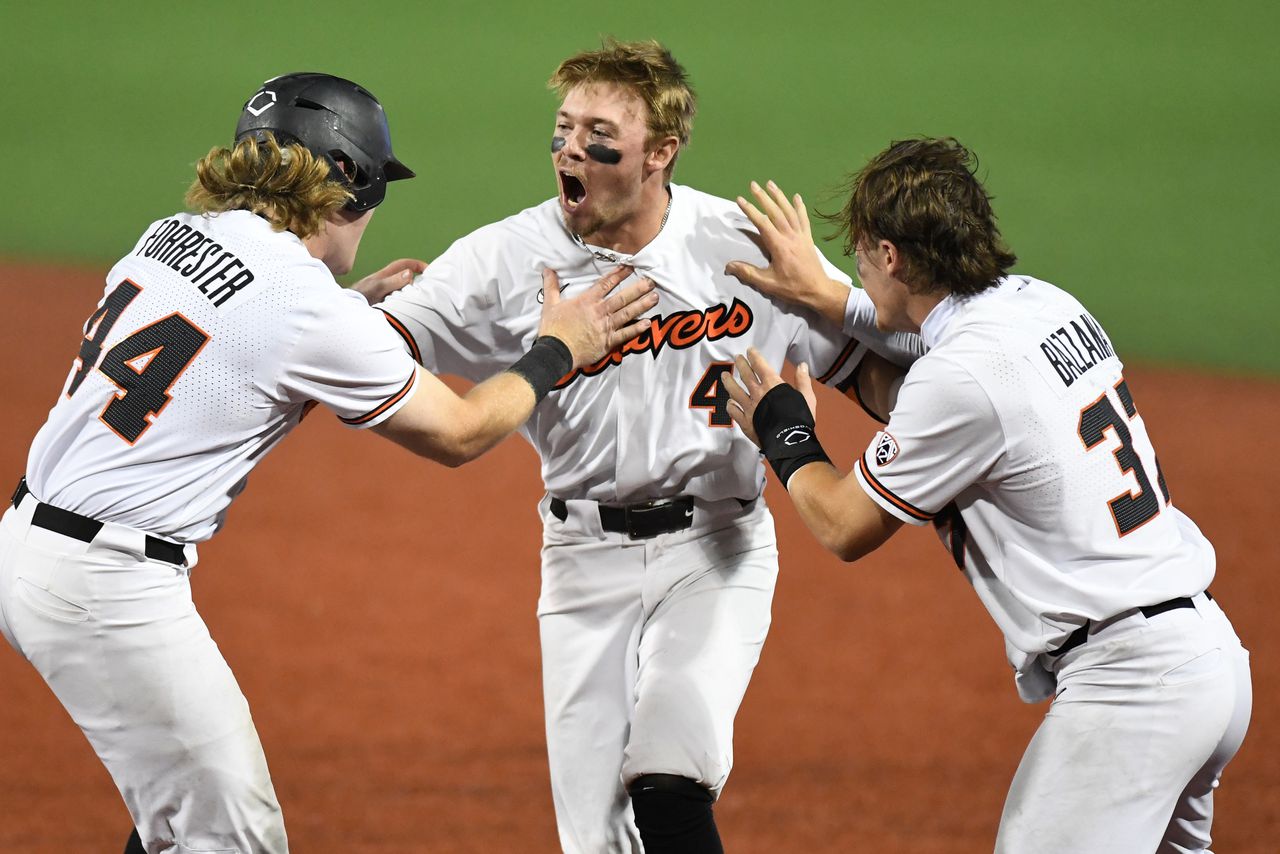 CORVALLIS — There was a mob of orange and black on the infield turf at Goss Stadium Friday night.

Oregon State baseball players hugged and howled and tossed helmets after narrowly escaping the New Mexico State Aggies on a walk-off walk by Justin Boyd in the opening round of the Corvallis Regional.

But roughly 25 minutes after the 5-4 10-inning win, as they strolled into the interview room for a postgame Q&A, the celebration had transformed into something more akin to angst.

“We did not play well at all,” Beavers coach Mitch Canham said. “So (we’ve) got to take a firm look in the mirror. Win, lose or indifferent, we always have to find a way to get better. I anticipate our guys, as always, to come out (Saturday) and compete and have great energy and keep their head on their shoulders.”

Perhaps the most prevailing thing lingering in those heads late Friday was a sense of relief.

The Aggies entered the regional as the NCAA Tournament’s biggest underdog, sporting a record eight games below .500 and qualifying only because they stunningly swept their way through the WAC tournament to earn an automatic bid. On top of it all, they faced the No. 3 national seed and one of college baseball’s best starting pitchers in front of 3,988 rabid fans — a far cry from their usual atmosphere.

“If you ask our three-hole hitter, it’s 30 people,” Tommy Tabak said, when asked what kind of crowd he plays before at New Mexico State. “But it’s like 200 people.”

Even so, there the Aggies were, going toe to toe with one of college baseball’s best. Ian Mejia pitched a gutsy game, bobbing and weaving his way around trouble all night, making just the right pitches in just the right situations to avoid catastrophic damage. He gave up nine hits and walked four, but he also struck out nine and stymied the Beavers when they put runners on base, allowing just two hits in 14 chances with runners in scoring position. He threw a career-high 124 pitches in 7 1/3 innings and was so inspiring, the Goss crowd gave him a standing ovation when he left in the eighth inning.

And while New Mexico State (24-33) struggled most of the night against Oregon State ace Cooper Hjerpe, the Aggies made just enough timely hits to keep things interesting.

Tabak smacked a single to center in the second to tie the game 1-1. Then he ripped a two-run double in the seventh to make it 3-3. And in the top of the ninth, when the Aggies were three outs away from defeat, Preston Godfrey drove in Nolan Funke with a line drive to right-center, tying the game 4-4.

After Tobak tied the game in the seventh, he tussled his hair a few times and repeatedly thumped his chest as the visiting dugout went ballistic.

“That’s a little hats off to me,” he said of the celebration.” I’m, like, the only Jewish baseball player I could possibly think of. So I always just take my hat off, tip my (yarmulke), just to support myself because that’s just who I am and how I play.”

While the Aggies celebrated, the Beavers struggled. Travis Bazzana was picked-off from second base in the fourth and caught stealing second in the sixth, when he over-shot the bag at second base on a head-first slide. Kyle Dernedde and Garret Forrester committed separate throwing errors in the ninth. And Hjerpe, although he pitched exceptional much of the night, beaned three batters and walked two more, surrendering his most free bases of the season.

And when it mattered most, Oregon State (45-15) delivered. Bazzana started the game-winning rally in the 10th with a one-out walk and then stole second base, prompting the Aggies to intentionally walk Jake Dukart. Then reliever Alex Bustamante imploded, throwing eight consecutive balls. The last one went to Boyd, who strolled to first base and flung his helmet 15-feet into the air as a mob of teammates swarmed him in celebration.

But by the time Forrester, Hjerpe and Canham strolled into the interview room, the celebration had disappeared.

They dodged a bullet, they knew it, and they pledged to play better on Saturday, when they face San Diego at 7 p.m. in the winners’ bracket.

“I don’t think we played to how Beaver baseball usually plays,” Forrester said. “But I’m glad that we were able to sneak out with a win.

“I think we’re going to come out tomorrow … learn from what we did tonight, bounce back and play Beavers baseball how we know it.” 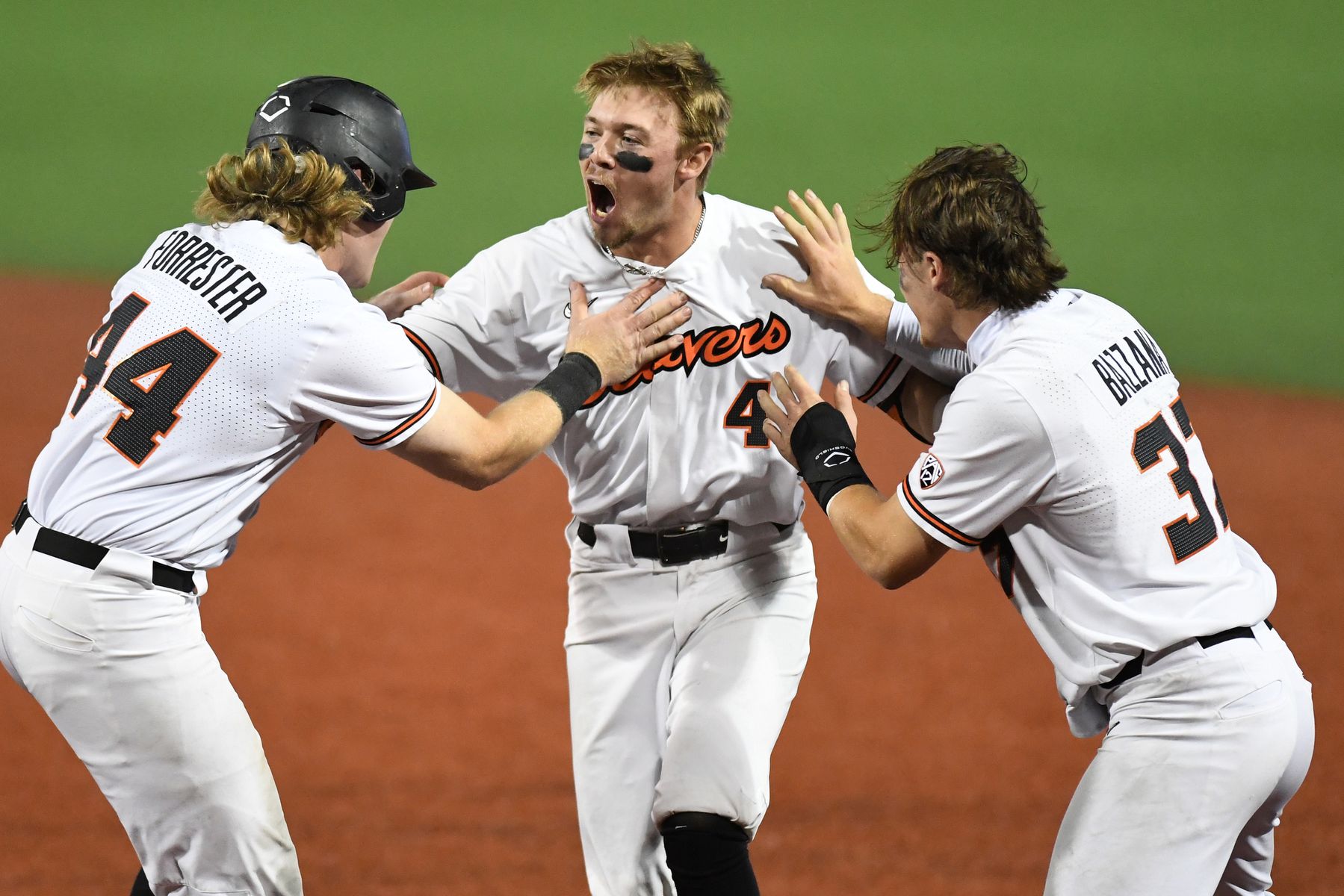