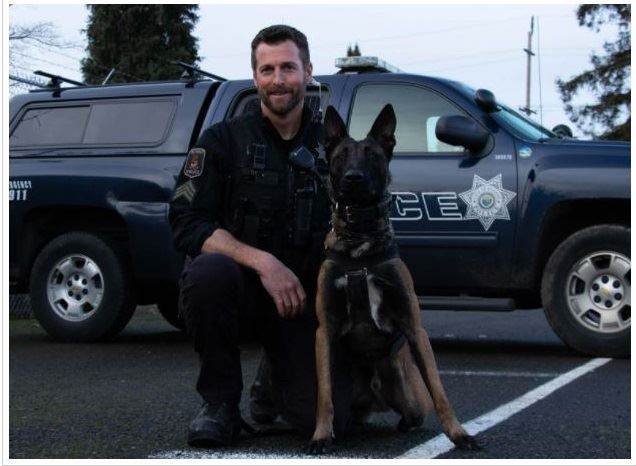 Here is a call that was safely resolved with a blend of police work and the tenacity and effectiveness of the nightshift K9 Unit:

At 2:24 a.m. , on November 9, an EPD officer observed a man driving who had a suspended license and among other things had previously fired off a handgun during an arrest. When the officer attempted a traffic stop at W. 7th Avenue and Tyinn Street, the driver fled, so multiple officers responded to the area. A sergeant located the vehicle at the Side Pocket Tavern on W. 6th Avenue.

Officers reviewed video and found the suspect, Raymond Martin Kennedy, age 37, of Springfield, had fled on foot. K9 Sergeant Rob Griesel with Kuill, and K9 Officer Owen Griffith with Cwyk began searching. At 3:02 a.m., a patrol officer near E. 5th Avenue and Oak Street spotted a person who matched Kennedy’s description. The man suddenly changed direction and disappeared when he spotted police. The officer located a backpack associated with Kennedy in some bushes nearby. Both K9 teams and multiple officers flooded that area to search.

Soon, additional articles of clothing and personal items were located in a northerly direction toward Skinner Butte.  A Springfield Police K9 unit arrived to assist. As Officer Griffith and Cwyk began to find more property belonging to Kennedy, Sgt. Griesel and Kuill began searching the road to the top of the butte. Suddenly, Sergeant Griesel aired on the radio he was with Kennedy, who had made his way halfway up the steep flank of the hill and was hiding from police in the brush.  He was taken into custody without incident.

Other News in Police