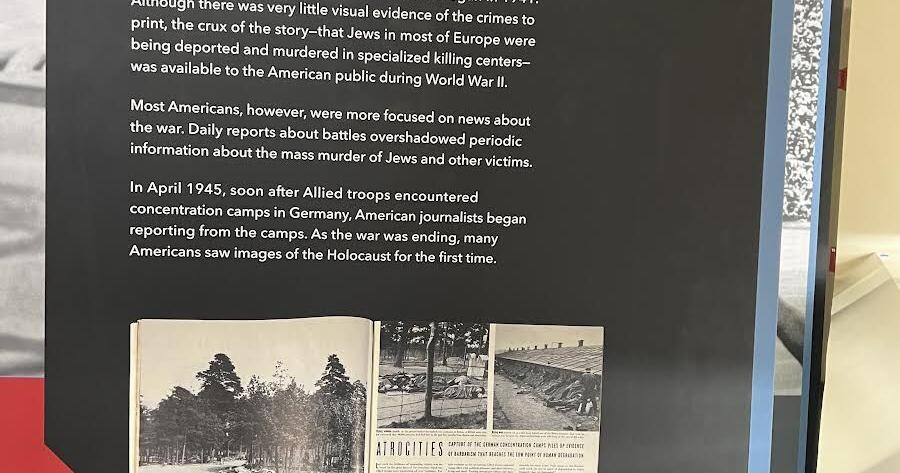 PENDLETON — The “Americans and the Holocaust” traveling exhibition at the Pendleton Public Library is attracting visitors and raising eyebrows about what Americans knew about the systematic genocide of millions of European Jews and millions of others.

Assistant library director James Simpson, who is working on a related project to digitize data on the holocaust for future use by researchers, said, “The information on the (exhibit) panels is supposed to provide the viewer with what we knew.”

The exhibit is on display until July 1.

Simpson pointed out that during the 1930s there were not a lot of articles in American newspapers that mentioned German concentration camps, and the ones that did rarely mentioned they held Jewish people. Sometimes articles mentioned so-called “undesirables” or Poles were in the concentration camps, he said, and there was no mention in newspapers of mass annihilations going on at these camps until the 1940s.

Dachau concentration camp in Germany was opened in March 1933, less than two months after Hitler was appointed as chancellor of Germany. One Associated Press article Simpson found reprinted in the East Oregonian read: “Dachau, Germany — Guards today killed three communists and wounded one who were attempting to escape from a concentration camp.”

Other than this brief mention, news on concentration camps and their prisoners was rarely published, Simpson concluded from his research into local newspapers.

However, he did find local newspaper articles about the war in general, articles with anti-Semitic themes, and “articles about Reichstag laws that prevented German Jews from participating in public office or from leaving the country,” he said. There also were articles about large populations of Poles and Jews being evicted from their homes.

“But what was really going on was that they were marching them to these camps — we now know that,” he added.

Whatever experiences Jewish refugees in America told about in the late 1930s were summarily denied in Germany. One article published in March 1933 by The Observer in La Grande was titled, “Persecution of Jews Denied by German Minister.” Simpson found other locally published articles with similar denials.

“This is a fairly common theme, even in our newspapers. There was a lot of contradiction,” Simpson explained. Of course, this added to the confusion of American readers.

Although some American newspapers and magazines did write about the mass murders of Jews and others in concentration camps after 1941, “there was very little visual evidence of the crimes to print,” the Americans and Holocaust exhibition stated. “Most Americans, however were more focused on news about the war. Daily reports about battles overshadowed periodic information about the mass murder of Jews and other victims,” it read.

The Nov. 10, 1938, issue of the Medford Mail Tribune, which was on exhibit, ran an article titled, “1938 Nationwide Attack Against German Jews — Nazis Wreak Vengeance Upon Jews.” This was about wrecking gangs that destroyed Jewish-owned stores and synagogues.

Another newspaper on exhibit was the Nov. 24, 1942, issue of the Coos Bay Times, an article that exposed the genocide plan. It was titled, “1942 Nazi Plan to Murder European Jews — Half of Jews in Occupied Poland To Be Killed This Year by Nazis.”

‘What more could have been done?’

According to the United States Holocaust Memorial Museum, which produced the traveling exhibition in partnership with the American Library Association, Jews were the primary victims — six million were murdered, but there also were millions of less-known victims.

”Jehovah’s Witnesses were treated pretty much the same (as the Jews),” Simpson said.

Unlike the Jewish prisoners, however, Jehovah’s Witnesses could get out of the concentration camps if they simply signed on the dotted line to renounce their faith and quit teaching from the Bible, which the Nazis viewed as an extreme source of sedition. Few if any Witnesses signed this document.

According to the USHMM, which has a historical display in Washington, D.C., dedicated to Jehovah’s Witness victims, about 1,900 of them were killed in concentration camps. They were targeted by the Nazis because they were politically neutral, and they refused to say the greeting, “Heil Hitler” and refused to join the Nazi military. As a result, they were among the first to be sent to the concentration camps starting in 1933.

However, Jehovah’s Witnesses also were international publishers of The Golden Age and Consolation magazines, which were printed in New York and distributed worldwide, including Germany. So in 1937, when reports and concentration camp diagrams from Jehovah’s Witness prisoners were smuggled out of Germany to New York, they were published. By 1946, The Golden Age and Consolation had identified 60 different prison and concentration camps to American readers and internationally.

“Even though Americans had information about the persecution and later murder of European Jews, rescuing them never became a priority for the United States or for the vast majority of the American people,” stated the library’s tour script. Simpson said it was up to each exhibition viewer to answer the question, “What more could have been done?” 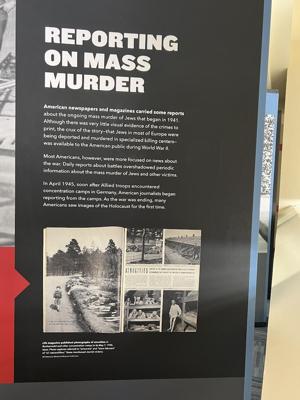