PENDLETON — Ten years ago, Eastern Oregon Regional Airport in Pendleton was an albatross: an expensive relic left over from World War II.

“It was a pretty sleepy little regional airport, to be honest,” Pendleton Mayor John Turner said.

Back then, the airport only had 20 employees, and there wasn’t enough economic activity to justify a regular flight to Portland.

But the Pendleton airport did have two massive runways that date back to World War II and carry a storied history. This is where the so-called Doolittle Raiders — the pilots who first bombed Tokyo, taking off from the deck of the aircraft carrier USS Hornet in the middle of the Pacific Ocean — trained for that mission.

In 2012, Pendleton hired a new economic development director, Steve Chrisman, and one of his top priorities was figuring out a better use for the airport. On his first tour, he met Oregon National Guard Lt. Col. Alan Gronewald, who was overseeing a drone test.

Chrisman said the officer had a simple message for him: “He said, ‘Listen, I don’t want to tell you your job Mr. Economic development guy, but this world is coming fast.’”

Gronewald was talking about drones. So in partnership with the University of Alaska-Fairbanks, the city applied to become a federally-approved drone test range. It was a long shot; Oregon had neither a long history of working with drones nor as much money as others states. But in 2013 the Pendleton Unmanned Aircraft System Range was granted federal permission.

The concept of a federal commercial drone testing range was relatively new, so initially, Pendleton officials weren’t entirely sure how to proceed. Gradually, city leaders collected enough state and city money to build new hangers so visiting drone companies could test and tweak their vehicles in private.

The airport bought several mobile air-command centers too, so companies could drive out into the countryside to fly their drones over varied terrains, like canyons, forests, pastures and rivers. Most recently, with the help of a $3 million federal grant, the airport built a 100-acre industrial park with lightning-fast internet.

The result of all this work and spending: Pendleton has become one of the most popular of the federal government’s seven drone testing sites, with up to 1,000 take-offs or landings every month.

“They have a natural distinct advantage with their low-cost base,” he said, noting the price of doing business in Eastern Oregon is cheaper than in parts of the country that already have a booming tech scene, such as Texas.

Also, Eastern Oregon skies are not busy as those around some other test ranges.

“They have a great big range that nobody else can duplicate,” Springer said.

Pendleton offers 14,000 square miles of sky, and the altitude limit doesn’t kick in until 15,000 square feet. That’s a big slice of Northeastern Oregon skies, higher than Mount Rainier. The range runs from Boardman in the west to the Idaho border in the east and from the Columbia River in the north almost to John Day in the south.

“By negotiating with area wheat farmers and other landowners, we can spread operations out away from congestion, which provides some level of safety,” explained Cory Roeseler, with Hood Technology, which specializes in blade vibration and monitoring.

Chrisman said there’s another reason Pendleton is popular. The city’s mantra, “Let ‘er Buck,” fits well with fast-paced, high-tech businesses that don’t want to be tied down with red tape.

“So many of these test sites are operated by government entities, universities. Folks that maybe are more interested in printing research papers than they are in understanding what the customer wants,” Chrisman said.

What customers want, according to Chrisman, is to get to market quickly and safely. And Pendleton helps them do that.

During the last six years, the airport has hosted dozens of major tech organizations, including Airbus, Yamaha, NASA and Verizon.

Nine companies now lease space year-round; Yamaha is testing unmanned helicopters about the size of a small person. They can deliver herbicides directly onto an individual vine on a hillside. Company leaders think the drones might be more efficient and cheaper than traditional crop-dusting planes.

An Arizona-based company, Spright, is working on transporting medical tests between a health clinic and a laboratory via drones.

About 10% of drone activity at the Pendleton Unmanned Aircraft System Range is military. Those projects are secret. Chrisman said what’s important is that all these technologies are cutting-edge and the basis of what he calls a fourth industrial revolution.

“The world and Oregon would be very shocked if they knew the technology that’s right on the horizon. And we’re going to hopefully usher it in, right here through the Pendleton airport,” Chrisman said.

All the new activity at the drone range has been good for the local economy. Employment around the airport has jumped from 20 jobs to 200 over the last six years.

But the new workers are not doing traditional airport work like air traffic control, and the airport doesn’t offer any more commercial flights than before the drone boom. Instead, the new workers are drone pilots, engineers, entrepreneurs and software experts, all working for private companies on drone projects.

Those businesses are paying to lease hangers and to use the drone range, money that funnels back to local coffers. Airport revenues will amount to about $1.7 million dollars this financial year; that’s four-and-a-half times more than in 2016.

After years of operating in the red, the airport now makes a profit.

Drone activity is being felt in town, too. A brand new Radisson Hotel opens this spring, to provide accommodation for visiting drone pilots. One drone company booked the local Pendleton House Bed and Breakfast for two years solid.

Some of Pendleton’s construction companies have benefited. Joseph Hull, a vice president at McCormack Construction, said they have hired several dozen workers to build hangers during the last couple of years.

Pendleton’s car rental businesses are benefiting, and local restaurants such as the Oregon Grain Growers Brand Distillery have seen a substantial increase in diners. Not one Pendleton restaurant closed during the pandemic.

But the owner of Eden’s Kitchen, Kayla Henshaw, said while she’s seen a few extra customers, the bigger deal for her has been all the weird things in the sky. She lives out by the airport.

“I like to do motion lapses, time-lapses out my porch, of the sunset. And there’s this one that me and my husband to this day can’t figure out,” she said. “It looks almost like a spaceship or something.”

“It’s not a situation where you have manufacturers who are based in Umatilla County testing products,” Fridley said.

Stability is not growth

During the last 20 years, Umatilla County has had a remarkably stable economy with a level of 28,000 non-farm jobs. But that stability masks turmoil. For example, hundreds lost work when the Umatilla Chemical Weapons Depot near Hermiston closed. At around that same time, hundreds of others found work, as the nearby Wildhorse Resort & Casino on the Umatilla Indian Reservation expanded.

Twenty years of stability may be comfortable, but it’s not growth. Pendleton leaders would very much like to grow by attracting drone manufacturers. Fridley, the state economist, said he thinks the airport is on the right path.

“They are setting themselves up for the future by doing this, because we’re looking at the first phase of development in drone technology and who knows what it’s going to be like in 10 years,” he said.

Pendleton Mayor John Turner said he thinks that given time, some drone companies will start manufacturing locally. He points out that to start with, they only came to the airport for a week. Then they started to stay for a few months. Now many have a permanent presence and some are starting to bring-in parts to assemble.

“We think the next logical step would be manufacturing of some kind,” Turner said.

He said he thinks manufacturing in Pendleton makes sense because costs are lower than in places like Silicon Valley. The city has invested in the kind of infrastructure — state-of-the-art hangers, high-tech lathes, 3D printers and fast internet connectivity — necessary for more.

Springer, the retired Air Force colonel, agreed the airport has done a good job attracting businesses such as his. But he’s not sure attracting manufacturers is as simple as saying: “Build it and drones will come.”

“There has to be an investment in people capital, on top of the physical capital to really see a spike in employment,” Springer said.

Springer’s company trains dozens of people a year to maintain and fly drones that check power lines and survey farmland. They can start at $60,000 a year and make upwards of $150,000 over time

Springer said he believes there is a good chance some manufacturing will come to Pendleton, largely because the barriers to entry are low. For example, drones are small, relatively cheap and easy to design and manufacture. Plus there are a lot of inexpensive high-tech sensors and probes that can be attached.

Springer said he thinks the sector still is at the stage where a couple of people in a garage can break through. But there’s always one question companies ask before moving to an area: “What’s the local labor force?”

The city of Pendleton knows skilled labor is an issue and has taken steps to grow the supply. For example, Blue Mountain Community College now offers drone operator and maintenance courses, and Pendleton High School has a talented robotics team.

If Pendleton can increase its supply of drone experts, Springer said it doesn’t need to worry about competing with overseas labor, such as in China. That’s because national security concerns, overseas supply chain constraints, and intellectual property issues are now driving many Western companies to relocate manufacturing in the United States again, particularly in the high-tech sector.

The fact that Pendleton is a small rural town, isn’t a problem either, he said.

“Because aerospace is a fever,” Springer said. “Once you get it, you don’t get out, and you’ll go to about any place in the world to do something cool.”

There is one thing Pendleton needs that has yet to be built and that’s a drone incubation center, a place where garage tinkerers can share ideas and get advice from experts.

The airport has picked out a location for just such an incubation center, but it’s still trying to find the money.

In 2020, the airport received $16.8 million in CARES ACT funds from the Federal Aviation Administration to help recover from the effects of the pandemic. Pendleton used the money to improve airport infrastructure and build new hangars.

Meanwhile, unlike Pendleton, the skies above most American cities remain relatively drone-free. Federal Aviation Administration rules continue to restrict airspace. But those rules are constantly being updated as businesses push for new ways to fit drones into the economy. 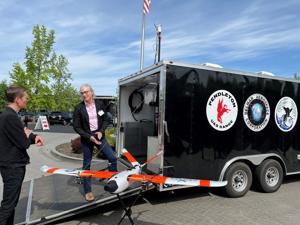