PENDLETON — The Pendleton Public Library opened its doors Saturday, Aug. 6, to what may be Eastern Oregon’s only comic con.

While it was not big or splashy, the local event drew a few dozen youths and adults in its second year and even expanded upon the inauguration in 2021 with a vendor section. Comic cons are not just about comic books — though those were in abundance at the event — but rather a celebration of geek culture, genre fiction and the merger of the two. The library’s modest event covered several bases, including a Magic the Gathering tournament and numerous participants in costumes. 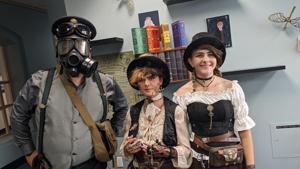