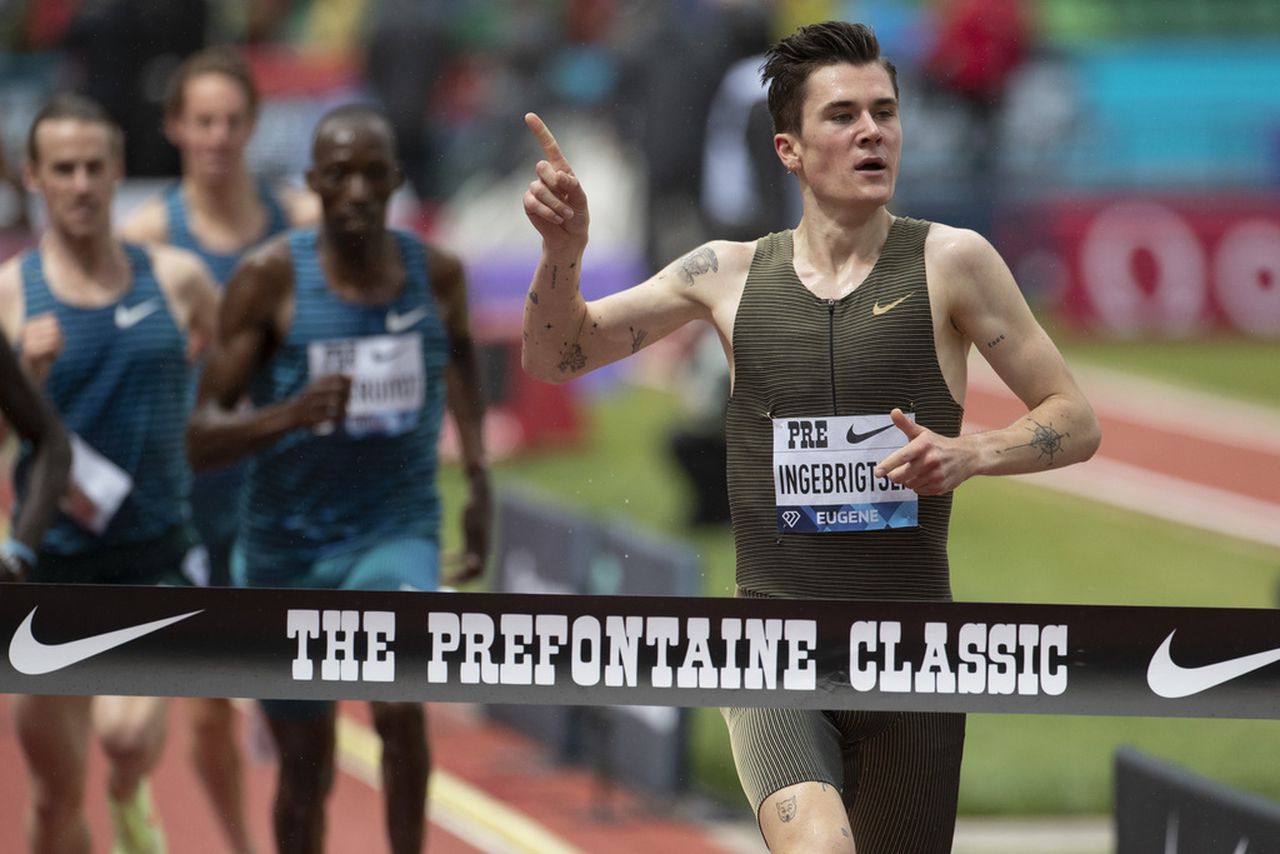 EUGENE — Michael Norman rocketed to victory Saturday in the men’s 400 meters, and Olympic champion Jakob Ingebrigtsen dominated the Bowerman Mile on a wet, breezy afternoon at the Prefontaine Classic.

Ingebrigtsen had his way in the mile, the meet’s signature race, opening a substantial gap on the field for the final two laps and holding it to the finish.

Ingebrigtsen crossed in 3:49.76. Australian Oliver Hoare, kicking hard on the outside, was second in 3:50.65. Timothy Cheruiyot, silver medalist at the Tokyo Olympics, finished in 3:50.77 for third.

Asked if he was disappointed no one went with him, Ingebrigtsen said, “You can’t be disappointed with people not being better.”

The conditions, complete with a swirling wind, had something to do with that — not that Norman noticed.

Norman said lots of hard work went into what he accomplished Saturday.

“I was like, ‘OK, go back to the basics,’” he said. “To me the basics are just hard work, consistency with diet and training.

There were other highlights. Jamaican sprint stars Elaine Thompson-Herah and Shelly-Ann Fraser-Pryce breezed to victory in the 100 and 200 respectively.

Thompson-Herah sped to a winning 100 time of 10.79. A hyped matchup with sprinter Sha’Carri Richardson failed to materialize.

Richardson won the 100 at last summer’s U.S. Olympic trials before being disqualified after testing positive for cannabis. She used a late surge Saturday to finish second in 10.92.

In the 200, Fraser-Pryce was seriously challenged by former University of Oregon star Jenna Prandini for most of the race. Fraser-Pryce’s winning time was 22.41. Prandini was with her until faltering in the final 10 meters and finishing fourth.

“I need some more training on execution toward the end to stay relaxed,” Prandini said. “It’s an easy fix. … A big focus has been the first 150. Obviously, I want to finish, but we’re on the right path.”

Two-time Olympic gold medalist Faith Kipyegon took down her own meet record in the women’s 1,500 while winning with a time of 3:52.59. Her record set last year had been 3:53.23. Second-place finisher Gudaf Tsegay was a second and a half behind.

Sinclaire Johnson and Jessica Hull of the Portland-based Union Athletics Club were fourth and fifth, respectively, Johnson in 3:58.85, a personal record by more than four seconds.

“I stayed on that rail as long as I could and ran a good time,” Johnson said. “It was perfect.”

In a race that began in the rain and finished in bright sunshine, Berihu Aregawi ran away from the field in the men’s 5,000, accelerating over the last half of the race to a winning time of 12:50.05.

As usual, there were plenty of subplots in the Bowerman Mile. Former UO runners Cole Hocker and Cooper Teare were fifth and sixth, respectively.

Hocker got blocked on the last lap’s home straight by Cheruiyot and Abel Kipsang in front of him, and Hoare coming around on the right. Teare got tangled up in the traffic on the back straight and couldn’t get himself free in time.

The pros dragged high schooler Colin Sahlman to a 13th-place time of 3:56.24.

Here are results from the Prefontaine Classic.

— Ken Goe for The Oregonian/OregonLive 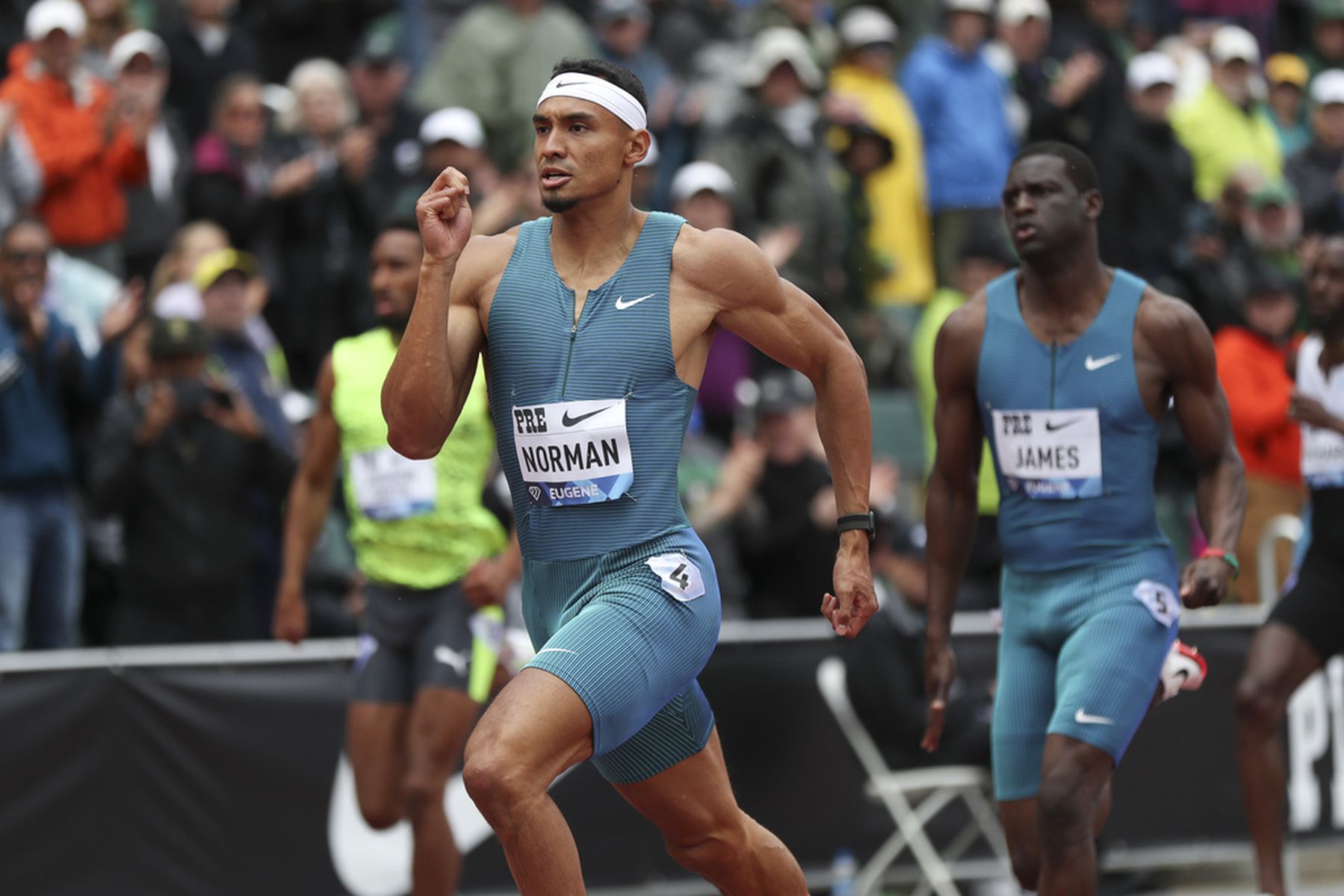