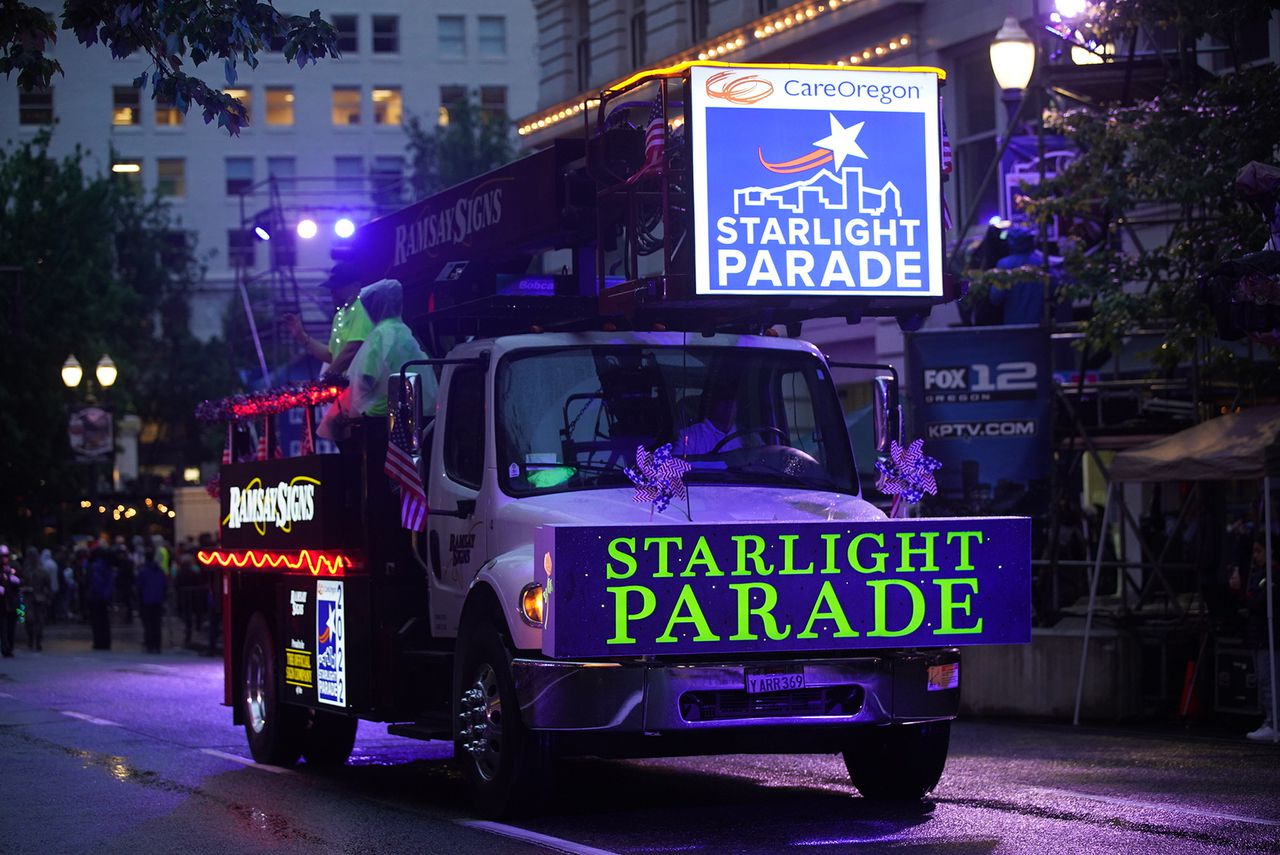 As Starlight Parade-goers waited for the festivities to begin, the mood was bright despite the gray sky and drizzle that grew into a light rain through the evening.

Sara Johnson’s been coming to the Starlight Parade since she was a kid, and her fond childhood memories are of picturesque sunsets on balmy summer nights. Was she disappointed about the precipitation?

Portland Rose Festival fans have had to make do with porch parades, a virtual Fleet Week, and a smattering of in-person events during the pandemic. But the festival returned this year for a Rose City Reunion with a full schedule of events, including the signature parades that started Saturday night with the CareOregon Starlight Parade and 5K Starlight Run in downtown Portland.

It marked the beginning of a jam-packed week of events, with the Junior Parade on Wednesday, June 8, and the Grand Floral Parade on Saturday, June 11. See The Oregonian/OregonLive’s complete guide to the 2022 Portland Rose Festival for details.

One of the Rose Festival’s most popular events, the Starlight was Portland’s first big parade in three years. The COVID-induced absence was felt keenly by Portlanders.

When Starlight was canceled the past two years, “It was really, really disappointing,” said Micah Cooper. If not for the pandemic, the 21-year-old would have watched the Starlight Parade every year of his life. “I was going to college in Alabama, and I’d come back just for this week to see the parade.”

Nafisaria Mathews, a lifelong Portland resident and mother of five, regularly attended the parade growing up — and started coming back once she had children of her own. “COVID was terrible. I felt like my two youngest kids didn’t even know the experience of the parade,” she said. “So I was like, I don’t care if it’s raining, I’m bringing my kids!”

Soon, the parade was in full swing. Bands marched and played triumphantly as the audience cheered. Newport Pride Marching Band’s rousing performance of Walk the Moon’s “Shut Up and Dance” had the crowd clapping along. As night fell, lit-up floats dazzled all who watched.

Not every attendee was a lifelong fan. Ayah Al-Hashim, a 14-year-old who used her iPhone to enthusiastically record almost every float, ended up at the parade by coincidence. Her parents had taken her to dinner at Ruth’s Chris Steak House, which falls along the parade route.

“Now that we’re here, we will absolutely come back in the future,” said her father, Tareq Al-Hashim, who has spent over a quarter century in Portland. “We’ll make it a tradition.”

Andrew Johnson and Jake Petersen have attended in the past but stumbled on this year’s parade while walking their dogs, Baker and Igloo. Baker, a chorkie (chihuahua-yorkie mix), was one of the only spectators who looked displeased. “He didn’t realize our walk was going to be this long,” Petersen said.

Unlike Baker, Johnson and Petersen didn’t mind the weather. Petersen asked, “What is more Portland-y than watching the parade in the rain at night?”

He said his favorite part of Starlight is the community coming together. “It’s really cool to see all the different people — different segments of every part of our city.”

That’s Cooper’s favorite, too. He and his father arrive about 10:30 a.m. each year to mark their spot for the parade. And because they spend all day and night there, “We’ve built relationships with everybody who comes around the same area. It’s really good to see all of the familiar faces.”

The best part: the Coopers never even use their hard-earned spot. “We’d rather give it to the little kids, so they can see.”

And what is more Portland-y than that? 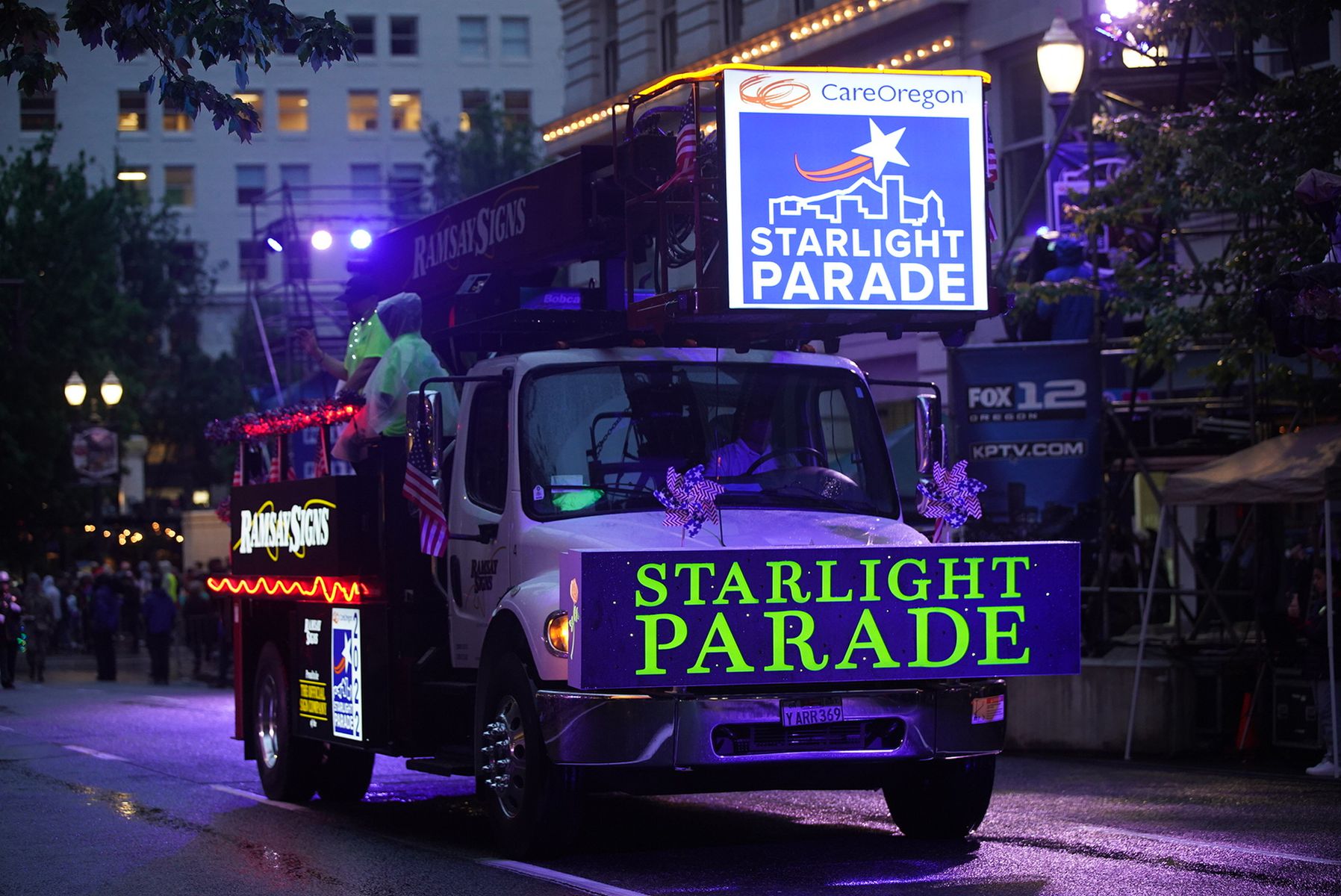