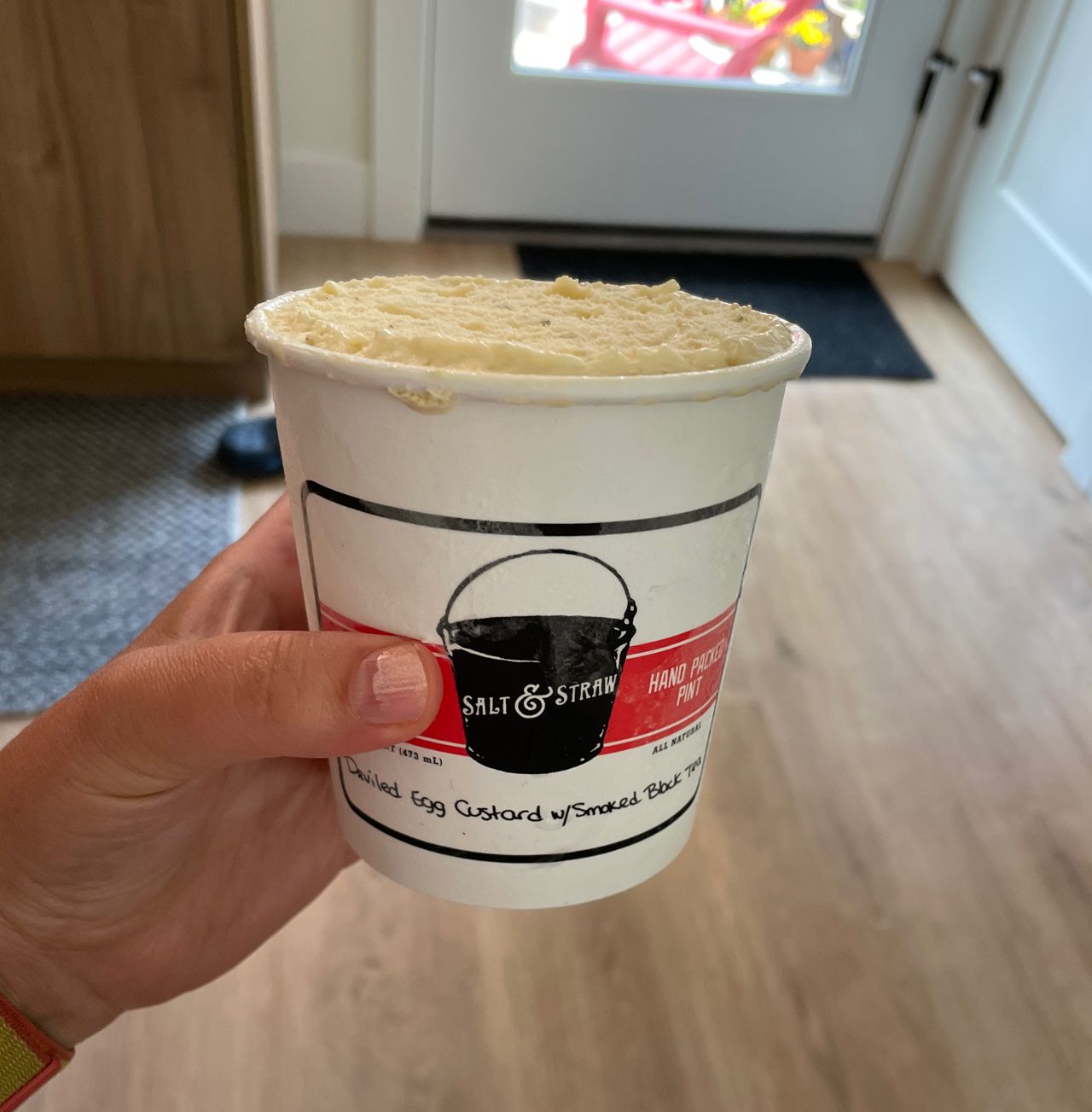 Salt and Straw’s newest monthly flavors are like a summer picnic, extra melty.

The flavors, which will be available this month at all their scoop shops and online, are meant to evoke a sunny afternoon on a blanket among some wildflowers perhaps, and at least one of them is a year in the making.

That’s the Cinnamon and Honey Fried Chicken, which is a collaboration between Ezell’s Fried Chicken cofounder Lewis Rudd and Salt and Straw cofounder Tyler Malek.

Malek and Rudd tried at least 23 versions of the fried chicken ice cream before they settled on the one behind the glass now.

“The ultimate and really the only main course you should be eating at a picnic is fried chicken,” said Malek on Monday morning in Salt and Straw’s shop on Northwest 23rd Avenue, where he and Rudd met to talk about this season’s wild flavors.

“The evolution was good,” Rudd said. “The final product is really, really good.”

Ezell’s and Salt and Straw have a lot in common – both businesses are family-run, and based in the Pacific Northwest.

The ice cream they created together is sure to make people happy, even if some might be a little worried about ordering an ice cream flavor with the word “chicken” in it.

To get you prepared for your visit to Salt and Straw, we decided to rank June’s seasonal flavors. And if you can’t decide, luckily, you can just order a flight.

I have tasted Salt and Straw’s version of a Thanksgiving dinner, so I know they aren’t afraid to make ice cream that tastes literally like mashed potatoes.

For this selection of flavors, Deviled Egg Custard comes in last, not because I don’t like this flavor, more because I am not sure yet if I like it. The strong smoky tea is a variety related to Lapsang souchong that comes from Portland’s Steven Smith, of course, and that flavor is always both alluring and a little off-putting. Do I like it or not? I always get to the end of the cup and still haven’t quite made up my mind.

On the plus, or possibly minus side, this ice cream does look exactly like a deviled egg. Still, the jury is out. I’ll probably need to eat a whole pint to decide how I feel about it.

This vegan option is hyper-sweet and so watermelon-y. The rosé is from Sokol Blosser Winery in Dayton and the watermelons are from Hermiston and together they make a pink, ice-y treat that is good but just can’t hold pace with the texture of some of the other options.

Originally, this delicate mix of cherries and chocolate with the texture of pie crust for good measure was on top of my list. It has everything I love – chocolate, fruit, brandy and a cookie or cake-type thing to hunt around for in each bite.

The nocino is made by Stone Barn Brandyworks in Portland and gives the ice cream a little bit of an edge.

On my second taste through, I still loved this flavor and would probably order a scoop, but I would also definitely add another scoop of one of the top two.

After 20-some tries, they got it right.

Warm cinnamon, little tasty bits of deep friend croissant give the fried chicken vibe without actual piece of chicken, which let’s be honest, would be very distracting. (Don’t worry, the croissant is deep fried in chicken fat.)

This one also has a little bit of a kick at the end from the cayenne that mirrors the kick you get when you take a bite out of Ezell’s spicy chicken.

Here the sweet fig mixes with the Cowgirl Creamery cheese for a perfect dessert cheese plate taste. What sets this flavor apart has to be the texture – the figs and their particular figgyness and the little crumbles of cheesecake crust made out of Ritz crackers.

Malek likes that juxtaposition, using what he called, “the most expensive cheese on the West Coast” and possibly the most recognizable crackers in America.

And he was right. 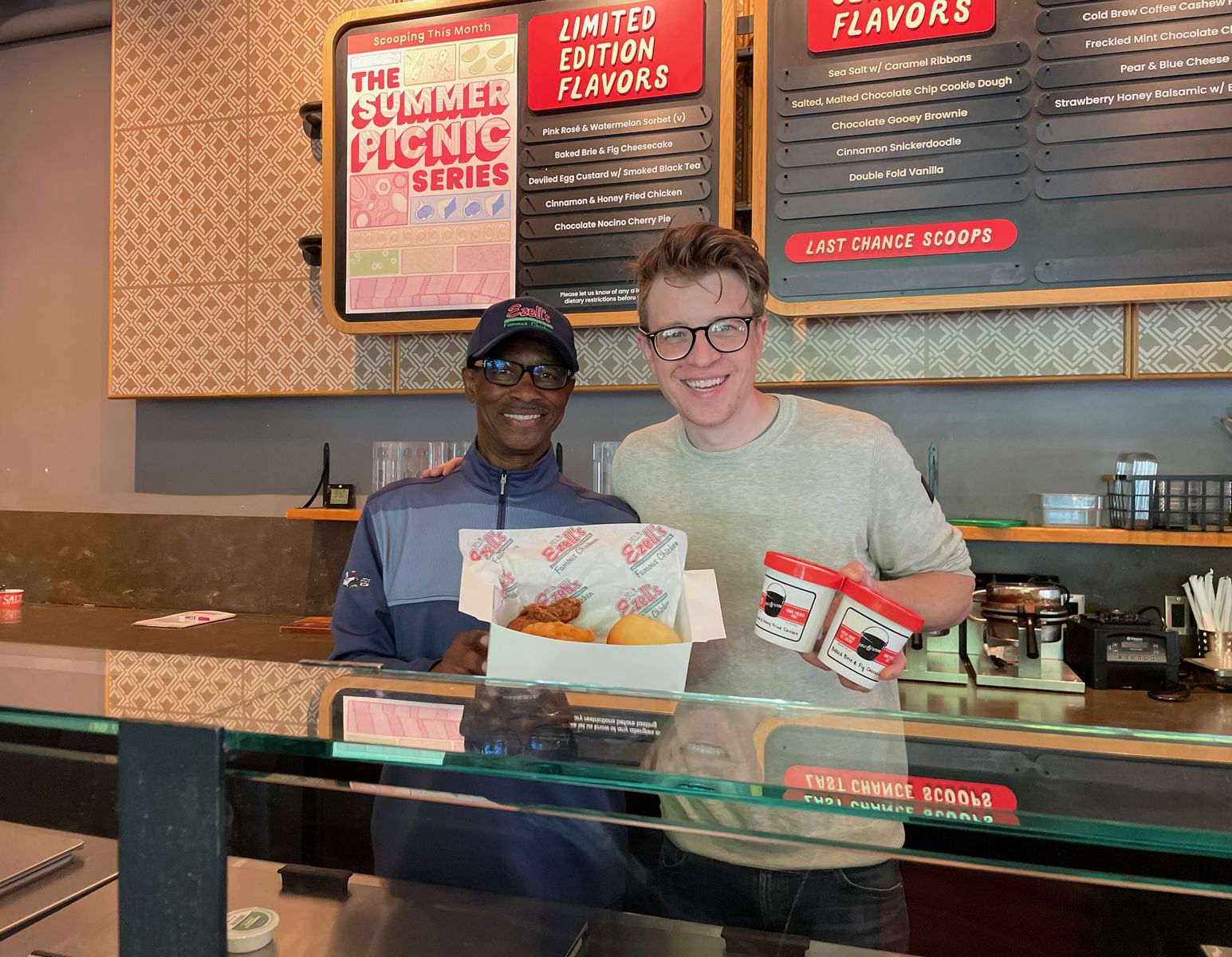