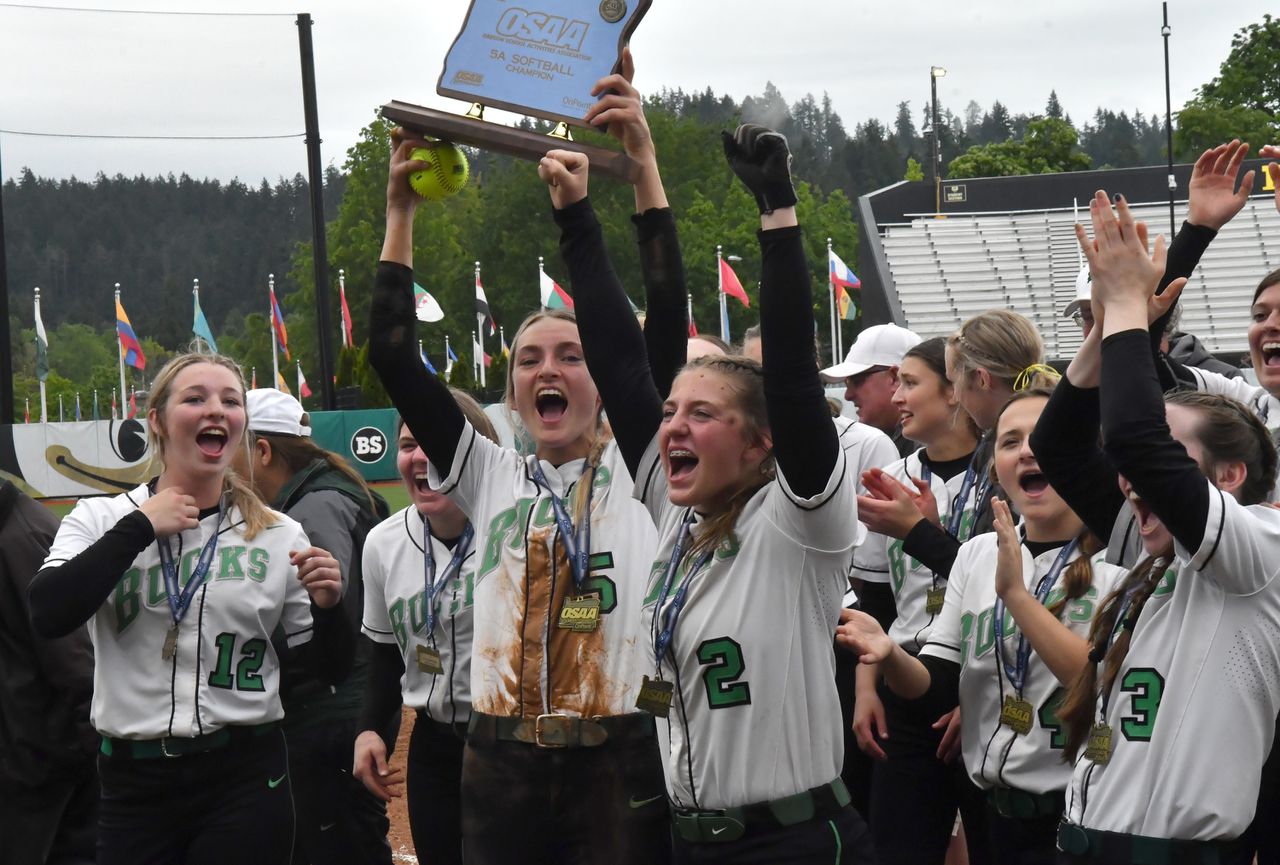 EUGENE — Despite the damp conditions and a cloudy sky overhanging the field, players from Wilsonville and Pendleton/Griswold got to compete in the 5A softball championship game at Jane Sanders Stadium Saturday.

It was all about the Buckaroos, though, as pitcher Sauren Garton struck out 17 and brought a no-hitter to the seventh inning. The victory sealed Pendleton/Griswold’s fourth state championship win in the last 10 years.

“I’ve been waiting for this day my whole life,” Garton said. “This is literally a dream come true… It’s awesome to be here. It’s such a cool stadium. I wouldn’t have it any other way.”

Wildcats pitcher Madison Erickson, who also batted in the leadoff spot, reached on an error by the center fielder to start the game. It didn’t phase Garton, who recorded a pair of strikeouts to strand Erickson on third.

Erickson, coming off a no-hitter in the semifinal, threw a perfect first inning. She gave up a leadoff single in the bottom of the second — the first hit for either team — but she punched out two more to keep it scoreless.

After striking out four in a row, Garton walked Talia Valdez to lead off the third. Valdez advanced to second on a wild pitch, and the Buckaroos intentionally walked Erickson. A sacrifice bunt moved the runners into scoring position, but Garton got out of the jam with her seventh strikeout.

Erickson got into a jam of her own in the bottom of the third. A single and a pair of walks loaded the bases for Pendleton/Griswold with one out. The Wildcats recorded a critical force out at the plate, and a lineout to right field squeezed them out of trouble. Right fielder Calli Weaving fell to her knees and raised her fists as she caught the final out.

Erickson wasn’t so fortunate in the fifth inning. She struck out the first two batters, but Josie Jenness singled and advanced to second on an error by the left fielder. Her sister Daisy Jenness doubled, bringing across the first run of the day.

“I was a little nervous,” Daisy said. “But I was just like, ‘You know what? I’m just gonna put the ball in play, and my sister better be sprinting to home.’”

Gifted with a 1-0 lead, Garton kept rolling. She issued two walks in the fifth — including another intentional pass to Erickson — but otherwise struck out the side. She struck out two more in a perfect sixth inning, racking her strikeout total up to 14.

The Buckaroos added another run in the sixth on a routine fly ball that Weaving dropped. A rundown prevented any further damage, but Pendleton/Griswold extended its lead to 2-0.

With one out in the top of the seventh, Neina-Leilani Santer scratched out on an infield single for Wilsonville’s first hit of the day. Garton still managed to finish out the game in dominant fashion, completing a one-hit shutout with a whopping 17 strikeouts.

“I’ve been catching Sauren since third grade, ever since we were little,” catcher Brie Youncs said. “We’ve won a lot of games together. Being able to get that last strikeout with her and helping her has been so amazing, and I’m so glad I got to have that chance with her.”

The game ended with the vaunted Erickson waiting on deck.

“I would have loved to pitch to her again,” Garton said. “I didn’t know she was on deck, but I was just working at the plate.”

Pendleton/Griswold finishes its season with a 28-2 record, while Wilsonville falls to 27-4. A graduation ceremony for the seniors followed the game at the University of Oregon’s home field.

“It means a lot,” Youncs said. “This is a super nice stadium. It’s a dream of all of ours. Since we were in third grade, we’ve always thought about this. It’s so cool that we finally got to have that dream and graduate on the field.” 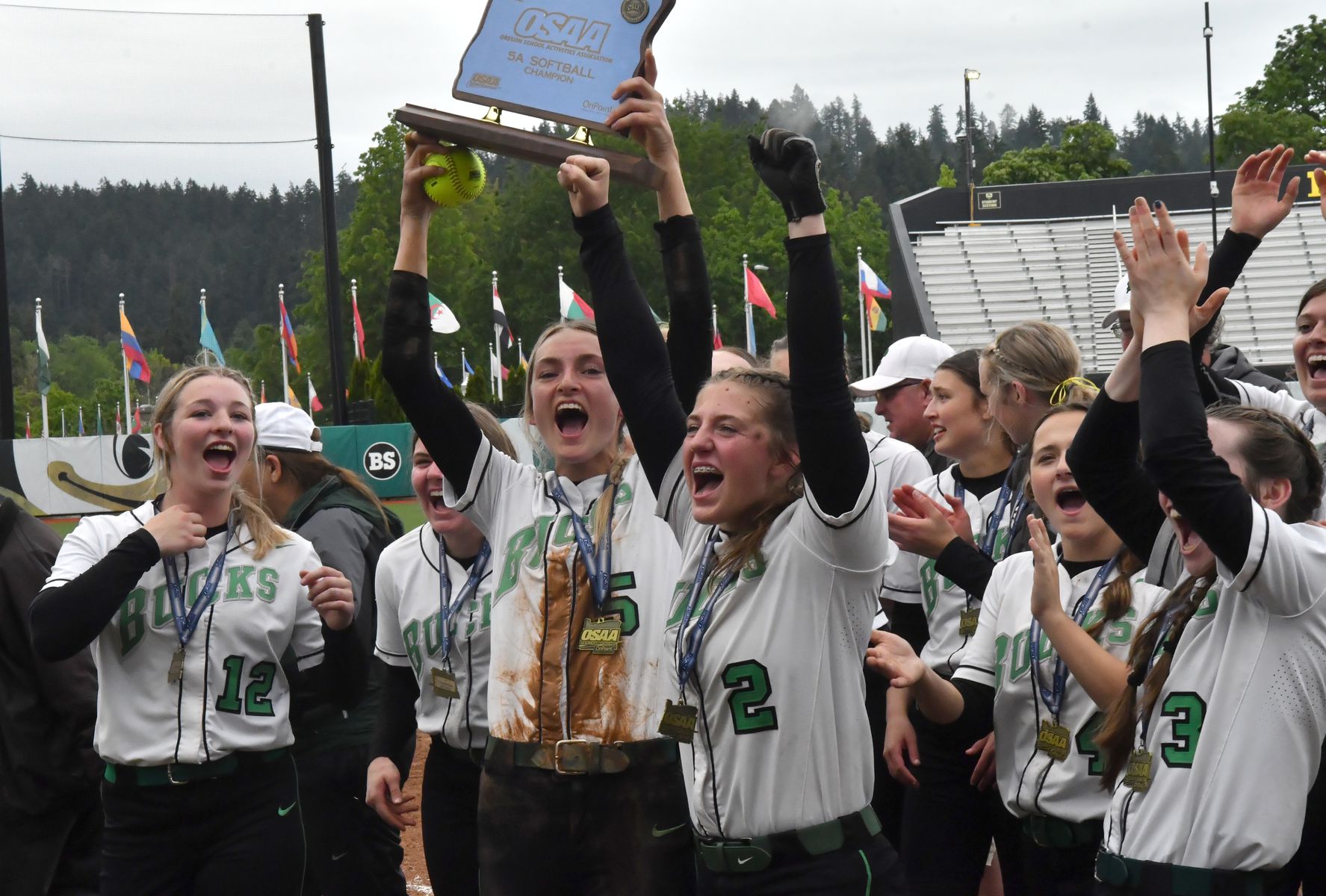