Interested in making your own Greek yogurt from raw milk? Well here is a recipe so easy that the yogurt practically makes itself! I have spent a lot of time feeling discouraged by rather involved yogurt recipes. This is not one of them. Here is a list of things you will NOT need:

a yogurt maker
a cheese thermometer
a special yogurt culture 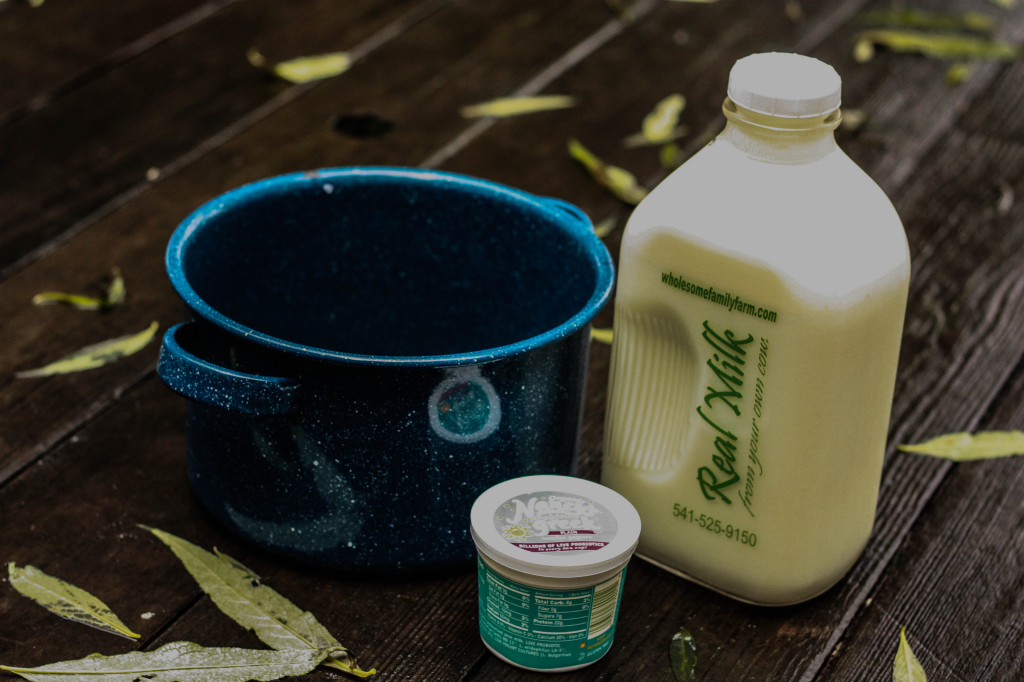 This is box title
INGREDIENTS

3. Warm the milk over the stove till it reaches about 100 degrees Fahrenheit.  You can heat it up higher, but you run the risk of pasteurizing the milk. I don’t know about you, but I am not interested in eating pasteurized yogurt. Read more about the health risks associated with pasteurized dairy here.

9.There are two methods for the next step.

Option A – If you have an oven with a pilot light, you are lucky! Place the yogurt in your oven, without turning the heat on, for 10 – 15 hours, depending on how thick you want your yogurt.

Option B – This method is more involved but it works, if you don’t have an oven with a pilot light, or if you are planning to bake or cook on the stove top in the next 10 -15 hours. One of my dearest friends taught me this method. Thank you Nancy!

If you would like your yogurt to be really firm and creamy, change the water out with some more hot water after 5-6 hours. If the yogurt turns out kind of chunky but slightly runny at the same time, it will still taste delicious, but that means that it wasn’t warm enough.

I have found that the smoothest Greek yogurt I have gotten is by using Option A above, in the oven with a pilot light. Using Option B, you have to pay close attention to make sure your water doesn’t get too cool. Test it with your pinky. If it feels warm, the cultures are thriving. If it’s lukewarm, add hot water.

After fifteen hours of anticipation, there it is. Delicious, creamy Greek Yogurt. This time, with frozen blueberries and cinnamon. Recently, I have been taking it to work with me and mixing it with raw honey. It is perfect for snacks or breakfast on the run! Enjoy!

This was originally published in my blog: The Kitchen Rag: http://kitchen-rag.blogspot.com/

Coming to Valley River Center in mid July, YoMyMy Frozen You-gurt is the newest brainchild of brothers Jim and Phil West. The brothers, collectively known as Westraunt Concepts, have been in business since 1992. Beginning with the full-service establishment West Bros’ BBQ in Eugene, they soon switched courses and jettisoned their wait staffs. Moving in the direction of “fast casual” restaurants, they created Mucho Gusto in 2001—the beginning of a new era. Mucho Gusto, with its many options and create-it-yourself spirit, began the unique emphasis on guest participation that has made the Westraunt Concepts so popular.

After Mucho Gusto in 2001, Fina Taqueria in 2006, and DickieJo’s in 2009, the brothers have now set their sights on dessert. “We are always looking for the next big thing, and how best to use our properties,” Jim West explained. Since self-serve frozen yogurt was the #1 hottest trend in the food industry last year, Westraunt had to jump on board. They packed up their Mucho Gusto at Valley River (sending all their equipment up north for their first Portland Mucho Gusto), and are preparing to serve up their version of the hottest food trend of the year.

The idea is simple: You grab either a 16 or 32 oz. cup, add your yogurt(s) or sorbet(s) of choice, help yourself to whatever toppings and sauces you want, and then pay 44 cents per ounce. Like other Westraunt concepts, YoMyMy is powered by choice. It’s all about you and letting you create a dessert that fits your taste buds, diet, etc. With at least 12 different flavors a day, gluten, dairy, and sugar free options, toppings ranging from cookies to fresh fruit to candy, you will be hard pressed not to walk out satisfied.

“With crazy varieties and flavors all centered on healthy probiotic yogurt from Portland-based YoCream,” Jim said, “we are giving customers health and choice.” And everything will be fresh and toppings rotated. “You won’t be biting into a stale piece of licorice.”

Jim isn’t the least bit worried about the competition. “It’s a totally different product than Prince Puckler’s and Coldstone.” Not to mention yogurt is much lower in fat and sugar. Whereas ice cream must technically be at least 10% butter fat (and Coldstone is 14%, Jim says!), frozen yogurt is 0-3% fat. Add to that some dairy, gluten, and sugar free options, and you can see why Jim says, “Frozen yogurt is the perception of healthiness. It’s probiotic, it cleans your colon, and it tastes great.”

But while YoMyMy can claim it is healthier than ice cream shops, it cannot claim to be the only yogurt shop in town. There’s Vanilla Jill’s on Coburg, Yogurt Central on Alder, and Yogurt Extreme on 13th. The last two offer an entirely self-serve experience similar to YoMyMy. Yet instead of battling it out, they all seem happy to have each other around.

In operation since last winter, Yogurt Extreme is owned by two local sisters. Their shop has row after row of toppings–candies, fruit, sauces. Much like what the West brothers have in mind — but with so many more options it’s a bit overwhelming — the sisters’ concept has been a hit. And the store welcomes the competition. “I don’t think we’re worried,” one employee said. “Competition is good.” Jim agreed, but humorously added, “There’s no parking near campus. So our geography is ideal.”

When asked about the possibility of other YoMyMys, Jim was positive but not eager. “We don’t foresee this being a chain in the future, at least not as a stand-alone. But we could see it attached to other restaurants,” he said. “It’s so simple, and needs little management,” which to Jim means it works best when the manager of the adjacent restaurant can oversee both places, thereby cutting down on management expenses.

YoMyMy will be open in the middle of July. It is located at 1079 Valley River Way, Eugene, OR 97401. For more information on Westraunt Concepts you can visit visit their website at http://westrauntconcepts.com/.

Eugene Food Scene: Yummy in The Tummy, Good For The Soul