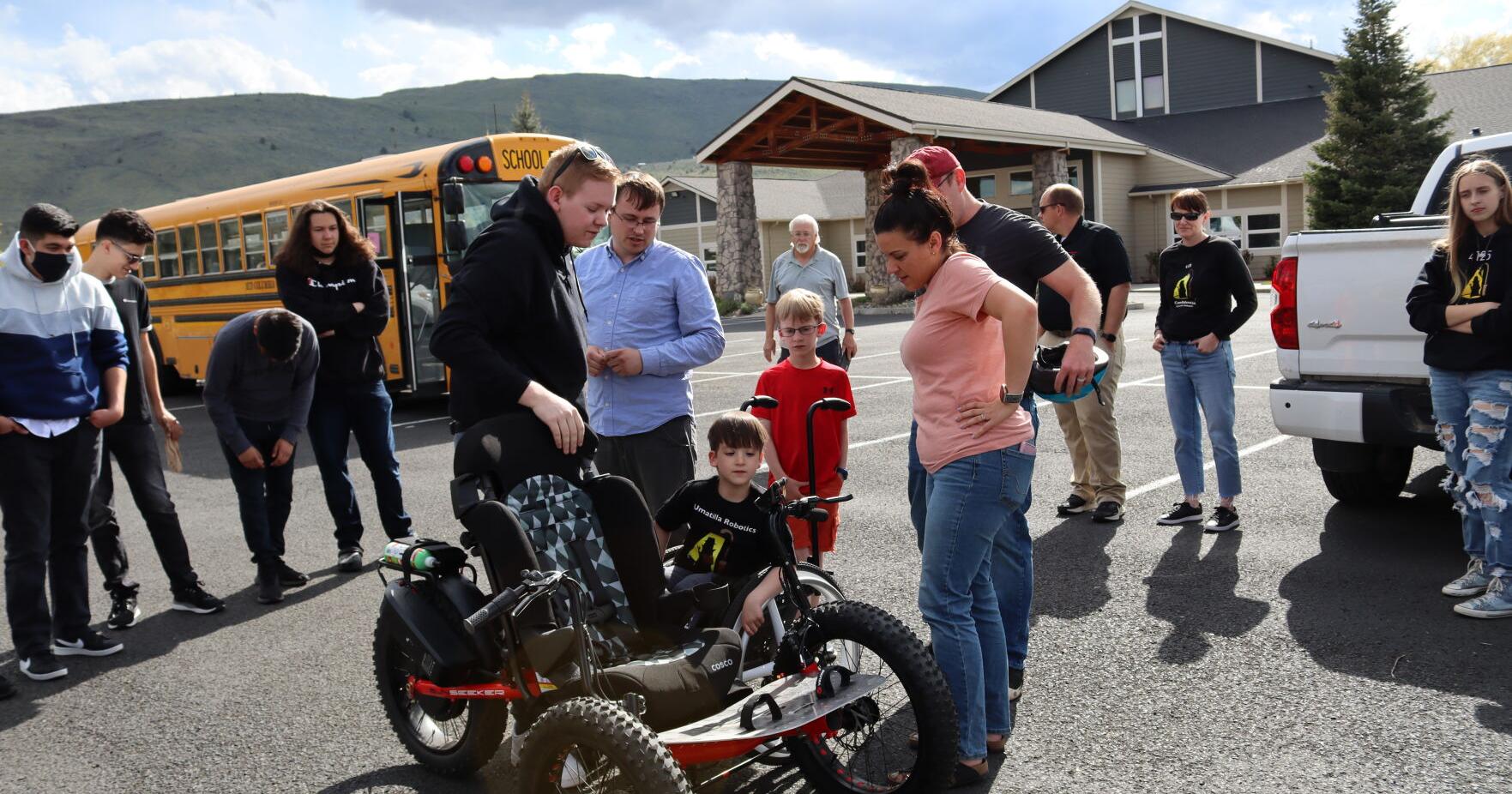 UMATILLA — Gus Macy, son of Levi and Karla of Baker City, is set for a very enjoyable summer, according to his mother. Team Confidential, the Umatilla High School robotics team, is responsible for some of his latest summertime plans.

Students constructed a wheelchair that, according to the team’s coach and UHS teacher, Kyle Sipe, is more than a typical chair. This chair was made specifically for 6-year-old Gus, who has spina bifida and is unable to use his legs.

“What we determined to do as a robotics club is to give him a chance to have more activities with his family outside of normal wheelchair activity,” the coach said.

He described it as a “trike, retrofitted into an e-bike.” It’s powered by electricity, so Gus, who cannot operate a regular bike, can use it. He can use his thumb to control the throttle.

“This is a new and exciting way for him to get around,” she said.

Kyle Sipe said that this was not only a big project for his students; it was a meaningful one. Students planned its construction during the COVID-19 lockdown of 2020/21. When they couldn’t see one another in person, they diagrammed the chair remotely.

Students conversed with each other via the internet about the build. This gave them something to do and to look forward to, their teacher said. Also, it provided a reason for them to keep in touch.

When lockdown ended, they got together and enjoyed teaming up once again, as they had done with other projects. At least 35 students pitched in on this project, working whenever they had a free moment.

“I couldn’t hazard a guess as to how many hours they spent, but it was a lot,” Kyle Sipe said.

He and his students weren’t the only people responsible for this new chair, however.

The dynamic duo and super students

Heidi Sipe, Umatilla School superintendent and wife to the robotics teacher, also worked to make this gift possible. She said their effort was like other work they have done in the past.

“I always do the organizing and financing piece, and Kyle makes the real work happen,” she said.

The superintendent said she discovered this need while at a legislative meeting. Gus’ mom was a speaker at the meeting, as she was advocating as an early childhood intervention educator.

“I met her there and was really inspired by her,” Heidi Sipe said.

They stayed in touch after the meeting, and they discussed the possibility of the Umatilla robotics team helping Gus.

The robotics team is often busy, but their schedule opened up during the pandemic. There was no in-person school, and competitions were canceled.

“The kids needed a project,” she said.

Also, local companies and people were willing to fund the project. Cattle Drive Leather Co. was the primary sponsor.

The Lorence Family and Evangeline Gifts were sponsors, too, and Amazon Web Services helped fund the team’s trip to Baker City to deliver the bike to Gus.

She called the experience of delivering the chair, and seeing the surprise on Gus’ face, “the greatest thing ever.” Some of the students, who worked on the chair, agreed.

Avery Gutierrez, Confidential officer and member for three years,” said she was very happy about this project. She added that the robotics team has introduced her to community service; Gutierrez hadn’t done such work previous to joining Confidential. Lately, she has performed yard work and helped out in other ways with her team.

She said she likes this sort of work, as it brings her closer to others. Also, she enjoys learning new skills, she said. Though the wheelchair project is not robotics, per se, it did involve wiring and other skills.

“We started by getting measurements — his height and weight — and we worked to adjust it to his needs,” Gutierrez said.

According to Gutierrez, Gus hugged his mom and gave everyone on the team high fives upon receiving the chair.

Meghan Owens, lead of programming and electrical for Confidential, has been with the team for four years. Like Gutierrez, most of her community service work has been through her robotics team, she said.

Also like Gutierrez, Owens said she “gets a lot” from her service.

“We get really connected with our community,” she said. She added that she has learned much about the people of her community, as well as the area’s history, businesses and services.

She also said that Gus was happy about the chair, even though he had an accident on his first drive.

Adventures started with a spill

Karla Macy confirmed that her son did, in fact, have an accident, though it was minor and not enough to scare him away from the gift. Upon receiving the wheelchair, Gus steered it into a curb and took a tumble.

“It only took him about five minutes to figure out how to tip it over,” she said.

She said Gus was fine, as the chair was built with safety in mind. A car seat, with a five-point harness, is part of the wheelchair. Also, he has a helmet.

“What’s really good about it is that it’s a pretty good size, and I think it’s something he can use,” she said. “I think this is something that can last him his whole life, with some minor adjustments.”

Gus’ mother expressed much gratitude for the chair and the kindness of the robotics team.

According to Karla Macy, they spoke with him when designing the chair. Later, when they met him in person, one student presented him with a stuffed toy.

“Those students from Umatilla have been so awesome,” she said. 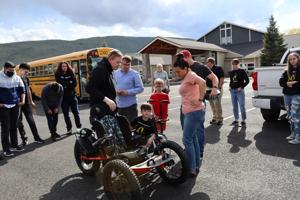