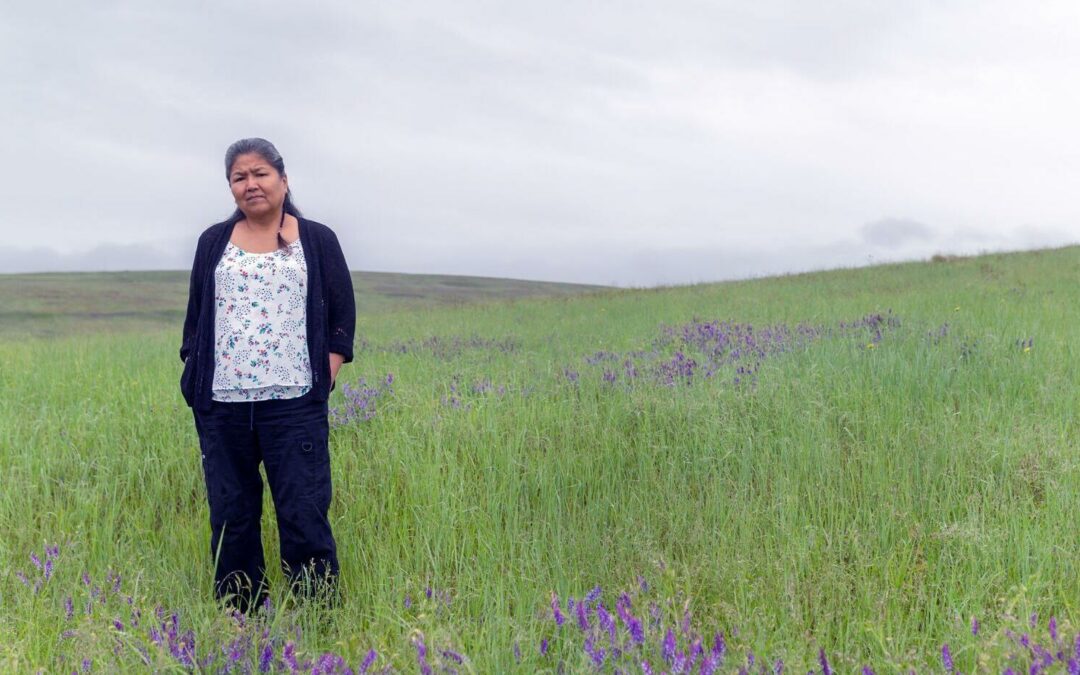 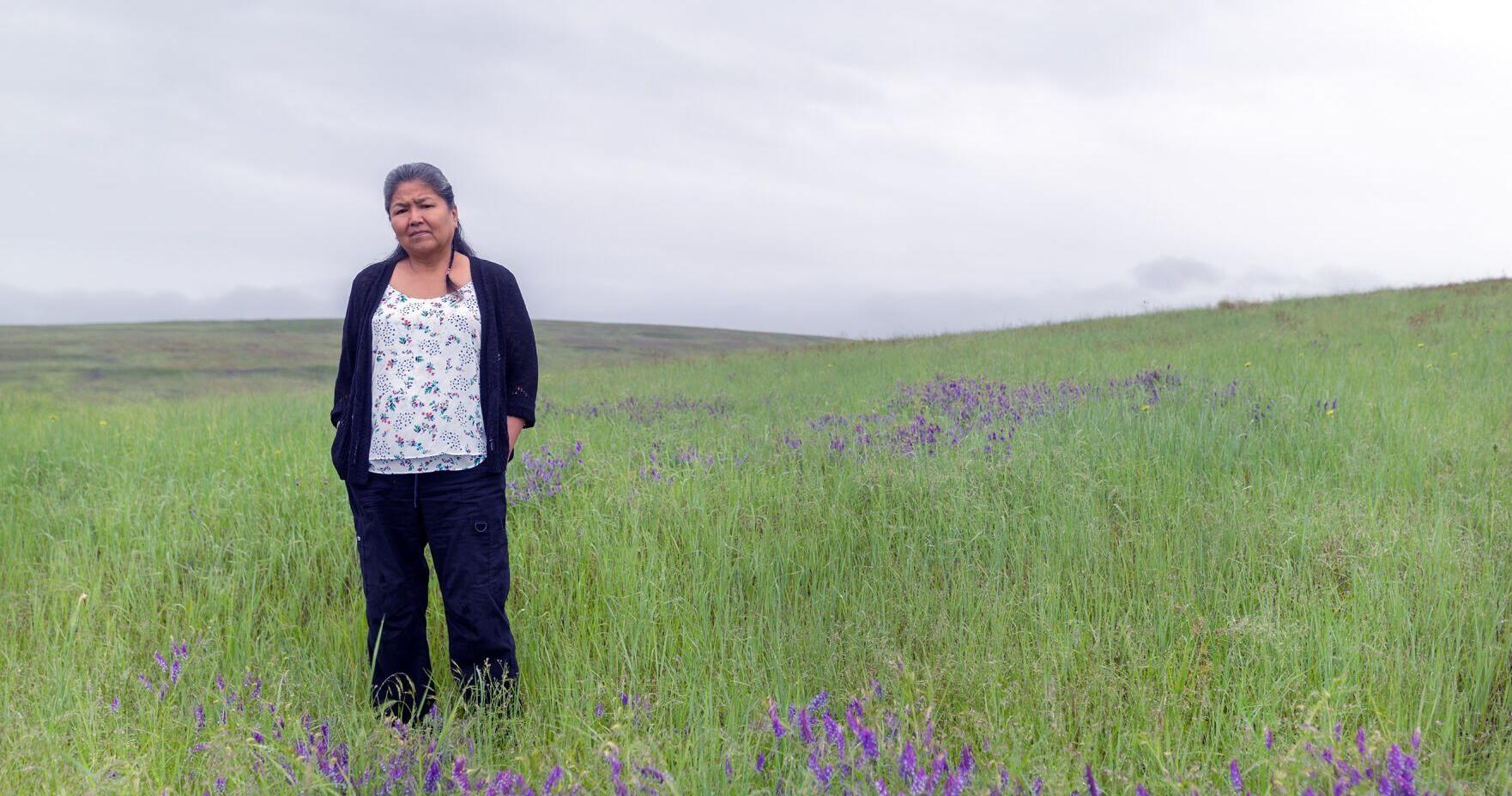 MISSION — Desireé Coyote endured struggles at nearly every turn in her life that so many Indigenous women in Oregon have faced. It could have led her to ruin. She refused to let that happen.

Her determination and strength to find her voice, and help others find theirs have served as an inspiration. Coyote’s story, told through hours of interviews and documents, reveals how years of trauma and systemic failures drove her to fight for survivors like her. To understand it, you have to go back to the beginning.

Coyote grew up in Sweetwater, a single-block, unincorporated town on the Nez Perce Reservation in North Idaho. The family moved into a two-story home there when Coyote was 3 years old, and when she and her nine siblings arrived, the children were thrilled to see a swing set and merry-go-round in the backyard.

In school, a 2-mile walk away, Coyote took up softball and wrestled on the boy’s team.

“Not that I could compete,” she said, “but I could practice with them.”

Though Sweetwater was on reservation land, Coyote recalled seeing few Native Americans like her around town. She grew up learning little of the customs, traditions or ceremonies of her people. Her father, Clifford Allen Sr., a handsome war veteran of many trades, worked under Idaho Gov. Cecil Andrus. As a member of a state-run committee on education, his focus was revamping education around tribal nations in Idaho, Coyote said. But during childhood, he taught her: “It’s a white man’s world, you gotta learn the white man’s ways,” she said.

Her father eventually started a relationship with Coyote’s aunt. When Coyote was 3, her aunt became her abuser, she said. When Coyote was 7, her father kicked her mother out of the house. It would be nearly a decade before Coyote would see her mom again.

Meanwhile, Coyote’s relationship with her aunt soured. To avoid her, Coyote began doing her chores early in the morning and would stay at school late after athletics.

“It wasn’t safe for me at home, with her,” Coyote said.

One day when Coyote was 10, her aunt stormed into her room, furious that she had found blood in the bathroom. She accused Coyote of being on her period and scolded her for making a mess. Coyote replied it wasn’t her. She began hitting, punching, slapping and pushing Coyote. For the first time, Coyote fought back. Then, Coyote’s older sister jumped off their bunk bed and “got involved.” They never fought again.

When the abuse from her aunt ended, her dad returned from a work trip. For the first time, he hit her. She was surprised, and the abuse escalated quickly. One day, he thrust her head into a wall, scraping her scalp against a nail, creating a scar that remains on the back of her head.

Coyote was home less than a month before deciding to leave again.

Coyote packed a bag and joined her friends on a backpacking trip across the Pacific Northwest, visiting Portland, Salem, Yakima and Seattle. She began to think of her mother, wondering where she was. About a decade had passed since she had last seen her, just like dad had wanted. Coyote knew her mother had grown up on the Umatilla Indian Reservation, so that’s where she found her.

Coyote lived with her mother for six or seven months, but life even there wasn’t safe. Her mother struggled with alcoholism and threw parties full of scary men who would break into her room. Without much of an education to lean on, she decided, at 16, to join the military. Her mother was by her side when she signed the papers.

The bulk of Coyote’s service occurred at Fort Riley in Kansas, where she worked in communications. It was here that she met an infantryman from New York, with whom she bonded over daily runs around the base. His name was William Cruz. The two started dating, and when Coyote left the military, they moved into a home in Kansas, where they remained for three years. She took care of their two children as Cruz’s service moved them from Kansas to Germany to New York and back to Kansas.

Early on, Coyote said she began to notice the “manipulation and coercion that forms a tight rope around the leg.” At first, the signs were subtle. A devout Christian, Cruz only allowed Coyote to listen to Christian music and watch Christian television. She was not allowed to leave the house unless she was going to church. “Being a good Christian woman, I did what I was told,” she said.

“Everybody thinks that domestic abuse is a physical thing,” she said. “It’s not … when they take who you are away, piece by piece, when they dehumanize you, make like you’re less than — that’s when it all begins.”

Cruz and Coyote arrived in Oregon with their four children in 1983, moving into a home on the Umatilla Indian Reservation near Pendleton. Cruz became a leader at three local churches while working as a student mechanic at Blue Mountain Community College. Coyote worked as a secretary for economic development for the tribe and attended the community college.

On the outside, he appeared as a polite husband, walking Coyote to class and taking her to lunch. But life at home was a different story.

“For me, as well as all victims, what we’re going to remember is all the holes in the walls, the holes or dents in the doors, because they know not to hit you physically,” she said.

But the emotional abuse turned into physical violence, she said. She sometimes called the police two or three times a week, but officers seldom responded. She couldn’t take it anymore. She divorced Cruz in 1990 and promptly obtained a restraining order. He moved out.

Coyote’s nightmare didn’t end there. She would walk outside to her car and find her tires punctured and parts dismantled, and because Cruz was a mechanic, she assumed it was him. For months, she and her five children stayed in a single room in the four-bedroom house, sleeping stacked against the windows and door, hoping to feel the slightest breeze in case he broke in.

Soon enough, Coyote’s life appeared to be improving. Her mother had moved in, and Coyote was helping her get sober. She had taken a job with the forest service in nearby Walla Walla and began going on dates with a coworker there.

“It was the first time I’d been happy in I don’t know how long,” she said.

Her account of that night was documented in a tribal police report. Cruz declined to be interviewed for this story.

After the alleged assault by her ex-husband on the Umatilla Indian Reservation, Coyote feared for her life and was contemplating suicide. About a year later, Cruz was sentenced to federal prison for child sexual abuse. Coyote moved with her five children to New Mexico, where she lived for around three years before moving back to Oregon.

In 1995, she began her work in domestic violence services and advocacy while living in Lakeview. It didn’t pay well. It offered no retirement or medical benefits. Meanwhile, her kids were facing racial harassment in school. And even though Cruz was in prison, Coyote was worried that, having stayed in one town for three years, he would find her again. The family hit the road. This time for Salem.

Coyote felt that she was a floater in Salem, “not here, not there but still trying,” she said.

Soon enough, a representative from the Oregon Women of Color Caucus called, asking if she was interested in contracting with the group. They were lacking in Native Americans in the group and they wanted her help filling that role. She accepted and became its director in 2000.

She also joined Gov. John Kitzhaber’s council on domestic violence, becoming the only Native American woman on the council. She started traveling around to communities of color and tribal nations, hearing from survivors and seeing what services were lacking. In time, the state called on her so much that she considered herself its “token Indian.”

“I was invisible on these teams, but they needed me to represent communities of color and tribal nations,” she said. “I was an object, not something that was important. My voice often was not heard.”

In 2001, her mother fell ill. She started driving home to the Umatilla Indian Reservation every weekend to take care of her. Though they had been apart for the majority of Coyote’s upbringing, she had always appreciated how hard her mother had tried to be there for her children. After Coyote’s mother died in 2002 at the age of 62, Coyote moved into her mother’s home on the reservation.

She took a job as the tribe’s domestic violence coordinator. She began learning about tribal jurisdiction, law enforcement and tribal courts. She started meeting with survivors. More often than not, they would be tribal members, the offenders would be non-Native, and the abuse would have occurred on reservation land, meaning that tribal authorities could not prosecute them due to a 1978 Supreme Court ruling that barred them from doing so.

Alongside law enforcement, she would drive survivors out to the spot of their alleged assault. The officer would then use maps to see whether it was on or off tribal land, and they would explain who had jurisdiction to take the case.

“This job really taught me what it means to be an Indigenous woman,” she said.

At the same time, Coyote began learning about tribal customs and traditions. Having grown up in her father’s home and attended boarding school, she knew little about the traditions of her people. But when she moved to the reservation, she met with elders, attended powwows, and learned about dancing, drumming, singing and tribal regalia. Her mother’s land and the people there made her feel at home.

But much of Coyote’s most notable work has been behind closed doors, away from courtrooms, legislators and police. It has focused instead on the untold number of survivors whose lives she has touched.

Coyote changed her last name from Cruz to Coyote in 2012.

Coyote still searches for any record of what happened that night in 1991, some written acknowledgment that, for her, reaffirms what happened. What records she finds she keeps in a corner of her shed, far enough back so she won’t stumble on them. She keeps them stacked next to the journal she has kept for years, which she used to prove her story of struggle with her children. 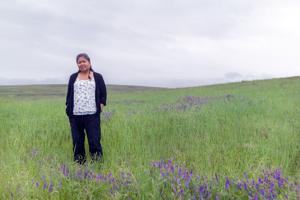