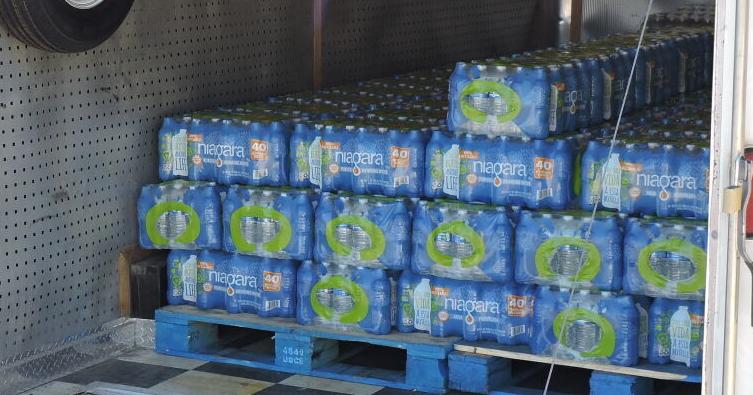 BOARDMAN — Morrow County stated in addition to providing clean water for Boardman area residents with contaminated wells it plans to provide filters for up to 350 homes in the area.

Morrow County Commissioner Jim Doherty said the county was receiving its first shipments of filters Thursday, July 14. It will make them available next week. People may, he said, pick them up or schedule a county employee to install them.

He added there will be no cost to people who need the filters, and he will have more details about availability next week.

This is the latest move to deal with the crisis of nitrogen-tainted wells in the Boardman area after the Oregon Department of Environmental Quality fined the Port of Morrow for applying excessive nitrogen from its wastewater to farmland in the last decade on top of the area’s contaminated aquifer.

“This isn’t really an emergency of our own making, but once we recognized the public health emergency and information emergency, we’ve got to do something, at least in the interim,” Doherty said.

Morrow County commissioners on June 9 declared a local state of emergency due to the water crisis. Help has come to Boardman residents from different directions, Doherty said, and more is expected.

In response to the water troubles, nearby entities gave assistance or at least offered help. The city of Hermiston promised fresh drinking water to Boardman residents.

The city of Boardman stated it would make city water available to people in need. It opened a fire hydrant at Sam Boardman Elementary in Boardman. Sitting in front of the school, Oregon Rural Action community organizers have been distributing clean city water.

ORA also has received additional water samples from people for testing, work that will continue into the foreseeable future.

Additional sample collection sites, at the Morrow County Government Center in Irrigon and Boardman Foods in Boardman, also have given away water.

Morrow County contracted with Desert Springs Bottled Water Co. of Echo to deliver water to people with tainted wells. Each home in need could receive 4 or 5 gallons of water every two weeks, he said. How much that will cost remains a question.

Doherty said the county is discovering greater and greater nitrate contamination in an increasing number of homes. He said he has recently seen test results with nitrate levels in the 50 to 60 parts per million range outside both Boardman and Irrigon.

He said Desert Springs scheduled water bottle delivery to around 60 Morrow County homes starting July 9, but the number of customers could jump up to 200 within the next week and even more soon after that.

Given the potential for change, the commissioner stated he couldn’t estimate the county’s cost.

And while Desert Springs is providing a valuable service, Doherty said, the water deliveries remain a “stopgap.” Both deliveries and the pickup sites, he said, will eventually terminate. It could be three months, he said, as the county makes other plans.

A longer-term solution, he said, is installing the filters onto kitchen taps in people’s homes.

Morrow County Emergency Management on June 16 sent a letter to the city of Irrigon.

“Morrow County would like to officially request to use city water in its efforts to distribute clean cooking and drinking water to the rural residents of Irrigon who have a domestic well within the 97844 ZIP code and whose water has been tested and shown to be above the Center for Disease Control and Prevention’s (CDC’s) recommended levels of nitrate,” states the letter from Morrow County Emergency Manager Paul Gray to Irrigon City Manager Aaron Palmquist.

The Irrigon City Council discussed the request at its June 21 meeting and voted to authorize the sale of city water to Morrow County.

Palmquist in a letter June 22 to Gray outlined an agreement for city staff to fill water containers and distribute water.

Water fees would be $0.025 per gallon. The county also would need to pay a deposit of $900, with $750 being refundable, according to a request form with Palmquist’s letter.

Irrigon’s city manager on July 7 said he had not heard back from the county about the matter. Irrigon had not opened a hydrant, and the county’s water distribution site in Irrigon was handing out bottled water.

Doherty stated he didn’t hold anything against the city. Irrigon has economic concerns of its own, he said, and it’s completely within its rights to offer to sell water rather than gift it to the county. Doherty added the county was pursuing alternative efforts to bring fresh water to local people.

Educating the public remains a priority

While the county makes further efforts to test samples, distribute fresh water and schedule filter installations, the commissioner said there is work to do in making more people aware of the problem.

Doherty said that, a month into the emergency, he is still encountering local people who are unfamiliar with the problem.

“They’re wondering what this well-sampling is all about,” he said.

He added the county is planning to mail information to homes in the county. 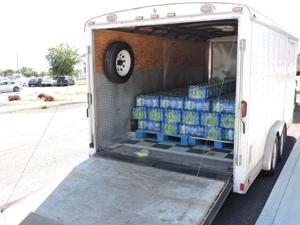